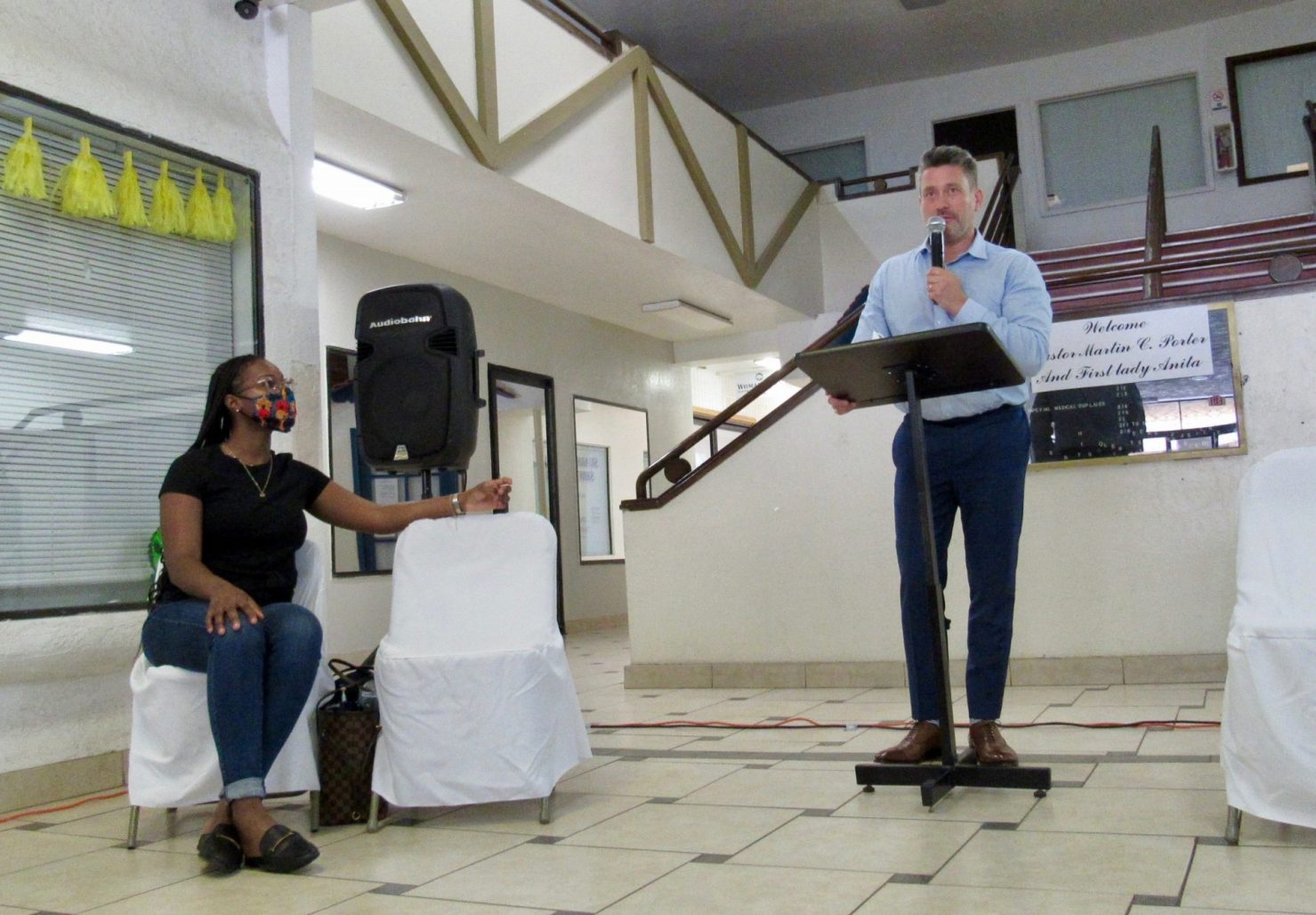 Anita Porter watches her husband, Pastor Martin C. Porter, the newest minister of Johnson Chapel-African Methodist Episcopal Church in El Centro, as he thanks everyone who came to a surprise welcome event in their honor at the Imperial Valley Social Justice Committee office in downtown El Centro on Saturday, Aug. 28. | MARCIE LANDEROS PHOTO
Home
Regional News
In Regional News

EL CENTRO — Community leaders from around the Imperial Valley showed a more intimate side, sharing what drives them as they welcomed the Social Justice Committee’s newest member, Pastor Martin C. Porter, and his wife, Anita, to the Imperial Valley.

“It was very unexpected. We are so overwhelmingly grateful and are feeling so blessed,” Anita Porter said in an interview after the event. “It was such a warm welcoming, and I don’t think anybody could have asked for anything better than this. El Centro has truly welcomed us.”

The tone for the event was set by Black Lives Matter Imperial Valley Chief Executive Officer Hilton Smith, who shared that he was very excited when he heard that Pastor Porter was not only a pastor, but an activist as well, promising to “put him to work.”

Smith then went on to shed light on what drives him, as he presented him with a Black Lives Matter t-shirt.

A few moments later, when El Centro Police Chief Brian Johnson approached the microphone holding a mug with pens in it, he had to pass Smith on his way. In order to add a little levity to what could be a tense moment, Johnson teased Smith.

“We always have to one up each other, right?” Johnson joked.

The room broke into laughter as he reached his destination, where he welcomed Pastor Porter, and invited him to join the El Centro Police Department’s clergy council, so it may better serve the people of faith in El Centro.

He went on to share what, in Chief Johnson’s opinion, makes Imperial County different from other communities.

After the event, Pastor Porter explained that for him, his reasoning for joining the Imperial Valley Social Justice Committee came out of his faith.

“Well, AME, the African Methodist Episcopal Church, stands for social justice. That’s a hallmark of our denomination, so pretty much de facto AME Church is going to work hand in hand with social justice committees,” he shared. “So that is a hand-in-glove fist for us.”

The city of Calexico made a strong showing as well, having three representatives from three different facets of the community who came to welcome the pastor, including interim San Diego State University-Imperial Valley campus Dean Mark Wheeler, Imperial Irrigation District Director Javier Gonzalez, and Police Chief Gonzalo Gerardo, who quietly announced his retirement while welcoming the pastor.

Gerardo assured the crowd that he wouldn’t be going anywhere, saying he wanted to continue to work with the city of Calexico in whatever way his retirement would allow. He also expressed a desire to connect with his roots, after discovering that he is almost half Kumeyaay and Pai Pai, which are tribes that historically lived in the Imperial and Mexicali valleys, saying, “Now when people call me indio, I am more than happy.”

Gonzalez shared with the pastor, “On behalf of the Imperial Irrigation District, welcome to the Imperial Valley. I know you will find very friendly people here. I have always thought that faith-based organizations are the backbone of the community. Whether it’s homelessness, or broken marriages, it’s not the government that is the answer, it’s faith-based organizations.”

Tomas Oliva, mayor pro tem of El Centro, was in attendance alongside fellow El Centro City Council member Martha Cardenas-Singh. They encouraged working with city leadership for the betterment of the community.

“I agree, to an extent, with Mr. Gonzalez that faith-based organizations are a large part of the answer that we are looking for, but government can be a part of it,” Oliva said, after sharing his personal connections to the AME Church. “So, we are here to work with you to assure that the lives of your congregation and the other residents here’s lives improve for the better and please, look at us as partners. And again, welcome to El Centro.”