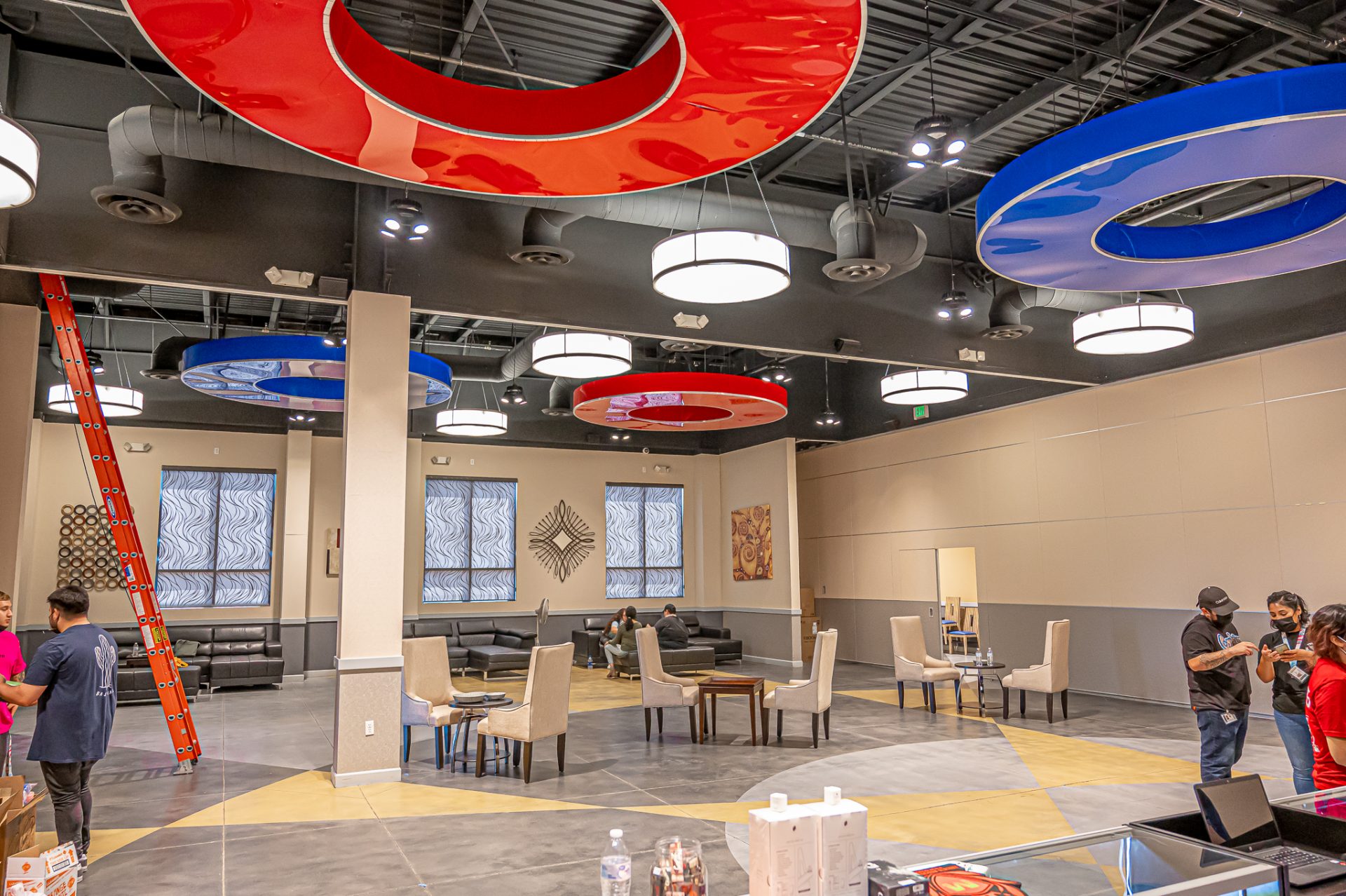 Final preparations were underway, and training of staff was occurring on Aug. 19 at one of two Cannaffornia consumption lounges and dispensaries located at the Impe-rial Center east of Heber off Highway 111 and Heber Road. | CAMILO GARCIA JR. PHOTO
Home
Business
Share

The first phase of the most ambitious and expansive operation opened recently on the premises of the former Imperial Center at the intersection of Highway 111 and Heber Road.

One part of the operation, dubbed Cannaffornia, is a lofty project that borrows from the wine industry’s playbook. Consumers will be able to sit down and order cannabis products grown and manufactured (eventually) on site, as well as those from other companies.

Cannaffornia’s two consumption and retail lounges, Queen of Dragons and The Other Guys, are now open. At 9,000 square feet each, they are more than twice as large as the next-largest cannabis project in Imperial County, a 3,638-square-foot online retail project called Grasshopper Delivery, located in the Gateway to the Americas area east of Calexico near the east Port of Entry.

Phase 2 of the Heber-area project is scheduled to open in “fall 2021.” It will include a 4,500-square-foot distribution center, 4,500 square feet of manufacturing space, and 40,000 square feet of indoor and greenhouse cultivation space, according to Tim Wright, chief executive officer of Cannaffornia’s developer, Shasta Management. All of the permits for the various DBAs for the Cannaffornia project are tied to Wright.

Cannaffornia is expected to raise much needed tax revenues for Imperial County, and breathe new life into the shuttered Imperial Center, which went into receivership in 2018 after investors took their business elsewhere and the county and others sued. Cannaffornia has a 20-year lease on its sections of the property, according to Wright.

Although cannabis operations in California have been legal since 2016 thanks to Proposition 64, industrial-scale cultivation and distribution have yet to get off the ground in the Imperial Valley. Today, what is seen all around the county are retail storefronts, delivery services, and speculative plans to make this, grow that, and ship here or there.

At least for Cannaffornia, there are significant questions about plans to distribute its products.

Beyond Retail: Is Distribution Even Possible?

The distribution component of Cannaffornia’s plans is key to its growth — but are they realistic?

Wright so far submitted six applications for cultivation at 1168 Yourman Road in Heber. But as of Friday, Aug. 27, Imperial County Planning & Development Services has not received any applications for distribution or manufacturing at this location.

To date, distribution among Imperial County cannabis projects has been spotty, and it doesn’t appear that any permits to do so have resulted in tangible results.

In late June, the Calexico Planning Commission revoked its sole active distribution permit tied to one of the first projects to establish in the city’s Cannabis Overlay Zone: Calexico Distribution Co., the shipping arm of manufacturer Trinity 341 LLC, which went out of business and closed and sold off its assets and permits to other investors.

Trinity’s retail permit passed over to new owners, who opened the retail storefront MexCal Factory in spring 2020, and Calexico Distribution Co. requested the revocation of its permit for lack of use and the company going under.

On paper, Cannaffornia’s location couldn’t be better for distribution. Highway 111 is a vital transportation artery between Mexico and Southern California. Thousands of vehicles traverse the highway between the Calexico Port of Entry and Palm Springs every day.

If the number of marijuana transportation and logistics companies that cropped up since recreational cannabis was legalized with Prop. 64 is any indication, there is significant money to be made in that field.

But Cannaffornia is hemmed in by U.S. Customs and Border Protection checkpoints on Highway 86 north of the facility, and on Interstate 8 on the way to San Diego.

CBP agents at the Highway 86 checkpoint seize thousands of pounds of illegal drugs every year. Although cannabis is no longer illegal to possess or consume under California law, the federal government still classifies marijuana as a Schedule 1 substance alongside heroin and LSD.

In short, it is illegal to possess or transport marijuana in the eyes of the federal government. Just how Wright proposes to get his products from the Imperial Valley through federal government checkpoints to customers across California is not clear.

“State laws that decriminalize marijuana do not preclude the federal government from enforcing the provisions of the Controlled Substances Act. CBP law enforcement personnel continue to possess authority to arrest individuals and seize property for forfeiture based on violations of these laws,” a CBP spokesperson stated in an email to the Calexico Chronicle.

How genuine of a statement that is, considering the planned size of the cultivation center and distribution model, remains to be seen.

“At the federal level, it’s a controlled substance. At the state level it’s not controlled. It’s a taxable substance,” Imperial County District 1 Supervisor Jesus Escobar said recently. “We decided to move forward (with Cannaffornia) for potential tax revenues. But we do have an issue with the transport because it’s controlled substance and it’s going through a federal checkpoint.”

Wright isn’t new to the cannabis business. He opened the Queen of Dragons dispensary in Shasta Lake in 2009, and quickly learned that retail sales would not sustain business.

“We needed to go vertical,” Wright said. “We got into cultivation and manufacturing. Sixty-five percent of the things we retail are of our own making. We’ve stayed competitive, because of vertical integration.”

Imperial and Shasta counties have populations of about 180,000, but Cannaffornia’s location at the intersection of Highway 111 and Heber Road should be the better of the two locations for business.

“When I looked at the overview, we’re geographically isolated up here,” Wright said of Shasta Lake. “In Imperial (County), we have the (Interstate) 8 instead of the 5, and the (Highway) 111. We have proximity to Mexico. A lot of people come into California.”

The cannabis cultivation portion of the plan is ambitiously large at 40,000 square feet of indoor and greenhouse space, a size equivalent to just under three quarters of a standard football field.

Illicit marijuana growers across California are tapping into fire hydrants and pulling water from rivers and private wells to water their crops. Although marijuana isn’t particularly thirsty, California is in a drought, and there isn’t enough water to go around.

But Wright maintains he doesn’t have to worry about water or power. Shasta Management worked with the Imperial Irrigation District to install meters and transformers that provide a capacity of up to 25,000 amps and received a unanimous resolution from the Heber Public Utility District board to obtain access to water.

“We spent the past few months getting everything fixed. We have water and power turned on, and we did the fire inspections,” Wright said.

Wright has hired more than 40 people for his Heber facility for “bud tending,” management, and inventory control duties, among other tasks.

Some of the space will be turned over to other companies to set up shop, the business model behind The Other Guys storefront.

“Each brand is building their own ‘vibe center’ at Cannaffornia, whether it’s (Cypress Hill rapper) B-Real (Dr. Greenthumb products) or (rockers) System of a Down’s 22Red. People will be able to see their products and try their products, like wine,” Wright said.

Also, Shasta Management was integral in working with the county to modify the existing tax structure making it more competitive for cannabis operators. The tax structure includes rates of $3.50 square feet for cultivation, 5 percent of gross receipts for manufacturing, zero percent distribution tax and an 8 percent retail tax.

Rise and Fall of Imperial Center

Perhaps it is fitting that Cannaffornia moved into the former Imperial Center. It, too, was wildly ambitious and successful for a period of time.

The Imperial Center was developed on an EB-5 Immigrant Investor Visa Program site. The project’s developer, James Lo, recruited businesspeople from China to invest $500,000 in the project in return for a visa to come to the United States, said Imperial County District 5 Supervisor Ray Castillo, whose district includes the center.

Imperial butts up against Castillo’s district and Supervisor Escobar’s district.

“It was a legitimate investment site, and it was doing well. In fact, it was a big benefit for the county,” Castillo said, who was often the lone supervisor still supportive of Lo even after the project began to fall apart.

“Gasoline sales were through the roof. Mr. Lo was making a good profit. The gas station was probably the No. 1 ampm in Southern California in sales. A lot of that had to do with the site catching cars southbound to Mexicali,” Castillo said in a recent interview.

Some 160 people were employed at the Imperial Center’s peak, all five restaurants on site had reservations a year out, and more Chinese investors were queued up, he said.

The county was so bullish on the project that it approved a $2 million loan from the Community Benefits program. But the Trump administration put the brakes on the EB-5 program, effectively pulling the rug from under Lo’s feet, Castillo said.

With Lo unable to repay the loan, the county filed a notice of default and sued, and the case remains in the courts.

Presently, the Imperial Center is under court-ordered receivership, and the property is being managed for the interests of its lien holders, one of which is Imperial County. Cannaffornia is renting the property from the receiver.

“The property is for sale,” Castillo said. “The receiver is working to sell it. Ideally with the leases on the property, the dispensary, it brings up the value on the property because there’s revenues. Hopefully, we’ll get a really good buyer.”

Next
Imperial Pot Shop Gets Green Light to ‘Grow’