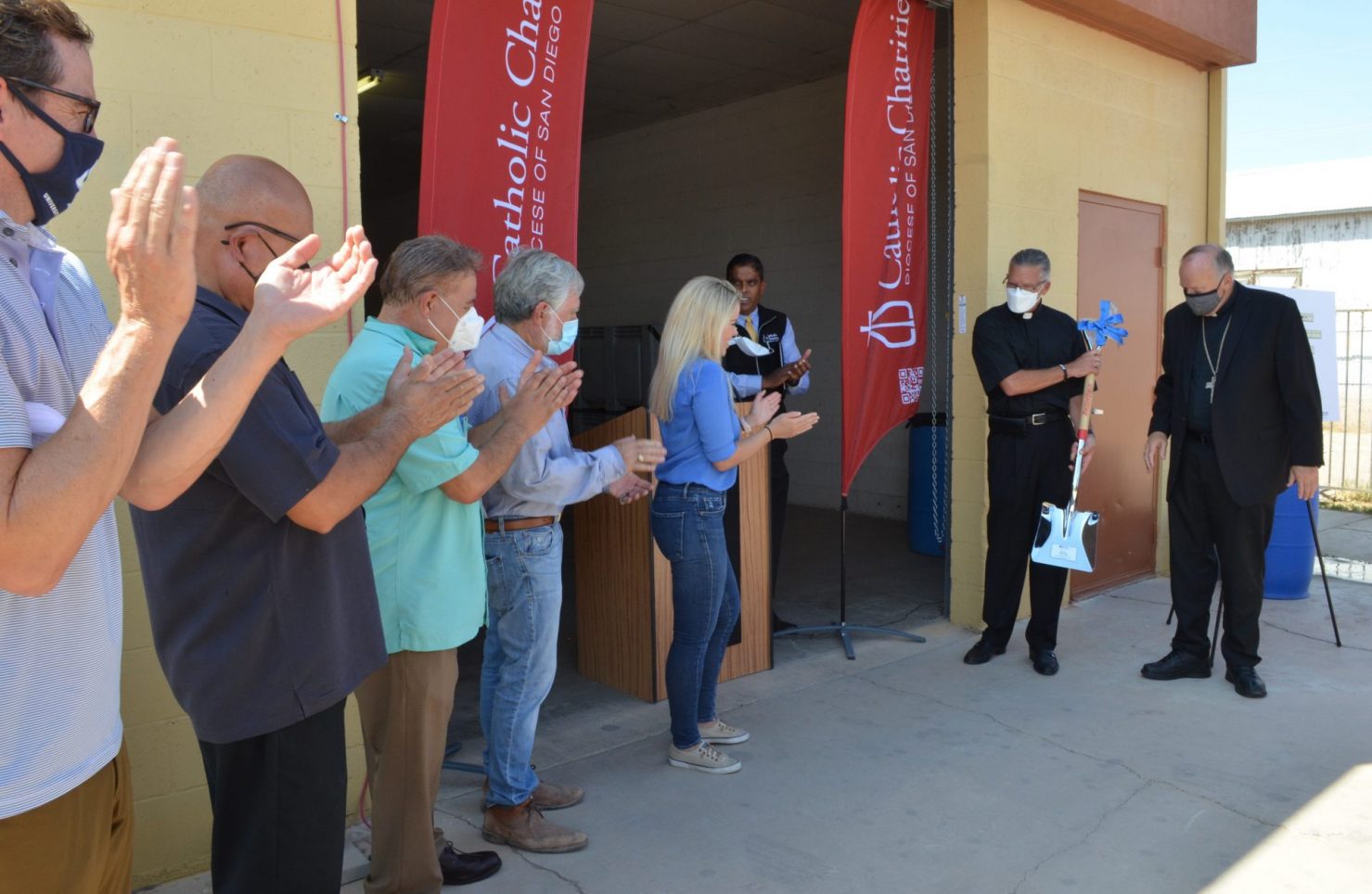 EL CENTRO — For a time, El Centro resident Richard Enriquez counted himself among the individuals with substance abuse problems who called Adams Park their home.

These days, he spends his time ministering to those same individuals, but now as a member of Our Lady of Guadalupe Catholic Church’s homeless ministries.

Enriquez said his turnaround was made possible with the recovery program at Brother Benno’s Center in Oceanside, which was founded as a soup kitchen in 1983 but has since expanded to provide additional services for the less fortunate.

On Monday, Aug. 30, as a few dozen gathered for the groundbreaking ceremony for the homeless day center that Catholic Charities Diocese of San Diego will build at its offices at 250 W. Orange Ave., Edney credited Enriquez for being part of the inspiration for planned facility.

During his remarks, Edney also reminded those gathered of how anyone can experience a reversal of fortunes and the importance of serving the poor and less fortunate.

“You remember your roots and you remember how precarious the success of anyone of us is,” Edney said.

For his part, Enriquez said the planned $2.5 million facility will be a “blessing” that will provide homeless individuals cooked meals, a place to shower and do laundry, as well as referrals for services from other local stakeholders.

“They’re out there on the street right now and they don’t even know how many people really care for them,” Enriquez said following the groundbreaking ceremony. “They’re not forgotten and they think they are.”

The planned day center was made possible with a $2.5 million forgivable loan that the Imperial County Board of Supervisors approved in May. The funds come from a state Homeless Emergency Aid Program grant administered by the Imperial Valley Continuum of Care Council, which addresses countywide homelessness issues.

The day center, which will be a prefabricated modular building, is expected to be completed in about three months. Officials indicated they hoped to celebrate its grand opening by Thanksgiving.

It will include a commercial kitchen, cooler and freezer, and dining area that can seat up to 78 individuals at a time. A laundry room and men’s and women’s showers and restrooms are to be included, as well as a meeting space, lobby, and office space for personnel.

The facility’s amenities are loosely based on a similar facility that Catholic Charities operates in the city of San Diego for homeless women, said Antoinette Fallon, Catholic Charities director of homeless services. Yet because of the Valley’s unique circumstances, some changes were made.

“We can’t just take a model from San Diego and drop it into this community and expect it to work,” Fallon said following the groundbreaking ceremony. “We have to hear what do people in Imperial County need and how can we best respond to their needs.”

Already, Catholic Charities operates separate men’s and women’s homeless shelters in Calexico and El Centro, respectively. Though the planned day center will not house individuals, it will provide essential and wraparound services to both homeless women and men.

“Hopefully, this becomes a feeder, a gateway to the shelters that we have available,” CEO Pajanor said in an interview after the groundbreaking ceremony.

With the establishment of the day center now underway, Catholic Charities will now turn its focus to further partnering with local stakeholders to add additional infrastructure to help meet the needs of the region’s homeless individuals.

“Our next project is to create a road from the day center to a night shelter and from the shelter to permanent housing,” Pajanor said.

In 2020, 1,527 people were reportedly homeless in Imperial County, according to the Point-in-Time count. The annual count provides a snapshot of the Valley’s homeless and is done on the same day throughout the country to get a clearer picture of homelessness in the U.S.

It did not take place locally in 2021 because of the COVID-19 pandemic.

Following his appointment in 2015, Diocese of San Diego Bishop Robert McElroy had visited the Valley’s parishes and soon came to observe just how close members of the community were.

While acknowledging that some of that intimacy is due to familial relationships, a large part of it should also be considered a reflection of the community’s collective good and desire to serve the those less fortunate.

“Today symbolizes the reality that the community is acting out of that principle,” McElroy said during his remarks to the crowd on Monday. “That’s what this project is testimony to.”

Like those that spoke before him, county Board of Supervisors Chair Michael Kelley characterized the planned day center as a reflection of local stakeholders’ good intentions and called the project’s groundbreaking a “monumental day.”

He, too, credited stakeholders, alluding to them as the proverbial “village” that it takes to address a serious issue such as homelessness.

Kelley also implored those gathered to briefly consider the plight of the region’s homeless individuals, who at the moment must contend with dangerously high temperatures, uncertainty about one’s immediate and long-term plans, and the perception that the wider community is indifferent to their situation.

Such indifference, Kelley said, runs counter to humanity’s responsibility to take care of one another.

“That’s our first responsibility and we as a community are doing what we can for our fellow man: those people in need,” he said.