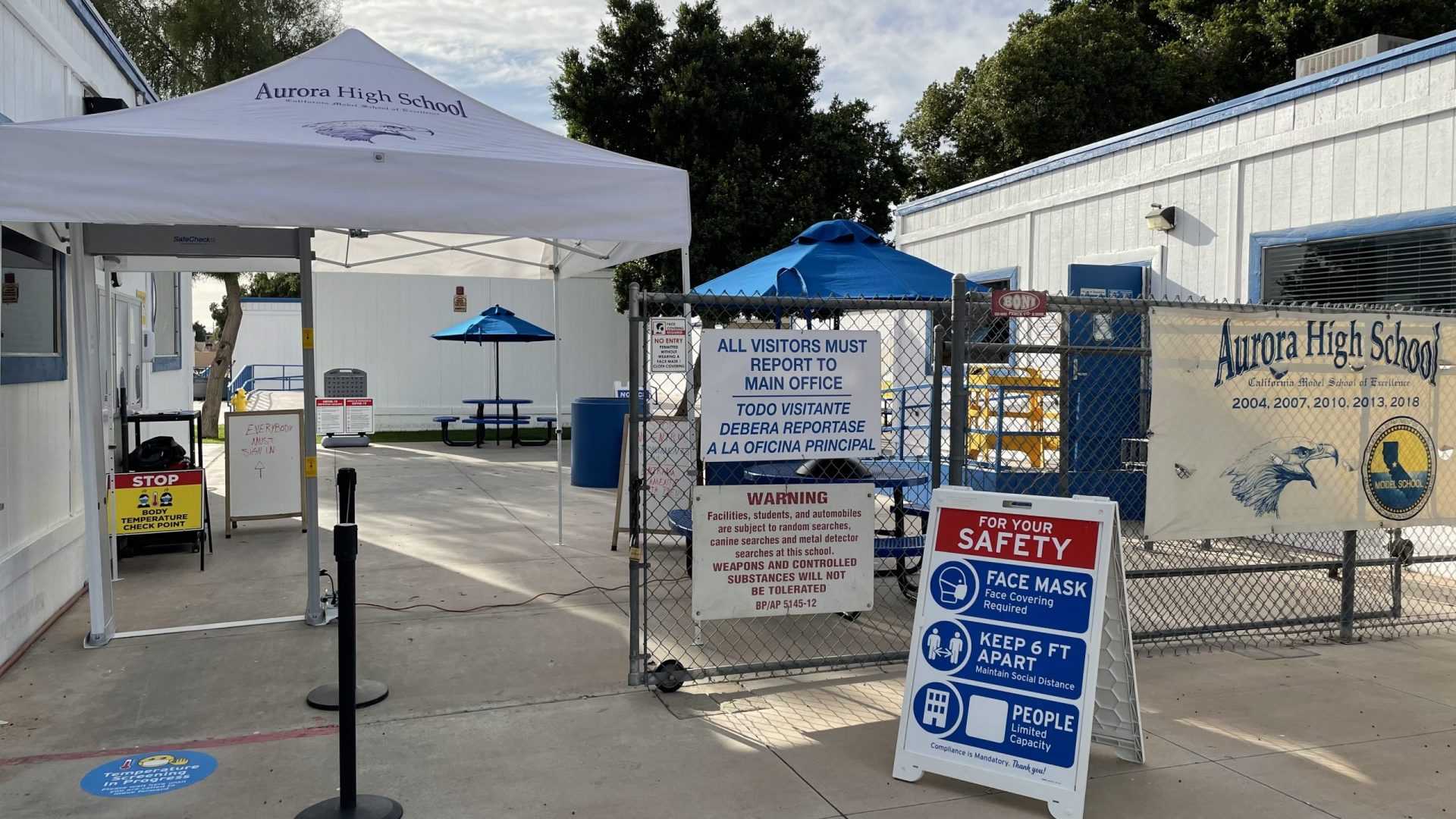 The entrance to Aurora High School in Calexico is shown in March. Aurora had three COVID-positive cases recently, and possibly a fourth, but so far Calexico Unified School District and Imperial County Public Health Department officials do not consider that an outbreak. | PHOTO COURTESY OF AURORA HIGH SCHOOL
In COVID-19EducationRegional News

Social Media Seems to Be a Breeding Ground for COVID Conspiracy, or At Least Inaccurate Info

CALEXICO — Even with COVID contact-tracing letters sent home to affected parents, the lion has been let out of the cage in knowing what truth is and what are unintentional distortions.

Home to the largest school district in the Imperial County with just under 9,000 students in what has been the hardest-hit of the Valley’s cities throughout much of the pandemic, the rumor mill in Calexico is grinding at full speed.

Not that anyone could blame parents; they’re scared, they don’t want their children to become ill, and social media has given them a platform to express their anxieties.

“There’s a lot of bad information out there, although it might have some truth to it. … Sometimes all it takes is one parent to say there is a sick kid at Rockwood,” Calexico Unified School District board President Ciro Calderon said as an example, “and then the next parent says that Rockwood is going to close.

“It’s not bad information, it’s inaccurate information. Do I blame parents for worrying about their kids? Absolutely not, and I think we can agree on that,” Calderon said during an interview on Wednesday, Sept. 1.

The truth is, that no schools in Calexico have closed or were near closure as of Wednesday midday, but there was a total of about 20 COVID positive cases spread among the district’s nearly one dozen campuses, with some schools seeing more infections than others, Calderon said.

What isn’t the truth, are the reports that there are numerous infections at elementary campuses like Jefferson, where one parents posted that there were eight COVID positive students in a first-grade class.

That is completely not true, Calderon said, further illustrating the multiplier effect that inaccurate or misinterpreted information can have.

“If parents are receiving these letters, it doesn’t mean their child is sick,” Calderon said, adding the letters are to warn parents and staff within proximity to someone who has received a positive COVID test may have been exposed.

The one campus in Calexico that has what is thought to be the most confirmed positive cases is Aurora High School, where there have been three positive cases and, as of Tuesday, Aug. 31, another suspected positive case. But even then, no outbreak has been declared by the Imperial County Public Health Department.

“On Wednesday, August 25, 2021, CUSD and the Aurora administration and staff became aware of positive COVID cases on campus. As soon as the information was received, the individual/s were sent home, and contact tracing was completed. All Aurora staff, students, and parents were sent a letter notifying them of an individual/s with a positive COVID-19 test,” according to a statement from Superintendent Carlos Gonzales.

“Additionally, those individuals who may have been further exposed received an additional letter with instructions on testing requirements and when they may return to campus. Furthermore, as per AB 685, all identified COVID-19 positive cases have been reported to the Imperial County Department of Public Health to be investigated,” the statement continued.

“As per (county Public Health Director) Ms. Janette Angulo, several factors, such as vaccination status, masking, etc., are taken into consideration before closure is determined. We are awaiting further guidance regarding the status of the Aurora High School campus,” the statement from Gonzales reads.

On Tuesday afternoon, Public Health spokesperson Maria Peinado said the department was in “constant communication with staff at Calexico Unified” and was investigating the situation.

“An outbreak is when there are three or more laboratory-confirmed cases of COVID-19 among individuals who live in different households within a 14-day period. Regardless, all student and staff cases are reported to the Public Health Department. Employee cases are also reported to Cal/OSHA, as appropriate,” Peinado stated in an email.

She added that just because there are three confirmed cases “doesn’t necessarily mean that you have an outbreak.”

Although he wondered whether posting these letters was somehow running afoul of privacy laws, they were at least giving the impression of a “false positive,” meaning they were leading people to believe that possible exposures were somehow definitive results of spread.

“We don’t know if that kid (whose parent gets a letter) is actually sick, that’s why we refrain from telling a classroom full of students,” Calderon said. Still, “I am not disregarding parents’ concerns. I agree with them.”

Next
Missing Motorists Washed Away Near Palo Verde Area