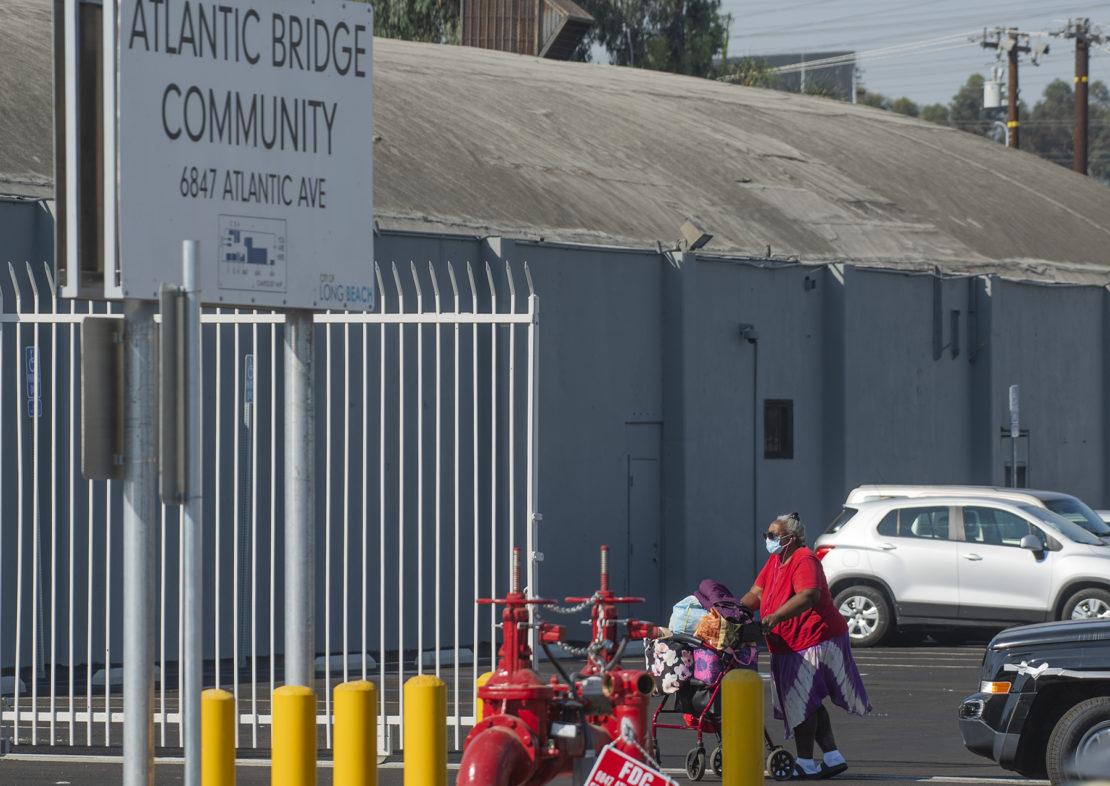 A woman walks into the new Long Beach homeless shelter, Atlantic Bridge Community, as the homeless are allowed to move in on its first day of opening in Long Beach Thursday, October 1, 2020. Photo by Thomas R. Cordova.
Home
California
In California

Has Homelessness Increased in Long Beach? Most Agree, Yes

“We agreed to the homeless shelter because we thought it would help get homeless people off the street,” Renette Mazza, who serves as president of the Hamilton Neighborhood Association, said.

But a handful of residents in the Hamilton neighborhood believe the homelessness crisis has gotten worse in their neighborhood over the last two years.

The COVID-19 pandemic prevented health officials from collecting up-to-date numbers on who is homeless in the city. That lack of data has made it difficult for health officials to accurately say if more people are homeless in Long Beach, however, some experts argue that there are.

“What is clear is that the visibility has definitely increased from previous years,” Paul Duncan, Long Beach homeless services officer, said. “I would not argue [with] anyone saying that it appears that there is an increase. We have seen a significant number of new people coming in for services.”

Duncan and other health department officials attribute the city’s challenge to meet the needs of the homeless to the pandemic’s side effects on job security and the ability to house people in congregate settings.

“The pandemic in many ways has set us back in our efforts to address the homeless in Long Beach,” Health and Human Services Director Kelly Colopy said during a recent City Council meeting.

The pandemic did provide a silver lining for the city’s future response to homelessness, Colopy said.

An influx of federal and state funding has allowed officials to plan future homeless shelters and housing programs, but health officials face a steep challenge.

The U.S. Department of Housing and Urban Development 2020 Annual Homeless Assessment Report showed that over 580,000 people were counted as homeless during the national 2020 point-in-time count, representing a 2.2% increase over 2019. The point-in-time count took place in January, just before the pandemic brought on economic disruption and housing instability.

Long Beach numbers for 2021 are not available because a point-in-time homeless count did not take place in the wake of the pandemic. One is expected to take place next year.

Duncan reported that the city did, however, conduct a shelter count in which the city saw 200 more people staying in shelters in 2021 compared to 2020.

At the county level, officials saw a 35% increase in people staying at shelters, from 800 people to 1,083, between 2020 to 2021. The data does not include Long Beach numbers, but it does include surrounding cities and along the border.

A woman walks into the new Long Beach homeless shelter, Atlantic Bridge Community, as the homeless are allowed to move in on its first day of opening in Long Beach Thursday, October 1, 2020. Photo by Thomas R. Cordova.

Shelter space in Long Beach before the pandemic was scarce.

The only walk-up shelter the city had at the time was the winter shelter, which had 125 beds in West Long Beach, according to health department spokeswoman Jennifer Rice Epstein. The county operated the shelter in partnership with the city, which opened on Dec. 6, 2019 before closing on March 31, 2020.

Combined, the two temporary shelters provided the same number of beds the winter shelter provided before closing. To offer even more space, the county launched Project Roomkey and Project Homekey. The two combined provided a total of 88 motel units to people who were given vouchers to stay.

As COVID cases began to jump, health department officials reduced shelter beds in an effort to keep people apart to stop the spread of the virus, which reduced the number of people a shelter could take in.

Temporary shelters also closed when the North Branch Library opened, which previously operated as another winter shelter. The 100-plus bed spaces that shelter provided were reduced, and about 65 people were housed there at any given time, officials said.

Insufficient income, loss of a job, family disputes and mental health issues drove many people into homelessness, Colopy said. The city’s 2020 report showed that nearly half of homeless people said it was their first time living on the street.

Jails and prisons also released people with nonviolent offenses, but there was little or no additional housing services to meet their needs, leaving many of them homeless as well, officials said.

The CDC then ruled that encampments were seen as households and ordered cities to not tear them apart.

“We began hearing about more encampments, as CDC guidance called for a pause in encampment clean ups and camp destructions to avoid communal spread of the virus,” Colopy said.

That’s why the city put so much hope into the Atlantic Farms Bridge Housing Center, which opened in North Long Beach in the middle of the pandemic.

It was designed to be more than just a temporary shelter and would provide services to lead people towards permanent housing.

“The opening of Bridge Housing in Uptown reflects our community’s compassion and leadership in addressing a critical issue in our city, our capacity to deal with the homelessness and its effects on our community,” North Long Beach Councilman Rex Richardson said in a statement the day it opened on Oct. 2, 2020.

But social-distancing protocols also reduced the number of people the housing center could serve at the time. The 125-bed capacity available at the center was reduced to 84.

Volunteers of America Los Angeles, the nonprofit group that was hired by the city to run the housing center, said there were 67 people at the center as of Aug. 11. On average, people spent about three to four months at the facility.

A nonprofit spokesman said a total of 173 people have been given temporary housing and jobs training at the shelter as of August since it opened in October.

The Atlantic Bridge housing center is not a traditional homeless shelter where people typically come in at night and are asked to leave in the morning.

People have to first be brought to the city’s Multi-service Center in West Long Beach where a health department case manager pre-screens them and determines if the housing and jobs-training programs provided at the center are a right fit.

The California Legislature is Back: What to Expect in 2022

Homelessness continues to be a costly challenge for the city, City Manager Tom Modica said during a City Council meeting on Aug. 10, however funding from the state could help cover much of the costs.

In the past year, the city has received “substantial increases” in funding as officials recognized homelessness as a public health crisis, according to Colopy, but because of the pandemic’s effects on social distancing all the available funding was not enough to help people find housing.

“The funding need is still incredibly great,” Modica said. “Affordable housing is incredibly expensive to build. Every time we open one of our shelters too, those take operational dollars to run.”

When the Everyone Home task force formed in 2018, the group had eight funding sources at its disposal for a total of $39 million. As of 2021, that’s grown to 11 funding sources totaling nearly $95 million.

The city is also looking to hire more public health employees who specialize in nursing and mental health. The homelessness division was reformed into its own bureau within the health department on June 15, which has allowed for more hiring opportunities, Colopy said.

The increase in employees in the past year, and the expected new positions, will help officials staff new homeless shelters and transitional housing programs, according to a city memo.

The health department also is looking at modular tiny homes for transitional housing as part of the Long Beach Recovery Act.

Moving forward, health officials are focusing on reducing the number of people who fall into homelessness to fewer than 1,500 annually.

“If people fall into homelessness, they can be rehoused within six months,” Colopy said.

‘People have to know we are human’: Homeless cleared from prominent encampment Downtown