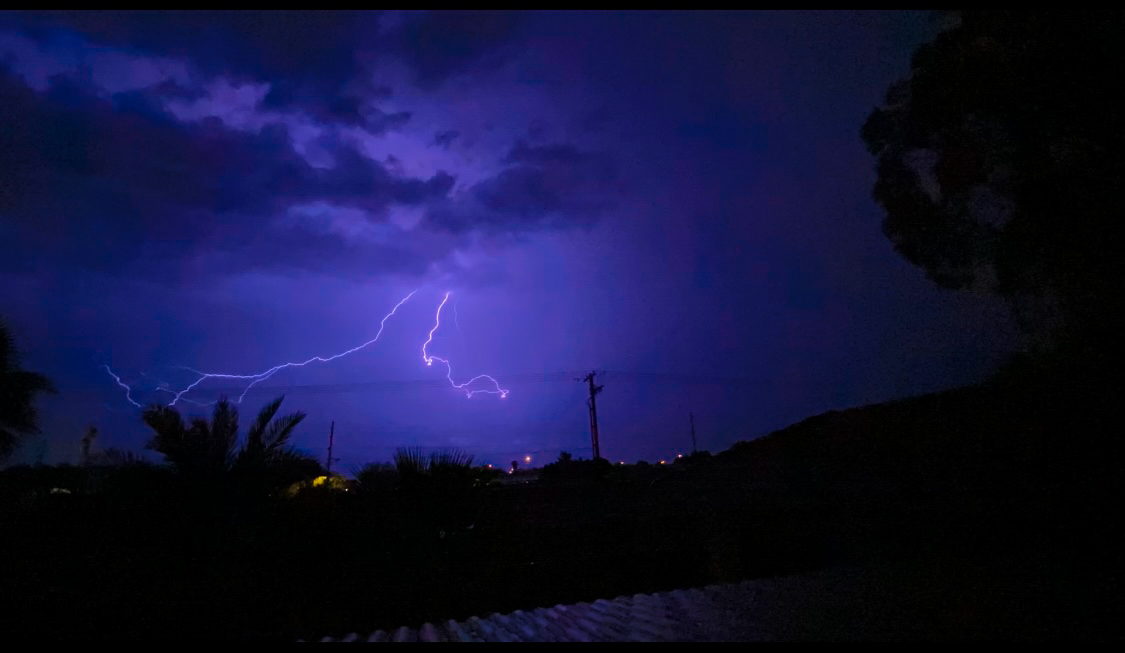 A lightning bolt can be seen brightening the skies over Calexico on Tuesday night, Aug. 31 during a storm that saw two systems, one from the northeast and one from the west, converge over Imperial County. | CAMILO GARCIA JR. PHOTO
Home
Regional News
In Regional News

PALO VERDE — A multi-agency search-and-rescue effort to locate two occupants whose vehicle was swept away by fast-moving stormwaters at the Milpitas Wash on Highway 78 on Tuesday afternoon, Aug. 31, remained ongoing Wednesday morning, Sept. 1.

A witness reported seeing the bodies of two individuals coming out of a small vehicle that had overturned in the wash about 2:45 p.m. Tuesday, according to the county Sheriff’s Office call logs.

“These types of calls are actually regular when it comes to the storms,” Chief Deputy Robert Benavidez said on Wednesday.

Though weather conditions at the time prevented responding authorities from immediately searching the area for the vehicle’s occupants, the effort got underway later that night, the county Sheriff’s Office reported.

“There’s a chance (the vehicle’s occupants) might be in the Colorado River right now,” Benavidez said.

The incident was by far the most significant to have resulted from a convergence of storms that the National Weather Service reported had dropped about six inches of rain in the area of Highway 78 and the Colorado River in far northeastern Imperial County near the Arizona border.

As a result of the downpour, Highway 78 between Palo Verde and Ogilby Road remained closed due to flooding and was not expected to reopen until Friday, Sept. 3, the California Department of Transportation reported on its Twitter account on Wednesday morning.

Elsewhere, rainfall and strong wind gusts led to temporary power outages throughout the Imperial Valley and road closures, as well as the toppling of about 20 telecommunications poles along Evan Hewes Highway between Forrester and Austin roads, officials said.

Total rainfall ranged between one to two inches around Salton City, Westmorland, and Brawley, while the area near Seeley and Plaster City experienced about two to three inches during the hours-long storm, the NWS reported.

Though the county Public Works Department was still in the process of assessing storm-related damage to its infrastructure on Wednesday morning, Director John Gay reported that some road closures were in effect.

A section of Willoughby Road between Heber and Calexico was reportedly closed Wednesday morning after branches from an adjacent stand of eucalyptus trees had fallen along the roadway, Gay said.

In Brawley, an unidentified portion of Shank Road was also reportedly closed due to the storm. Gay was out of the state and did not have all the available information when contacted for comment.

The closure of Ogilby Road was also preventing public works crews from assessing any potential damage to roadways in the Palo Verde and Walter’s Camp areas, he said.

Multiple storms first appeared shortly before 3 p.m. Tuesday near the Valley’s eastern and northern boundary, which then converged with a storm that had developed in the western part of the Valley, said Sean Benedict, National Weather Service meteorologist.

“They just kept evolving and moving around the Valley,” Benedict said.

Winds were recorded to be at speeds of about 25 mph, with gusts reaching up to 35 mph, the NWS website reported. Rainfall throughout the Valley did not let up until about 9 p.m. Tuesday, Benedict said.

Temporary power outages were reported in Calipatria, Holtville, and the Salton Sea Beach area, according to the Imperial Irrigation District’s Twitter account.

Photos and scanner reports from through social media told of traffic accidents, minor flooding, and lightning strikes. No serious damage was immediately reported nor were any fires due to lightning reported.

Just outside Holtville, some 307 customers were temporarily left without power about 8:30 p.m. Tuesday in areas around Orchard Road, Norrish Road, and Schall Road, the IID reported.