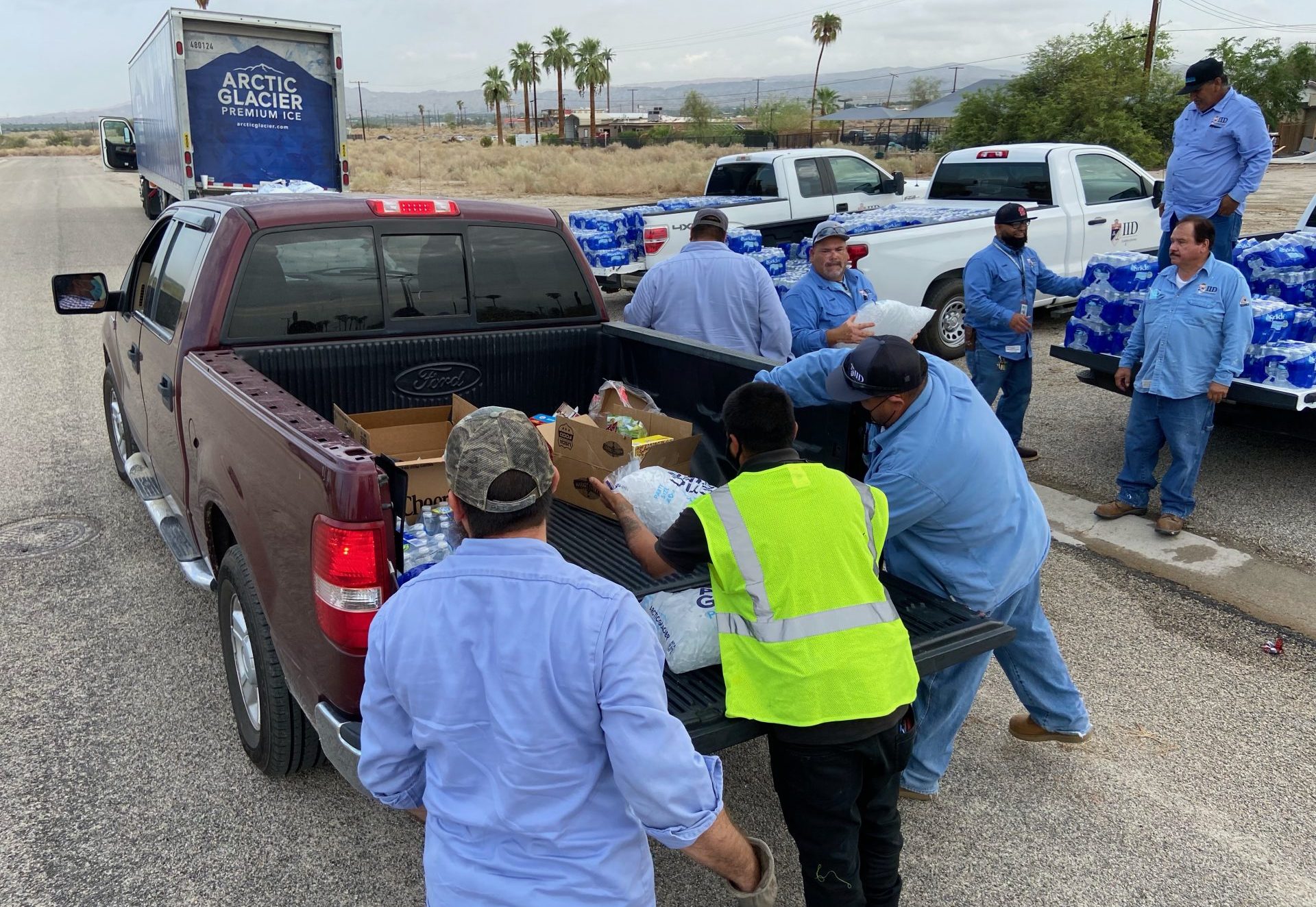 Imperial Irrigation District crews provide water, ice, and flashlights to affected customers in the North Shore area of Coachella Valley on Wednesday morning, Sept. 1, after many were left without power following a storm on Monday night, Aug. 30. | PHOTO COURTESY OF JB HAMBY
In Regional News

Remaining 412 Customers in Coachella Valley Made Whole Ahead of Schedule

UPDATE: Imperial Irrigation District worked around the clock to restore electrical service ahead of schedule to the remaining 412 customers affected by the power outage that occurred Monday evening, Aug. 30, in the community of North Shore, according to an IID press release.

“These back-to-back storms have caused major damage to our infrastructure like we have not seen in many years. For customers impacted by the recent storms, thank you for your patience as we have worked tirelessly to get your lights back on,” said IID Energy Manager Marilyn del Bosque Gilbert in a statement released Thursday, Sept. 3.

“I also want to thank our entire personnel and mutual aid partners that are on-site assisting with restoration efforts. Lastly, I want to thank Riverside County, Imperial County and all community partners who have assisted with providing support to our customers,” she stated.

Although electrical service has been restored at this time, the district’s crews, along with additional support crews, will continue making needed repairs to the damaged infrastructure to ensure the electrical-delivery system is back to normal, according to the district.

ORIGINAL STORY: The Imperial Irrigation District declared a local emergency on Tuesday, Aug. 31, after storms in the North Shore area of the Salton Sea in the Coachella Valley service area knocked out power for residents there a day earlier.

Thirty-three poles were destroyed by high winds in a concentrated area near North Shore on Monday, Aug. 30, IID General Manager Henry Martinez said during a special meeting the district quickly convened Tuesday. The poles were sheared at the base, and some were damaged up to 10 feet in the air, too. Some fell into the street, impeding movement in the area.

The district is in the process of moving those poles and conductors, with Imperial Valley and Coachella Valley crews working on the project, along with contractor crews.

On Wednesday morning, Sept. 1, Catholic Charities, partner agencies, and IID workers pitched in to deliver food, water and ice, and flashlights, as well as other needed items.

The district anticipates more than 600 customers will be without power for four days from Tuesday’s emergency meeting, Martinez said during the meeting. The district has set up a cooling center at the North Shore Yacht Club, which opened Tuesday afternoon.

In addition to Catholic Charities’ food distribution, Coachella Valley Water District has offered the use of generators for some in the area.

“Here on the ground in North Shore, IID crews have been working around the clock restoring power and providing relief to our customers affected by extreme weather conditions. IID has continually provided water and ice to everyone who needs it and additional on the ground assistance with community partners in North Shore. Through cooperative efforts with community, non-profits, and partner agencies we are working to recover from the storm damages across Imperial and Coachella Valleys where the extreme conditions have caused outages to over 9,000 customers — 6,513 in Imperial Valley alone,” said IID Division 2 Director and board Vice President JB Hamby in an emailed statement on Wednesday evening.

“Power is being quickly restored despite battling extreme weather conditions. IID is committed to working nonstop to to rebuild from the devastation and is installing even more resilient infrastructure to adapt to worsening climate conditions in the eastern Coachella Valley in particular,” Hamby added.

On Tuesday, IID’s moves were not without criticism as residents in the area asked for hotel vouchers and food cards to cover costs.

“It is currently 100-something degrees. It is hot in our homes,” North Shore resident Maria Montes said when she phoned in to the special meeting. “Our food is currently going bad in our fridge. And there’s no clear estimate from IID when our electricity is going to come back up. Electricity is vital right now. … I just want IID to be straight and clear with our community about what we can do to prevent this from happening in the future.”

Dee Gonzalez, a resident of Indio speaking on behalf of family members who live in North Shore, said the “sheer disrespect of our community and our members” is unacceptable. The district doesn’t appear to care for those with health issues who need electricity right now, she said.

“Let’s take care of who needs to be taken care of and stop playing politics,” she said over the phone.

The IID board voted 4-0 to declare an emergency, with Director Javier Gonzalez absent from the meeting.

Hamby added on Wednesday evening that the IID has done $100,000 in hotel vouchers for the vulnerable.

The outage comes after a February 2021 outage that also left many in the North Shore area without power. The board declared a local emergency then as well, and it preempted the creation of the Coachella Valley Energy Commission, which is set to look at the future of providing energy in the Coachella Valley once an agreement with IID ends in about a decade.