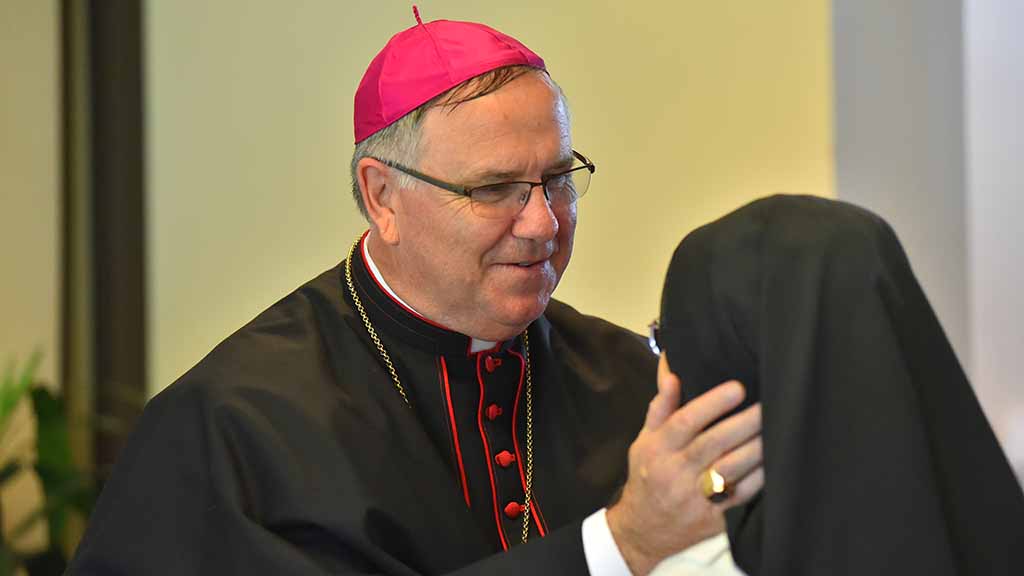 Feelings of guilt, pain and shame often settle in when friends or family members die by suicide.

When San Diego Auxiliary Bishop John Dolan presides Saturday, Sept. 4, at a Mass for Survivors of Suicide Loss, he wants you to know such feelings are shared by others.

“When we are dealing with families, we also want to make sure that they are not alone, that they can talk about this and if we can eliminate that sense of shame … then we can get about healing,” Dolan said Thursday.

Dolan knows the process all too well.

In middle school, he lost his 19-year-old brother, Tom, to suicide. In college, his sister Therese and her husband, Joe, took their own lives on the same day. And later other family members attempted suicide.

Through his own experience, Dolan decided the time had come for a Mass to bring together people who lost a friend, family member or acquaintance to suicide.

The third annual survivors Mass will be at 5 p.m. at San Rafael Parish in Rancho Bernardo, 17252 Bernardo Center Drive. Dolan isn’t aware of anything similar elsewhere in the country.

Preceding the Mass will be a 4 p.m. workshop on suicide awareness and prevention presented by Michele Madden, director of support and presentation programs with Survivors of Suicide Loss San Diego.

Suicide once was labeled a mortal sin in the Roman Catholic Church, and church funerals and burial in a Catholic cemetery were prohibited. That is no longer the policy.

In the past, there was a sense that suicide was a rational choice, he said. “There was a limited understanding of psychology” and people didn’t have a sense of mental disorder as they do today. But that mind-set has evolved.

The church still believes that taking one’s life is a “grave matter, which causes hardship not only to you as a person, you die … but it also leaves a ripple effect, and people are affected greatly. The act itself is a grave matter, but the level of culpability is diminished greatly.”

No one wants to admit that there may be a mental disorder in a family, and part of that is to protect the rest of the family, the Most Rev. Dolan told Times of San Diego.

But he had a gradual awakening about mental illness in his family. “When you admit it, you are able to manage it, able to release the sense of guilt: What could I have done to prevent this?”

Every single one of us has disorders of sorts, said the auxiliary bishop, who co-edited two books on suicide — “Responding to Suicide: A Pastoral Handbook for Catholic Leaders” and “When a Loved One Dies by Suicide.”

“When we begin from that angle, then we realize some have it to a greater extent,” he said. “But I begin with the premise that we are all disordered in some fashion.”

Some mental illness has chemical roots and can be treated.

“The more that we talk about that, the better it is because we can say, ‘There’s help around the corner.’ The first step is to realize that we are not alone,” Dolan said.

At Saturday’s Mass, participants will place a flower — representing their deceased loved one — on the altar.

Dolan will be assisted by Deacon Bill Adsit, director of the diocesan Mental Health Ministry Network.

As a follow-up to the Mass, people will receive details of mental health ministries at parishes or be referred to Survivors of Suicide Loss services.

Dolan has guidance for people assisting loved ones who have experienced death by suicide.

First, refrain from speculating about whether a soul is in heaven or hell.

“That’s not our call,” he said. “There is never a good time to speak of that.”

Second, don’t try to be an armchair psychologist, attempting to diagnose a deceased one’s mental disorder.

“That’s not what people want to hear,” he said. Rather, say that you are praying with them, are there for them or you love them, he suggests.

And don’t “over-spiritualize” the death by suggesting that the person was possessed by a demon or that their death could have been prevented had they attended church, Dolan advises.

Finally, the bishop hopes the workshop and Mass will be a gateway for further dialogue for the survivors. The National Suicide Prevention Lifeline is (800) 273-TALK (8255).