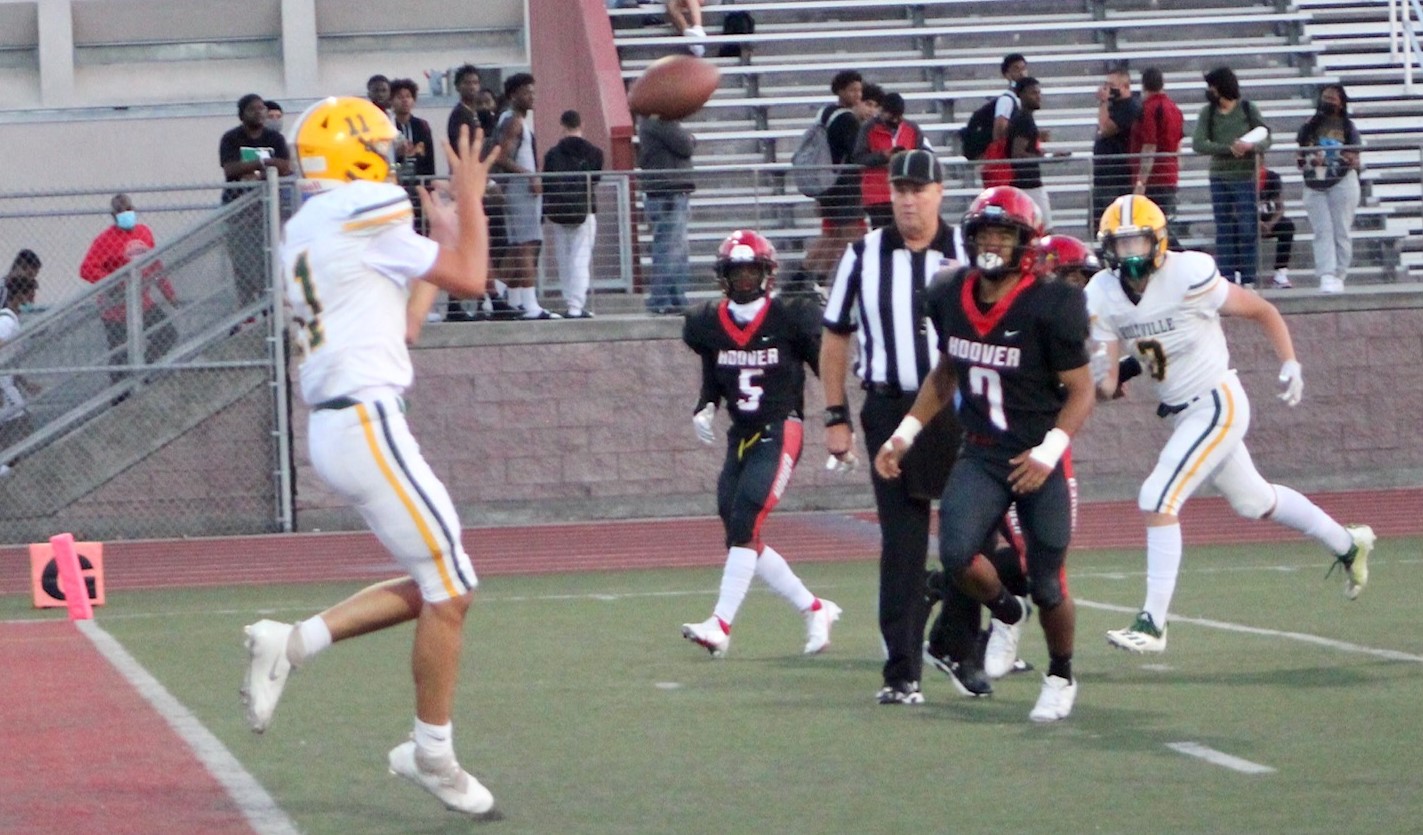 FOOTBALL: Vikings Run Over Hoover on the Road

SAN DIEGO — Three games into the season, the Holtville High School football team is right where it wants to be as the Vikings ran their record to 3-0 with a 44-21 nonleague victory over Hoover High here on Thursday, Sept. 2.

Coming into the season, Holtville head coach Jason Turner knew he wanted to be a dominant running team that could throw the ball when it needed to. He knew he had a revamped offensive line that was going to take time to develop after graduating a big group of seniors in June.

On Thursday, the Vikings (3-0 overall) did exactly what the coach was hoping for, pounding the ball for 348 yards of rushing and five touchdowns on the ground, but also adding in 81 yards through the air and two passing touchdowns.

“We’ve tried to make it real simple for the guys up front and I think they are starting to figure it out,” said Turner, now in his fifth year at the helm of the Vikings. “It’s no secret we want to run the ball and our success depends on them. Tonight they got on their blocks quickly did a great job.”

The recipient of the good offensive line play was senior running back Payton Iten who finished the night with 166 yards on 20 carries and four rushing touchdowns. Younger brother Seth Iten, a sophomore, finished with 104 yards rushing on 14 carries.

“The line was fantastic tonight. We had wide open lanes to run through and they were finishing blocks too and giving us nice cutback lanes,” said the 17-year-old Payton Iten. “After the first quarter we got into a nice rhythm and were able to pound the ball.”

Holtville got great field position to start its first drive of the game after senior Dorian Maize returned a Hoover punt 47 yards to the Cardinals’ 25-yard line. After three straight running plays, senior quarterback Spencer Hilfiker delivered a strike to senior Mason Toten who was wide open in the end zone to put the Vikings up 6-0 with 8:58 left in the first quarter.

“When we run the ball like we did tonight it just makes my job and the passing game so much easier,” said Hilfiker, who finished the night 4-for-4 passing for 81 yards and two touchdowns. “I saw that first touchdown just wide open and was able to get the ball to him.”

Hoover (1-1 overall) would get its only glimmer of hope later in the first quarter when senior Jayden Barnett returned a punt 79 yards for a touchdown. The extra point put the Cardinals up 7-6 with 4:10 left in the opening stanza.

“We knew they had a lot of speed at certain positions and we just didn’t do a good job of containing on that punt,” Turner said. “Our defense was doing a good job so we just needed to be careful with our kicks and keep it away from their speed guys.”

The Vikings closed the first quarter with a nine-play, 75-yard drive that ended with a Payton Iten one-yard touchdown run to put Holtville ahead 12-7 at the end of the quarter.

Two rushing touchdowns in the second quarter opened up the Vikings’ lead to 25-7, with junior Zephan Duarte getting the first one on a 16-yard cutback run and Payton Iten scoring his second of the night on a four-yard blast.

Holtville blew the game open with the opening drive of the second half when the Vikings marched 73 yards in seven plays, all on the ground, finishing with a six-yard run from Payton Iten. He had four carries on the drive for 43 yards with his brother Seth Iten adding a 14-yard run on the drive and junior Daniel Ledesma powering his way for an 18-yard run as well.

Up 32-7, the Vikings got a five-yard score from Payton Iten with 3:06 left in the third quarter to increase their lead to 38-7.

The final score of the game for the Vikings came with 8:29 left when Hilfiker found Toten wide open in the end zone again for a 12-yard touchdown pass. Toten finished the game with three catches for 48 yards and two touchdowns, his second two-touchdown performance of the young season.

Next up for Holtville is its first home game of the season when the Vikings host Maranatha Christian High at 7 p.m. Friday, Sept. 10, in a nonleague contest.