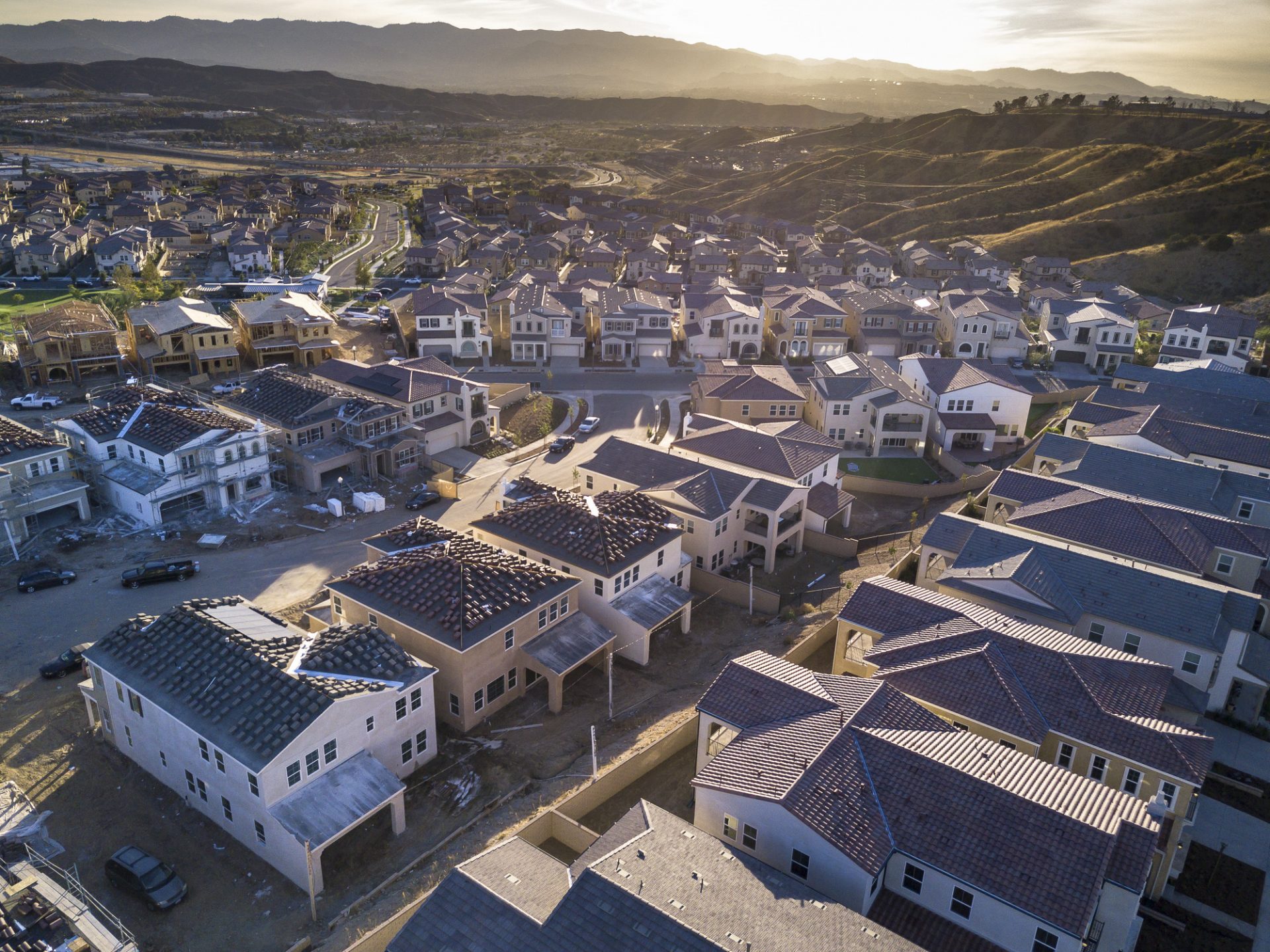 Top down aerial shot of suburban tract housing under construction near Santa Clarita, California, with a vast neighborhood in the distance.
In California

A new UCLA study concludes that California’s system of local housing quotas has a “fundamental flaw” that needs correction.

For more than a half-century, California has been trying to nudge county and city governments into generating enough new housing to handle an ever-increasing demand.

The state’s chief tool has been a legal requirement that local government “general plans” include an adequate “housing element.” Every eight years, the state Department of Housing and Community Development issues regional quotas of housing needs which then are divvied up into specific city-by-city goals for zoning enough land to meet projected needs.

The allocations are very controversial, especially in suburban communities, because they run counter to the not-in-my-backyard sentiments of local residents. As housing production falls chronically short of the state’s goals, the cyclic quotas steadily increase and in recent years the state has added penalties for failure.

Obviously, the quota system hasn’t been working very well and researchers at UCLA’s Lewis Center for Regional Policy Studies have concluded that it has a “fundamental flaw” because vacant land being zoned for housing to meet the quotas is only rarely used for housing. Rather, the housing being built — which is still too little — tends to go on other property, including some previously being used for other purposes.

The study focused on what has happened in the San Francisco Bay Area vis-à-vis the housing quotas issued in the last decade for the eight-year period that will end next year.

“The median Bay Area city is on track to approve housing projects on less than 10% of the sites listed in its housing plan,” the study found. “On average, however, cities are achieving a substantial portion of their (too low) housing targets — nearly 60% for the median city — just not on the sites they had selected and presented to the state as likely or apt for development. Across the Bay Area as whole, nearly 70% of housing built during this period was on sites not listed in housing plans.”

While cities zone specific sites to meet quotas, “housing development occurs in a way that is hard to anticipate. In spite of planners’ efforts to select imminently viable sites, they do not.”

The solution, they say, is to create a more realistic set of requirements that identifies all potential sites for housing, a “change (that) may require cities to include many more sites in their housing plan.”

While a more realistic inventory might require more work — and possibly increase local angst — the UCLA team also proposes that “cities receive preemptive credit for housing they expect to be built on sites not listed in their plan.

“The credit would be tied to production on non-inventory sites during the previous period, giving cities an incentive to accommodate much-needed development when it is proposed, even if they can’t anticipate exactly where or what developers will want to build.”

“The Legislature should stop proliferating ever more detailed requirements for a site to be included in the inventory, and instead require cities to consider every parcel on which residential use is allowed,” the UCLA team suggests. “Since cities aren’t very good at picking the sites where developers want to build, the focus should shift to estimating how much housing is likely to be built during the planning period on the entire stock of residentially zoned land in a city.

This is wonky stuff, but important because of the state’s worsening housing shortage. The proposals would shift the housing quotas from an exercise in paper-shuffling into something more likely to produce real results. But implementing it would require an official admission that the current system isn’t working and a willingness to correct its “fundamental flaw.”

(This commentary first appeared on CalMatters and was written by Dan Walters. It appears as part of the CalMatters Network.)

Previous
Aztecs Roar Back to Dominate in 2nd Half, Beating New Mexico State 28-10 in Season Opener

Next
OPINION: Hispanics Among the Heroes in Kabul Show How Wrong the Nativists Are