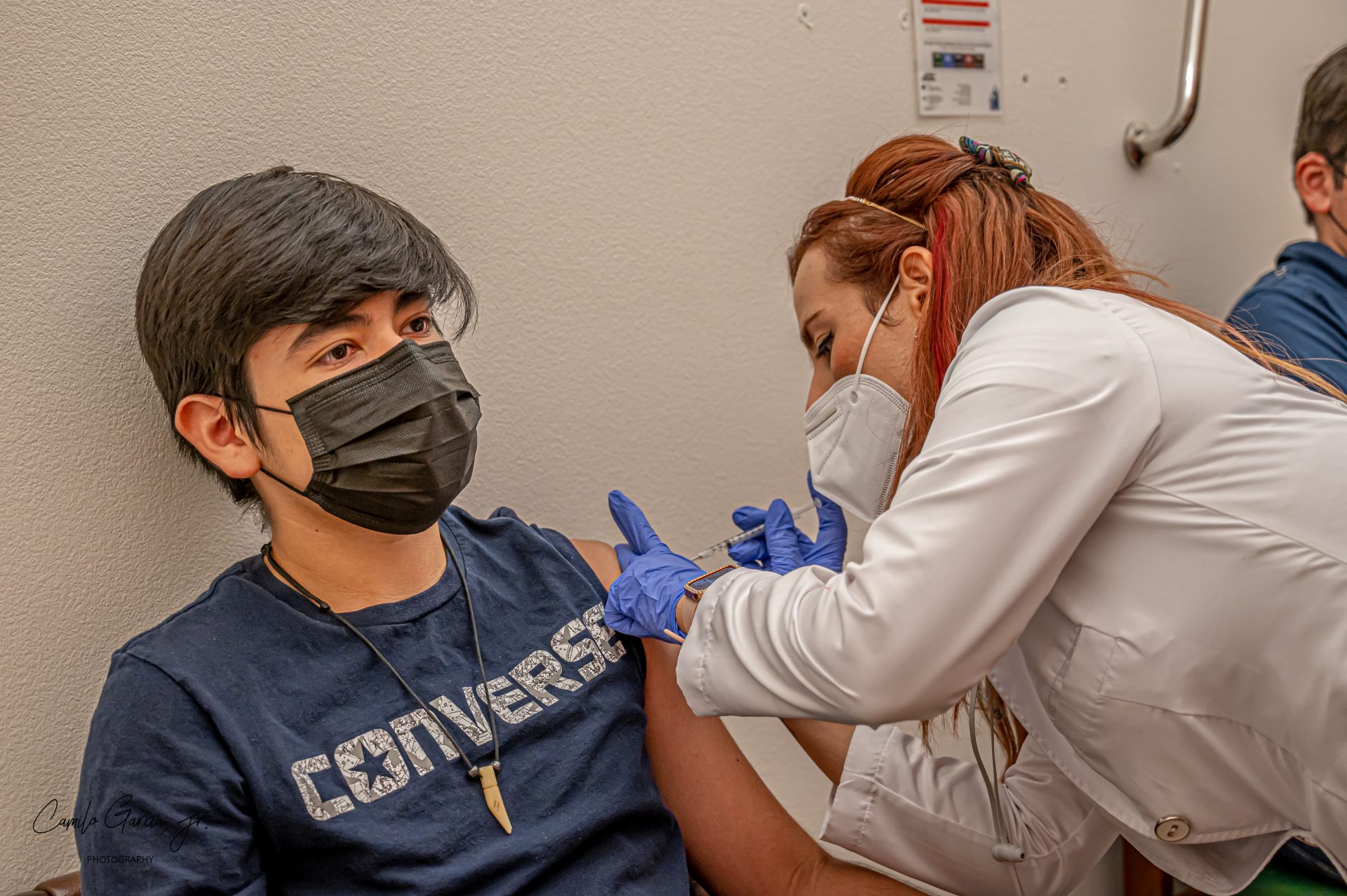 Calexico Wellness Center licensed vocational nurse Chrystian Navarrette Perez, who has a license to practice medicine as a doctor in Mexico, administers the COVID-19 vaccine to a patient recently in the center’s clinic. Calexico Wellness Center recently received a $100,000 grant from the National Association of Latino Elected Appointed Officials Education Fund to vaccinated and education those in the 18-30 age group. | PHOTO COURTESY OF CALEXICO WELLNESS CENTER
Home
COVID-19
Share

CALEXICO — Calexico Wellness Center can now add more weapons to its pandemic-fighting arsenal thanks to a $100,000 outreach grant centered around a campaign called “Juntos Podemos” — “Together, We Can” — focused on promoting vaccination efforts among to the 18- to 30-year-old age group.

The National Association of Latino Elected Appointed Officials Education Fund grant, which is in conjunction with Kaiser Permanente, is the largest donation the Calexico Wellness Center has ever received, said Blanca Morales, the center’s chief executive officer.

“I just want to give them credit for trusting in us to go out there and keep doing what we are doing,” Morales said in a recent interview. “Since we got the money, we are able to get more resources.”

NALEO’s mission is to educate Latinos and increase Latino political participation in the country, according to the website.

The goal of “Juntos Podemos” is to educate and reach out to an age group that has been among the most elusive to vaccinate. This includes countering misinformation, Morales said.

There are nurse practitioners on site that will help deliver these messages, answer patient questions, and administer the vaccine. For example, Morales stressed that it is important for pregnant women to get the vaccine so the immunity can be passed onto their babies. She added that the vaccine does not cause reproductive problems, one of the most believed bits of misinformation on the vaccines.

The targeted age group, which includes “millennials” and the younger “Gen Z,” likely feels invincible and possibly does not realize what a pandemic can be like since they have never witnessed one before in their short lives, said Daniela Flores of Calexico.

“This age group grew up knowing vaccines were there, and we didn’t question it until the last decade when this anti-vax movement grew,” said Flores, who has a master’s in public health nutrition and is a co-founder of the Imperial Valley Equity and Justice Coalition. The coalition has helped to increase vaccination rates locally among high-risk populations like farmworkers.

“I think this generation is a bit removed from seeing the impact these things have,” she said, adding that the poor penetration into this large subgroup is made more troubling by the fact it is out in the workforce and exposed to COVID more.

Efforts to educate people on COVID is important in Imperial County, Flores said, where one in four people live in poverty, one in four have a serious underlying disease such as diabetes, and one in four are obese.

These are all conditions that put a person at greater risk for a worse outcome should they contract COVID, she added.

Calexico Wellness Center’s Morales said that although her clinic just received the grant, the healthcare organization has been pushing public education on COVID vaccines since February, when the vaccine was first rolling out in the Valley.

But the NALEO grant has allowed the clinic’s efforts to ramp up considerably. Morales said she was able to hire full-time, paid staff at the facility, which is normally runs through volunteer hours and donations.

Morales said she recently lost many volunteers due to school starting. Plus, the clinic will also be able to fund gift cards to promote vaccinations, something that done before but with funds paid out of pocket by the center.

“We are now able to hire outreach; now I’ll have a steady team,” Morales said.

Calexico Wellness has been able to administer about 150 doses of vaccine a week, and that was just on Fridays. With the NALEO funds, the center will be open from Mondays to Fridays for education, testing, and vaccinations.

Morales said the center has been getting a lot of vaccine-eligible youths coming in along with adults in their 30s, and even some seniors.

“You can’t argue with science, just like numbers don’t lie. Science is science, and if that’s what the scientists are saying, doing, and it’s been proven people who have gotten vaccinated are all rright,” Morales said.

“The people who are getting COVID right now are the people that have not been vaccinated, at least the people who come to our clinic and get tested,” she added.

Kaiser Permanente out of San Diego is funding this grant campaign through Oct. 31. Kaiser was the company that chose Calexico Wellness Center for the all the volunteer work it has done in the Imperial Valley with the vaccine rollout.

Morales said the center has gone from only having 100 doses a week to at least 1,000 a week. In California, the dose number has shot up to 5 million available.

The center will begin to administer COVID-19 booster shots on Sept. 20, she added.

Calexico holds the distinction of having the highest vaccination rates in what is already a county with some of the top numbers in the state, according to the Imperial County Public Health Department’s online dashboard.

As of Aug. 26, Imperial County had overall partial vaccination rates of 89.9 percent, with 71.9 percent fully vaccinated and 17.4 percent with at least one dose. Morales is certain those numbers will be even higher now that the Pfizer vaccine has been fully approved by the U.S. Food and Drug Administration.