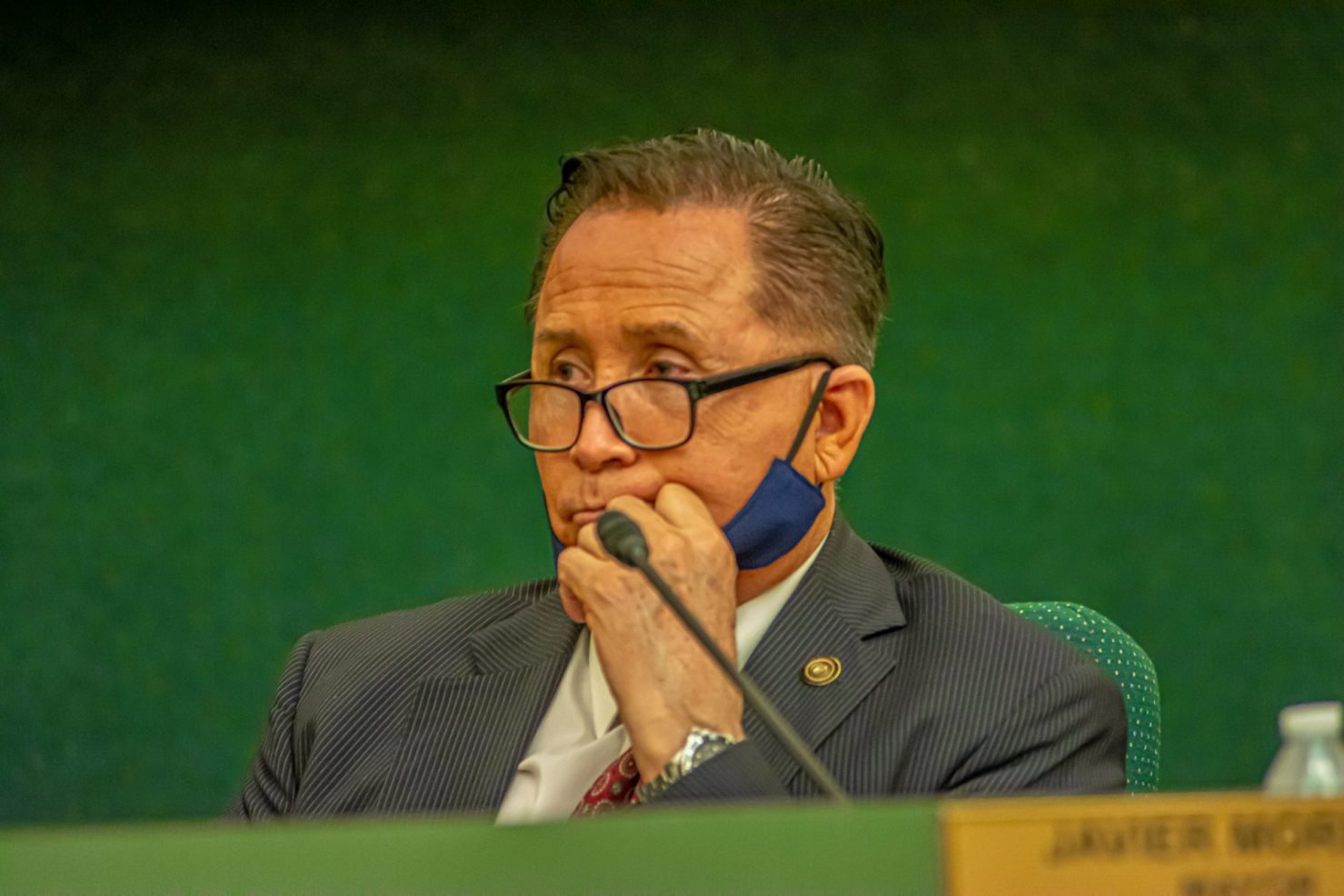 Calexico Mayor Javier Moreno listens during a Calexico City Council meeting in August. Moreno, who often tells people he sets the agenda of the meetings, baffled one fellow council members when he moved to rescind an adopted ordinance to do away with council member benefits and stipends on Sept. 1. The ordinance was reversed by a 3-1 vote. | CAMILO GARCIA JR. PHOTO
Home
Regional News
In Regional News

Code to Do Away with Calexico Council Stipends is Rescinded Amid Legal Challenges, Criticism

CALEXICO — Three months, two threats, and much ado about nothing marked what appeared to be an exercise in futility by Mayor Javier Moreno over doing away with City Council member salaries and benefits.

From the moment the idea received early approval on June 2, to the moment the ordinance was preliminarily reversed and made optional during the Sept. 1 Calexico City Council meeting, the move to remove council members’ benefits contributions and annual stipends — except for a cellphone allowance — was controversial.

Had the issue gone forward as passed during the June 2 first reading and July 21 final approval (the ordinance went into effect 30 days later), the largely ceremonial decision was only due to save the cash-strapped city a total of $154,920.73 over a year between the five council members.

Yet the heat that emanated from certain corners was priceless.

Twice decisions tied to the first ordinance were met with legal threats over Brown Act and procedural violations from council members Raul Ureña and Gloria Romo, and policymakers in cities outside Calexico publicly aired their disapproval of the idea in media reports.

Even those in favor of the spirit of the idea saw it as a little underwhelming; that much could be heard during various comments at ensuing meetings by public safety union officials and others.

Yet Moreno’s about-face on the issue last week even got his former staunch support system, Rosie Arreola Fernandez, who was mayor when the initial ordinance was first decided, shaking her head and openly questioning her former mayor pro tem.

“We had just voted on it, and you were the one that recommended for our benefits to be withdrawn or suspended for the city’s purposes,” Fernandez said in a to-the-point exchange following Moreno’s motion to reinstate City Council compensation and benefits.

“So, could you give us an explanation so that our citizens are aware of the reason why it was put back on the agenda?” she asked.

Moreno answered Fernandez, but the answer seemed like a 180-degree pivot from the hardline he had taken on the issue previously.

The mayor said on Sept 1:

“It’s not so much of an explanation, but a justification. …  we do have some City Council members who wish to retain or some who wish to not retain or not to take it, or not to accept it … so I think it’s best if we are fair enough to allow each of use individually to either accept it or not accept it.”

On July 22, however, Moreno was certain of his decision.

“We’re going through a pandemic, where resources are limited, and I came up with that idea. I talked it over with my cohorts, and by the way, it’s temporary,” Moreno said, taking credit for an idea that did appear to have some genesis with a personal decision to not collect those benefits by City Council member Camilo Garcia.

“It’s just a way to give back to our employees, especially (since) we have a city clerk who’s limited on technology. That money is going to go to that, to revamp the technology, because what happens is, she gets a lot of freedom of information requests,” Moreno said at the time, “and our system is antiquated. This is for technology, for infrastructure for her and her job … So that’s going to benefit the community.”

The $155,000 was to be used to purchase new computer equipment for City Clerk Gabriela Garcia for use in filling California Public Records Act requests, many of which have come from Ureña and Romo, both of whom had indicated they did not want to give up their stipends for reasons due to transparency and the inequality of making representation for the well-heeled.

If the same holds true moving forward and Romo and Ureña do not forego their stipends, the savings to the city from the initial ordinance would be reduced to around $93,000, provided Garcia, Fernandez and Moreno do not collect their salaries and benefits.

The mayor’s “justification” to Fernandez didn’t hold much water, though, by the sound and looks of her reaction Sept. 1.

“Too bad we didn’t have Mr. Garcia here, because he might have wanted to comment on it as well. That’s my concern, you know, we voted on it, and we got a lot of criticisms about it, and the thing is, you were the one that had recommended it, along with Mr. Garcia,” Fernandez said, shaking her head. “And also, I was I was kind of surprised to see this on the agenda again, when it hasn’t even been a month that we voted on it.”

Garcia was absent from the Sept. 1 meeting.

When the question was called to vote, preliminary approval of rescinding the ordinance passed 3-1, with Fernandez holding her ground.

The entire agenda item and decision played out in fewer than five minutes, and Ureña and Romo were dead silent.

Later that evening, when asked whether the decision rendered his second threat of litigation moot, Ureña replied: “More than likely, yes.”

Although the issue is over now, it made for the usual tension between Ureña and Moreno and Fernandez.

After the June 2 first reading, Ureña attempted to pick apart the procedure, editing the council video and posting it to social media in the run-up to a letter he would send the council, city administration and the city’s legal counsel over allegations that Fernandez, Moreno and Garcia had colluded outside a properly agendized public meeting to decide the issue.

Although the city’s lawyers advised council members that there was no violation of the state’s open meetings law, the Ralph M. Brown Act, Ureña tried to find pro bono legal representation until the 11th hour to pursue the issue.

He opted against legal action the first time around on a self-imposed 30-day deadline of July 25 when he could not find representation that would not incur him personal costs in the event the issue had to go to court.

There will be “no lawsuit because it was not financially viable; too much of a gamble with money at the end of the day,” Ureña said at the time.

But Ureña’s legal challenges seemed to find new legs when the final approval on July 21 appeared to violate California Government Code on procedural grounds tied to the way the issue was folded into that evening’s consent agenda.

Moreno did not allow public comment on the issue, after repeated requests by Ureña to pull the item out of the consent agenda (the process to vote on issues in a block) and vote on it separately. Also, members of the public, including a representative of the Calexico Police Officers Association, wanted to speak.

Authoritative sources speaking on background to the Calexico Chronicle reviewed the meeting video and indicated what transpired was not a Brown Act violation but a violation of Government Code 54954.3(a):

The gray area, the source stated, comes with the question as to whether a second reading of a previously approved ordinance is a new layer of approval subject to a separate right to comment, or a continuation of an issue.

However, in interpreting how a consent agenda is used, the League of California Cities’ own “California Municipal Law Handbook 2020” says:

“If the body uses a consent agenda for routine items of business and does not allow members of the public to remove those items from the consent calendar for discussion, then a general audience comment period must precede action on the consent calendar to ensure that the public has an opportunity to comment on any item on the calendar before action is taken.”

These very citations obtained by this newspaper formed the basis of a second letter Ureña sent to the city on Aug. 5 demanding that final approval be vacated in 30 days, or again, he would move forward with possible litigation. That 30-deadline would have been Sunday, Sept. 5.