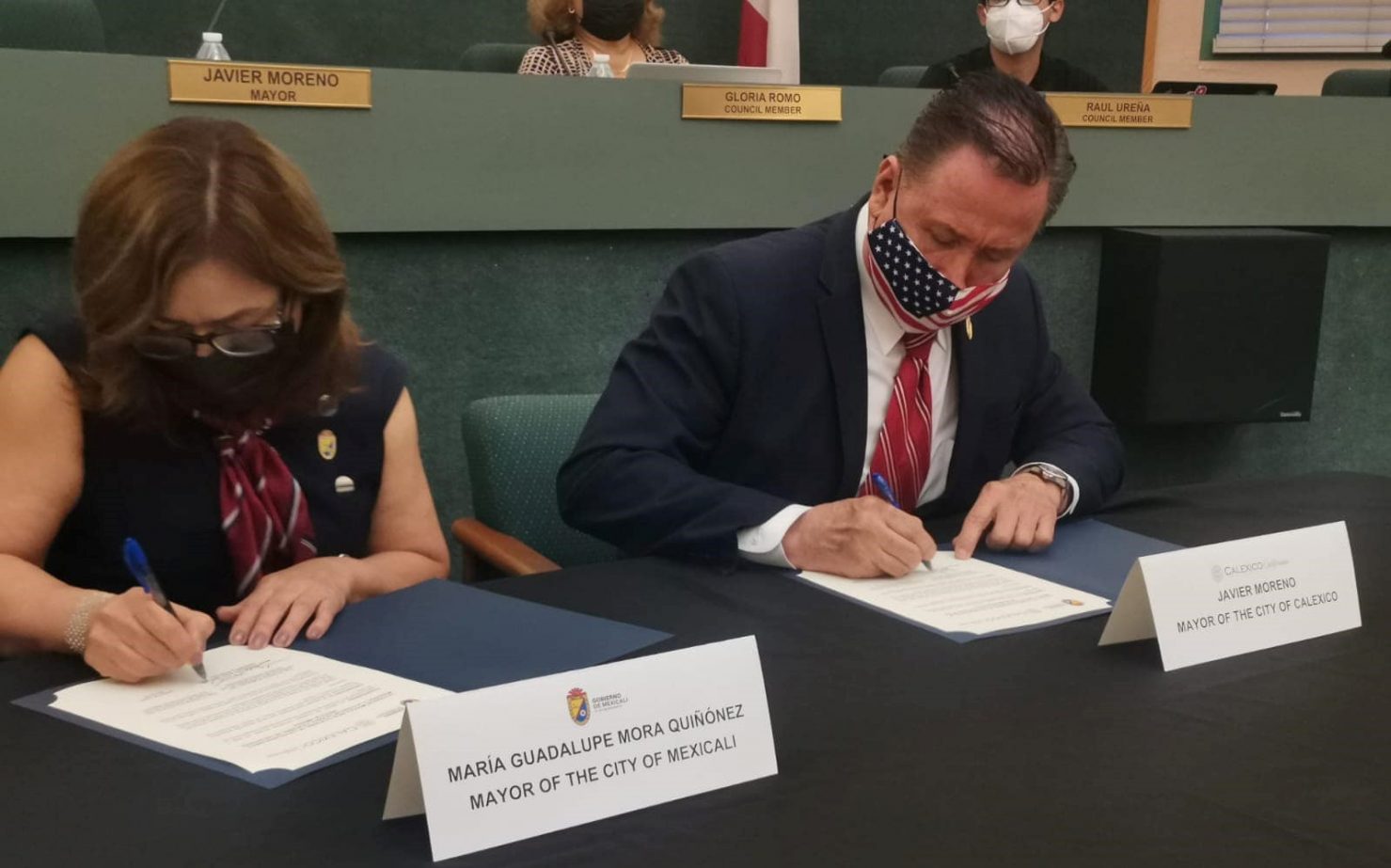 CALEXICO — In what has become boilerplate as regimes change in Calexico and Mexicali, the new mayors of the two neighboring cities “re-signed” and restated their commitment as “sister cities.”

Mexicali Mayor María Guadalupe Mora Quiñonez and her staff was welcomed to Calexico City Hall on Sept. 1 to formally sign a new memorandum of understanding with Calexico Mayor Javier Moreno.

In some ways, both mayors’ rise their respective roles happened under odd circumstances, with Moreno taking up the gavel on July 7 in an uncommon split council vote amid entrenched camps that have appeared to soften over time.

Mora Quiñonez herself was appointed as mayor under some level of protest in March, when then-Mayor Marina del Pilar Ávila Olmeda took a leave of absence from office to run for governor of Baja California, which she won in June. The approval of Mora Quiñonez’s appointment by the Baja California Legislature was not unanimous.

“As we all know, Calexico’s relations with its sister city of Mexicali are as important and complex as with any country in the world. Our relations with Mexicali have a direct impact on the lives and livelihoods of Americans. Whatever the issue is, trade, economics, migration, the environment, and now the pandemic, as sister cities, we are partners to a broad and expanding relationship,” Moreno said.

In an attempt to emulate the processes in place with the City Council and the setting of its meetings and agendas, the council preliminarily approved an ordinance establishing some sense of order on how the commissions operate.

There are presently nine board and commissions in the city of Calexico from the high-profile Planning Commission to lesser-known boards like the Library Board or Trustees or the wide-ranging Parks, Recreation, Beautification, and Senior Services Commission (that’s a mouthful).

Before calling the vote, Mayor Moreno acknowledge that he and the members of the current council have gone through some growing pains in understanding their roles in governance. He added he was pleased to see something in place that better trains the commission members.

The council approved the first reading of the ordinance 4-0. Mayor Pro Tem Garcia was absent from the meeting.

The ordinance spells out a “universal” prescription for all commissions. Highlights include:

At the start of the meeting, Figueroa got approval to place an emergency item of the Sept. 1 agenda that was also meant to circumvent what could have become a bidding process to so the city could quickly fix a sewer system problem.

The day before the meeting, on Aug. 31, as the city was working on the sewer system at the intersection of Imperial Avenue and Sixth Street, a badly corroded sewer “manhole” was discovered by work crews that required immediate attention and closure of the street.

The city is prepping for sewer line replacements in the area.

“We fear that if this manhole is not repaired, we could have substantial damage to the street, which would then cause significant trouble to the transient, very highly used artery in our city,” Figueroa said. No price tag was placed on the fix. The council approved the action, 4-0.

Library Manager Lizeth Legaspi, who earlier in the meeting had been part of a city-issued proclamation of national Library Card Sign-Up Month, explained some of the work accomplished with the funds.

“We provide adult tutoring services for those 16 years of age and older that are not currently attending school. … we recruit volunteers to become tutors, and they meet on a one-on-one basis, and they set some goals,” Legaspi explained.

Legaspi added she was awarded an additional $10,000 for family-oriented special programming to do more of the type of story time events and author meetings the library does now.