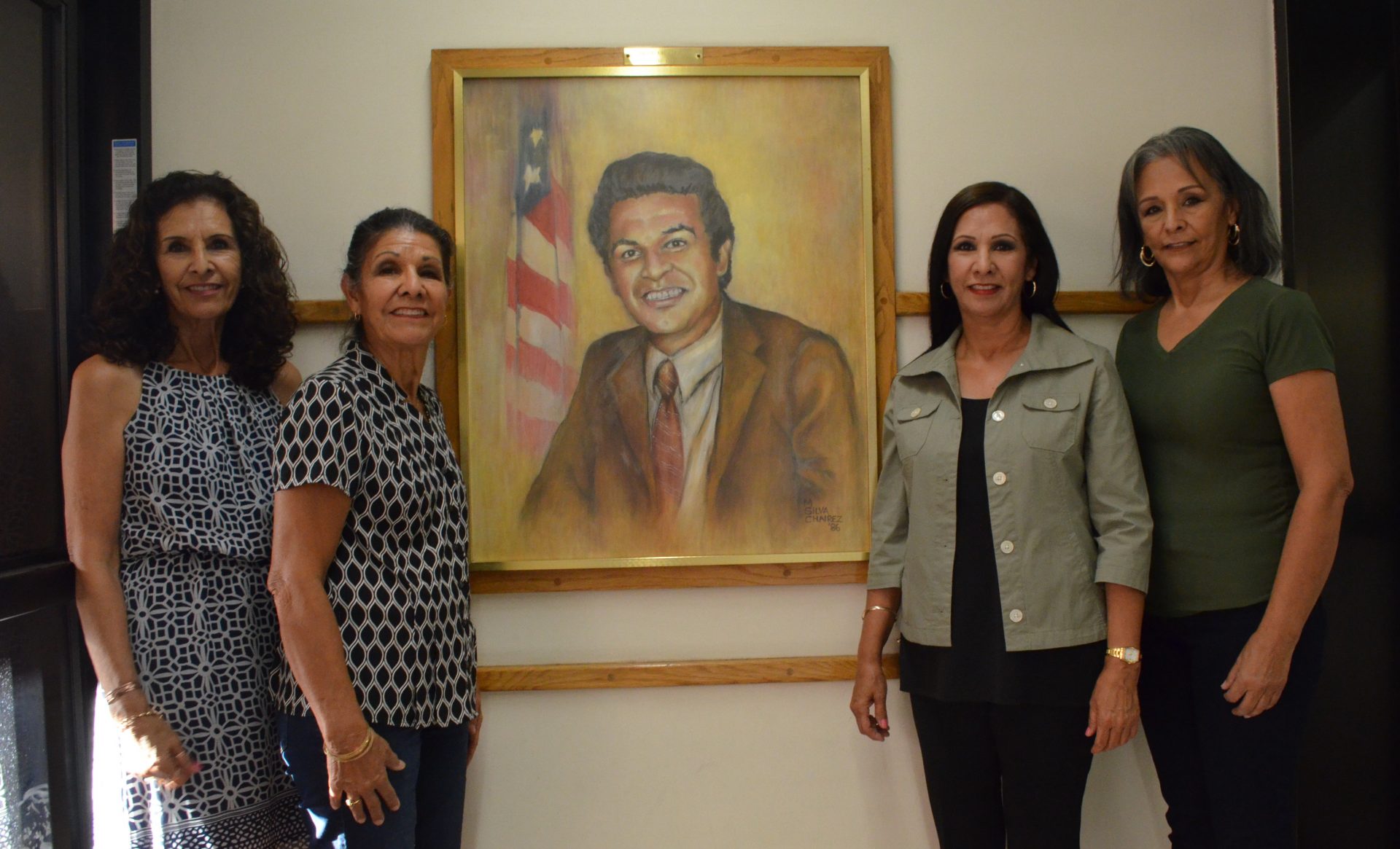 The daughters of Dora Camarena Soto, from left, Myrna Camarena, Bertha Tamayo, Diana Lucero, and Sandra Camarena, pose next to a picture of their slain brother and U.S. Drug Enforcement Administration Agent Enrique “Kiki” Camarena at the Camarena Memorial Library on Sept. 2 in Calexico. | JULIO MORALES PHOTO
In ObituariesRegional News

CALEXICO — In the eyes of her children, Dora Camarena Soto was a lot of things. The longtime Calexico resident was an equally loving and strict mother, a self-taught tap dancer and resourceful seamstress, as well as a talented writer.

The latter designation had been apparent throughout Camarena Soto’s life but became more evident following her death on Aug. 30, at the age of 97 at a nursing facility in San Diego.

Since then, her eldest daughter, Bertha Tamayo, has had the opportunity to go through her late mother’s belongings and has been touched by the candor and vulnerability contained in her writing.

“She used to love to write poetry,” Tamayo said during an interview on Sept. 2. “I think if she would have gone on to college, she would have really become somebody.”

Instead, Camarena Soto devoted herself to her family and in the process became one of the city’s better-known matriarchs. Indeed, half of her surname is enshrined in multiple local facilities, in honor of her son and slain U.S. Drug Enforcement Administration Agent Enrique “Kiki” Camarena.

Camarena Soto was born in Hermosillo, Sonora, Mexico, and had moved with her family to Mexicali when she was just 7 days old. There she met her first husband, Daniel Camarena, with whom she migrated to the United States in 1956 and settled in Calexico, where they raised their nine children.

Providing for such a large brood proved challenging for the elder Camarenas. Yet it also provided opportunities for Camarena Soto to continuously push for her children to better their lives through education and work.

Today, her six living children, all daughters, enjoy professional careers in the public sector and are employed with various federal and state agencies throughout the state and region.

“It was with her help and with her strength,” said daughter Myrna Camarena, of La Mesa. “She was a very strong woman.”

That strength and resiliency were also evident in the numerous Red Ribbon Week presentations that Camarena Soto participated in following the death of her son, Kiki Camarena, in 1985.

Following Kiki Camarena’s disappearance and death at the hands of Mexican drug traffickers, family and friends had taken to wearing red satin badges in his honor. Soon afterward, the red badges became the symbol of the Red Ribbon anti-drug campaign, the campaign’s website stated.

Traveling throughout the United States to take part in Red Ribbon Week events was a highlight for Camarena Soto, who did not have the opportunity to travel much when she was younger.

Accompanying her on those cross-country trips was her daughter, Myrna, who was then and continues to be employed by the DEA. The younger Camarena translated her mother’s Spanish-language Red Ribbon Week presentations to schoolchildren in at least 16 different states.

On one such occasion, Camarena Soto got to meet former President Bill Clinton at a school in Maryland. A photograph of the encounter is one of the many memories that Camarena Soto retained in her scrapbooks.

“She wrote her own presentations,” Myrna Camarena said on Sept. 2 while gathered with her sisters at the Camarena Memorial Library. “She was a go-getter.”

Camarena Soto was also described by her daughters as someone who loved to talk and, consequently, was never shy to speak her mind. Like the time she went to speak to Calexico Unified School District officials about the district’s tendency to enroll her children in various far-flung campuses when they returned belatedly to Calexico after a summer spent following the harvesting of different crops across the state.

“She would go to the school district and demand that we go to the proper school,” said daughter Sandra Camarena, of Yuma.

Those annual summer trips to Winters, near Sacramento, to follow the seasonal crops were a source of joy for the family. Though field work was a common feature of those summers for the whole family, so was visiting the nearby river to fish and play.

“It was very nice because it was like family unity,” daughter Bertha Tamayo, of El Centro, said.

When the children were relatively young, their parents divorced, and it fell to Camarena Soto to singlehandedly raise her nine children. She would later get remarried in 1975 to Servando Soto, who died in 2019 from complications due to a chronic illness.

Camarena Soto’s penchant for speaking her mind also included explicit instructions for her memorial services. She was to be buried in a white coffin, have mariachis perform, and have the hearse bearing her coffin pass by the Camarena family’s home in the 600 block of Third Street.

“She wanted a lavish send off,” said Myrna Camarena.

The Third Street home was Camarena Soto’s “treasure,” where she tended to her garden and trees throughout her life.

When Camarena Soto’s children were younger, their house was always filled with the smell of her handmade tortillas, as well as the sounds of her singing along to her favorite Mexican songs.

Certain songs would often prompt her to hike up the hem of her dress and start tapdancing, a talent whose origins remained something of a mystery to her children.

Similarly, some songs would remind her of her late sons Kiki Camarena and firstborn Eduardo “Lalo” Camarena, who enlisted in the U.S. Army and was deployed in 1965 to Vietnam, where he died of malaria shortly after.

The feelings of loss associated with the unfortunate deaths of two of her three sons appear to have been a common theme in the volumes of writings she left behind. One such volume was a collection of poems dedicated to the memory of her son Lalo and which she often carried with her.

Though Camarena Soto only had a sixth-grade education, she remained passionate about writing throughout her life, buying dictionaries to know the meaning of a word and how to spell it. She even would use napkins at the nursing home where she was residing to jot down her prose whenever the spirit moved her.

Going through some of those writings now, Bertha Tamayo said she is struck by how much her mother mourned for her two sons who died in an untimely and unfortunate manner. It also appears as if writing had provided Camarena Soto an emotional release.

“When she was sad, her escape was writing,” Tamayo said.

Services for Camarena Soto will take place next month, with a viewing scheduled for 6-9 p.m. Oct. 21 at Hems Brothers Mortuary chapel in Calexico, followed by a Mass at 10 a.m. Oct. 22 at Our Lady of Guadalupe Church in Calexico. Burial services will take after the Mass at Mt. View Cemetery, 895 Scaroni Road, Calexico.

A GoFundMe account has also been set up to honor her memory and can be found by searching “Dora Camarena Soto Memorial Fund.”