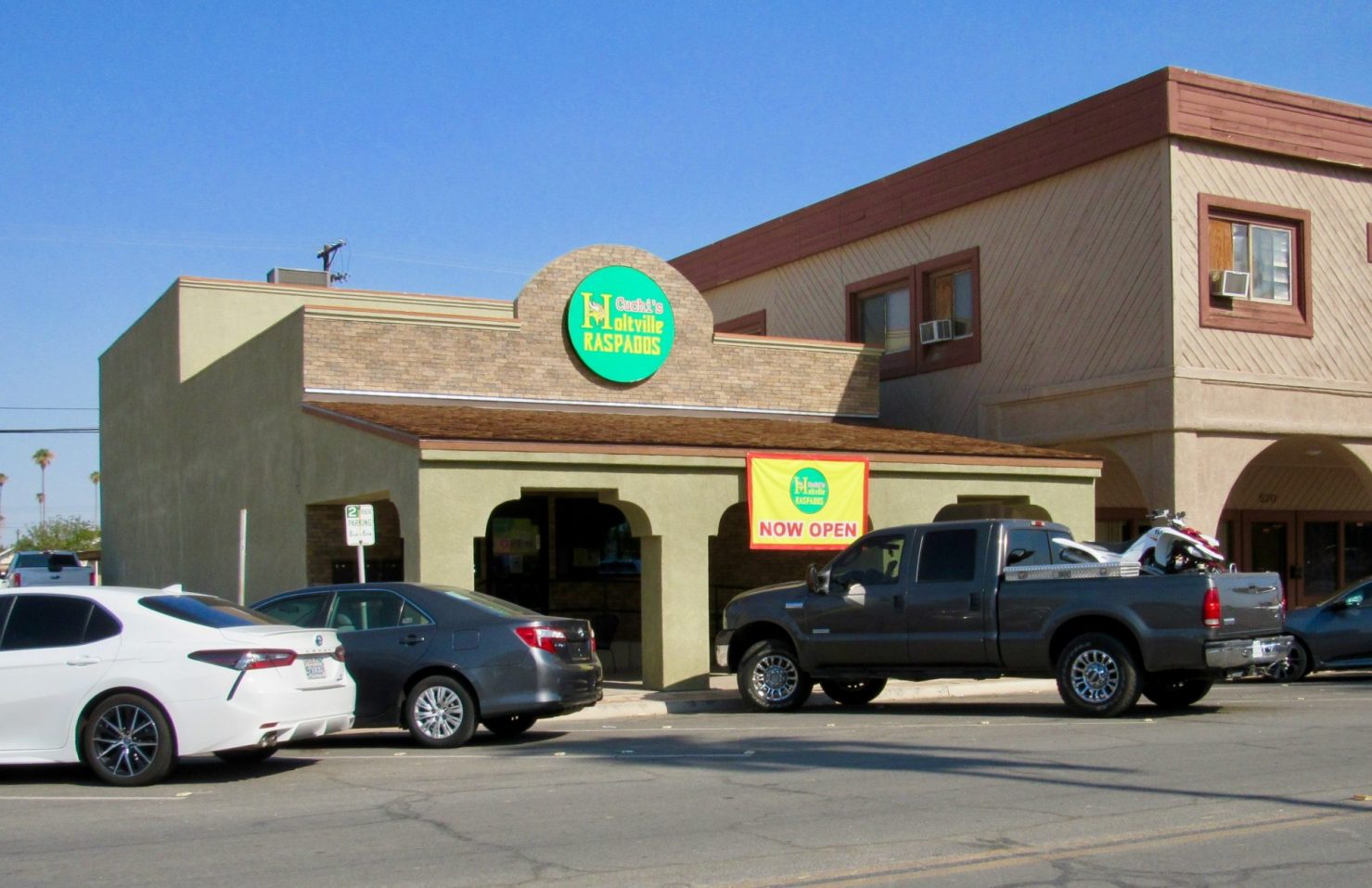 Vehicles park in front of Cuchi's Holtville Raspados on Tuesday, Sept. 7, as the busienss opens its doors at the new location across from Holt Park. | MARCIE LANDEROS PHOTO
Home
Business
In BusinessLocal News

HOLTVILLE — Cuchi’s Holtville Raspados opened its new location directly across the street from Holt Park, a prime location for anyone selling treats, according to an update on construction projects around town.

The new 1,294-square-foot raspado shop at 574 Holt Ave. was open on Tuesday, Sept. 7, with vehicles parked in front, but there were no hours posted and management could not be reached for comment.

“The Sun Community Bank building on Fifth and Holt is moving along and taking shape. Staff continues to work with SCFCU, their design team and the building contractor (Castillo Construction) on finish details as it gets closer to completion, which is expected in the next few months,” wrote Holtville City Manager Nick Wells on Sept. 7 in an email on construction projects around town.

The city’s Planning Commission had approved the design review application for the office on Oct. 5, 2020, detailing plans for the new credit union to be a single-story building of 1,609 square feet. It is intended to have a drive-through ATM, 10 parking spaces, and a retention basin.

The credit union’s Holtville branch, which is currently located at 439 E. Fifth St, is still open during its normal business hours.

Down the street, Fern Crossing apartment complex, between Holt and Fern avenues, has begun to have residents move in, according to Wells.

“The Fern Crossing Apartments on Fourth Street between Holt and Fern are substantially complete, and residents have been moving into the complex,” he wrote.

The three three-story complex has 44 housing units and was initially approved by the city in mid-2018. It has 1,618 square feet of ground-floor commercial space but stirred up controversy when its developer was awarded state subsidies to convert the mixed-space development into farmworker housing so they could offset construction costs. This did not sit well with city officials, who wanted the apartments to market-rate housing to help with Holtville’s housing shortage, according to past reports.

“A city project to add sidewalk to the east side of Cedar Avenue between Fourth and Fifth Streets will start soon. The contractor is doing preliminary work now,” Wells stated.

This sidewalk project was awarded to Rove Engineering Inc. on July 12, having been the lowest bidder at $298,832, beating out LC Paving & Sealing Inc. and Universal Construction and Engineering.

The city received $193,000 from the state Congestion Mitigation and Air Quality program and $60,000 from the State-Local Partnership Program to help mitigate the cost to the city for the improvement.

In order to qualify for the funds, the city was required to put up $85,000 in matching funds, which will come out of the City’s Measure D/Local Transportation Authority account which redirects local retail sales tax to be used for transportation projects, like the new sidewalk.

The project will improve the east side of Cedar Avenue between Fourth and Fifth streets by constructing a new curb, gutter, and sidewalk. While the west side of the street does have a sidewalk, the east side does not.