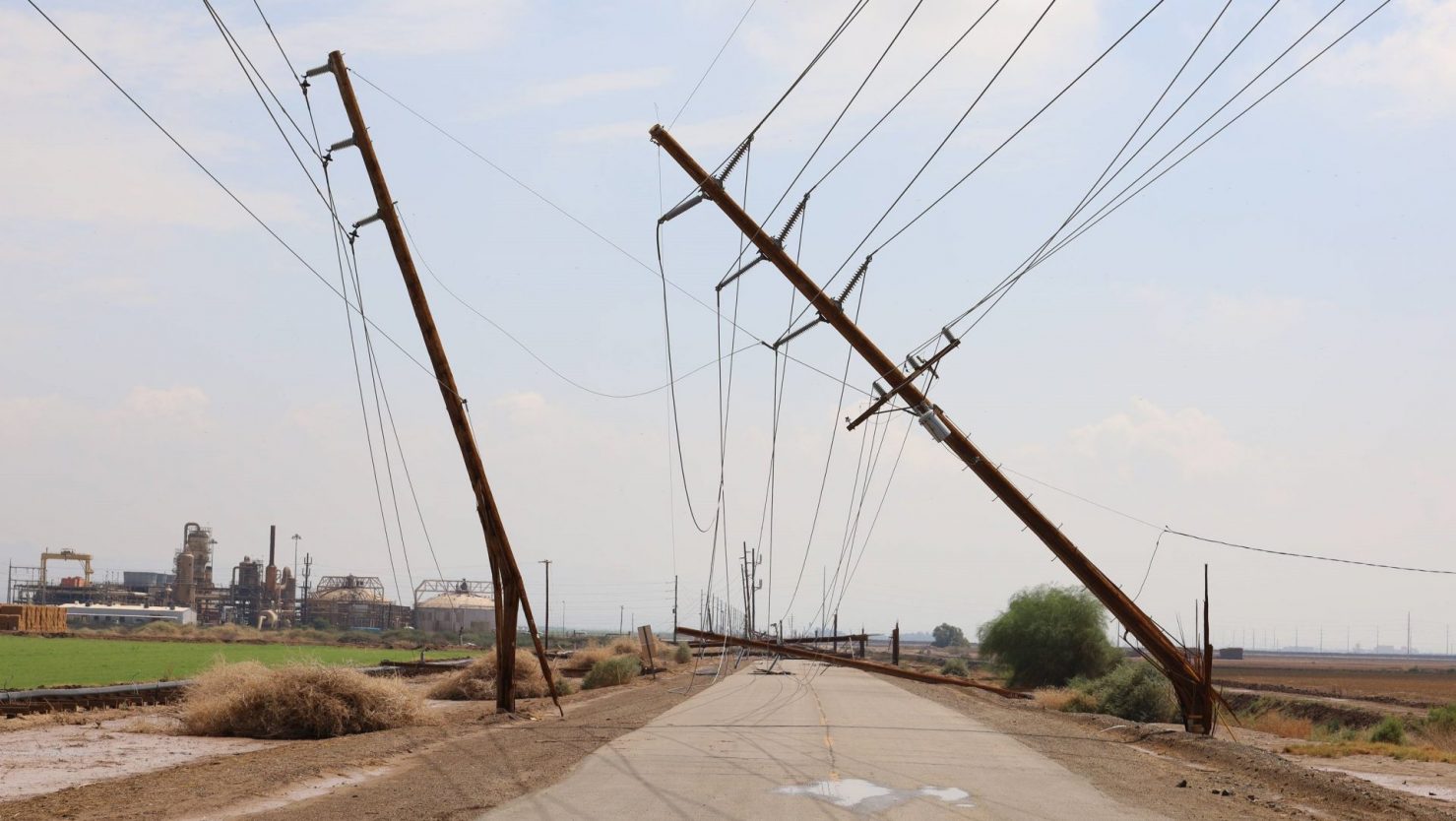 Down power lines and sheared power poles on Sinclair Road leading to geothermal plants near Niland are shown on Sept. 1. The Imperial Irrigation District issued its second emergency declaration of the week, this time stemming from the storm on Aug. 31, that downed power poles and lines all over Imperial County. | PHOTO COURTESY OF IMPERIAL IRRIGATION DISTRICT
Home
Regional News
In Regional News

The toll of recent storm damage on the Imperial Irrigation District system in both the Imperial and Coachella valleys was major, but so was the toll on its budget, with an estimated cost to be “north of $8 million.”

Two storms hit within 24 hours, taking down power and transmission lines throughout the region. The first storm hit about 7 p.m. Aug. 30, followed by another storm with high winds around 4 p.m. Aug. 31. The first outage impacted the North Shore area in the Coachella Valley near the Salton Sea, while the second outage affected the Imperial Valley, most significantly the Calipatria area.

The district declared two emergencies for the storms last week. The district requested mutual aid from other utilities throughout the region and brought in private crews working in the area as well, she said. Crews from Arizona Public Service, Burbank Water & Power, Nevada Power, San Diego Gas & Electric and Southern California Edison assisted in restoration efforts.

“This particular outage (the second in the Imperial Valley) eliminated generation from 10 geothermal plants totaling around 600-plus megawatts,” IID General Manager Henry Martinez said on Tuesday. “All in all, a good effort by everybody. We brought the crews in as far as Las Vegas, Nevada … It was a big effort from everybody working 24/7.”

Imperial Irrigation District crews, with assistance from additional support crews and mutual aid partners, continue working to repair the more than 125 transmission and distribution power poles and lines near Calipatria that were toppled.

“I am pleased to report we have restored the transmission lines that serve four of CalEnergy’s geothermal power plants and we will continue working tirelessly to ensure all remaining lines are energized as quickly as possible,” del Bosque Gilbert said in a news release Thursday, Sept. 9. “I want to thank our entire personnel, contract crews and mutual aid partners that are on-site assisting with the continued infrastructure repair efforts.”

Although residential customers experienced only a short interruption in their service, about 23 commercial customers remain without service. They include the majority of CalEnergy’s geothermal power plants near the Salton Sea as well as some telecommunications providers and farming companies.

While the district hopes to have financial accounting of the events by the end of the week, both emergencies are expected to cost the district more than $8 million, Belen Valenzuela, IID chief financial officer, said on Sept. 7.

“Right now, I can tell you it’s going to be north of $8 million between both emergencies at this point,” she said. “We’ll probably have a better grasp of that this week.”

More than 130 power poles were down — many sheared or split at the base — between the two weather events.

One of the major hurdles with the restoration was a lack of locating the correctly sized poles to fix the transmission lines, del Bosque Gilbert said during one of the special meetings last week.

Of the effort to restore service after Aug. 31, IID officials said efforts were hampered by dark roads that were washed out and there was rough terrain in other areas.

IID had to rely on other power agencies to acquire the wood power poles. Many of the poles in production were headed to the East Coast last week where hurricanes had made landfall.

“The materials needed are being determined and obtaining the appropriate pole sizes is the most challenging part that we will have here,” del Bosque Gilbert said.

(This story was updated on Thursday, Sept. 9, with additional information on the status of restoring power to the geothermal plants.)

Next
Drought Will Imperil Wildlife and People Along the Pacific Flyway