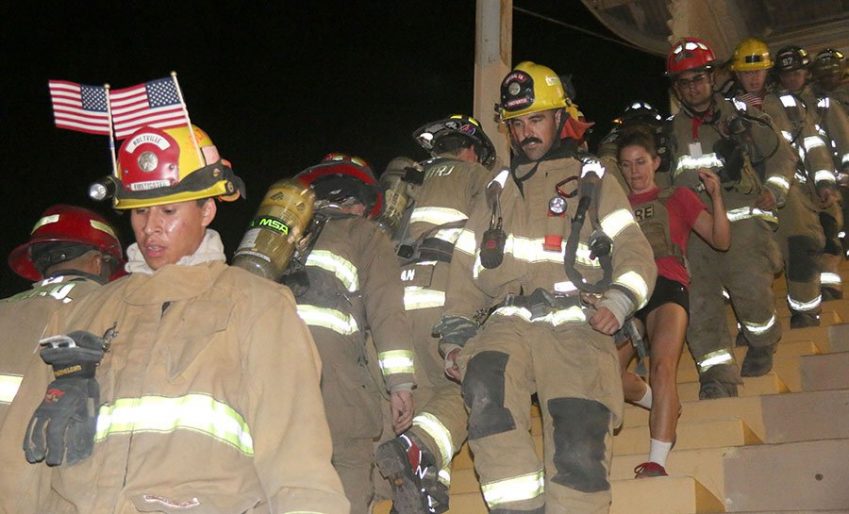 Firefighters from around the region, dressed in their full turnout gear, along with members of the public, take part in the 9/11 Memorial Stair Climb on the steps of the grandstand stage at the Imperial Valley Fairgrounds in 2019. | FILE PHOTO
Home
Regional News
In Regional News

Imperial Valley College will hold an event at 8:46 a.m. Friday, Sept. 10, near the college’s main entrance to remember the lives lost during a 20th anniversary commemoration.

The start time coincides with the moment the first plane hit the North Tower of the World Trade Center complex in Lower Manhattan.

The college asks those attending to please arrive at 8:15 a.m. The event is being sponsored by Associated Students Government.

El Centro Regional Medical Center will stage a remembrance ceremony for the victims of 9/11 and to honor first responders from 10 a.m. to 10:30 a.m. Friday, Sept. 10, in the hospital’s lobby area near the main entrance.

An invocation and moment of silence, guest speakers and a ceremonial flag raising will be part of the event.

Naval Air Facility El Centro will stream a video message from the base’s commanding officer at 6:37 a.m. Saturday, Sept. 11, to commemorate the events of 9/11 but also to pay tribute to the U.S. Navy sailors killed in the attack on the Pentagon in Washington, D.C.

A scrolling list of the names of those sailors will play at the end of the message. The start time coincides with the moment terrorists crashed a hijacked jetliner into the Pentagon, which was 9:37 a.m. Eastern time.

A memorial Mass for those who died in 9/11 will be said at 7 a.m. Saturday morning, Sept. 11, in Our Lady of Guadalupe Catholic Church in Calexico, according to Calexico Police Chief Gonzalo Gerardo. The Knights of Columbus Council 4000 is inviting the public, according Gerardo.

Imperial Valley Fairgrounds will host the eighth annual 9/11 Memorial Event and Stair Climb to honor the 20th anniversary of the 9/11 terrorist attacks on Saturday, Sept. 11.

This event will start at 6:30 p.m. Saturday in their grandstand area, where participants will travel up and down the concrete grandstand steps to represent the of the 110 stories of the World Trade Center.

All proceeds will go to the National Fallen Firefighters Foundation and the FDNY Counseling Services Unit.

On this 20th anniversary of 9/11, the Cannaffornia cannabis complex is marking its grand-opening event with a 9/11 anniversary commemoration at the Imperial Center site east of Heber at Highway 111 and Heber Road.

A flag-raising ceremony will be at 11 a.m. to honor those lost in the 9/11 attacks. Imperial County Fire Department’s Heber substation is reportedly to be in attendance, according to a Cannaffornia press release.

A portion of the day’s proceeds will be donated to a San Diego based nonprofit, the Battle Brothers Foundation, to help fund research on the use of cannabis for post-traumatic stress disorder. This event is located at Queen of Dragons, at 1147 Yourman Road, Heber.

(EDITOR’S NOTE: If you’ve got a local 9/11 event you’d like to see here, email us at rbrown@calexicochronicle.com and we can add it to the list.)