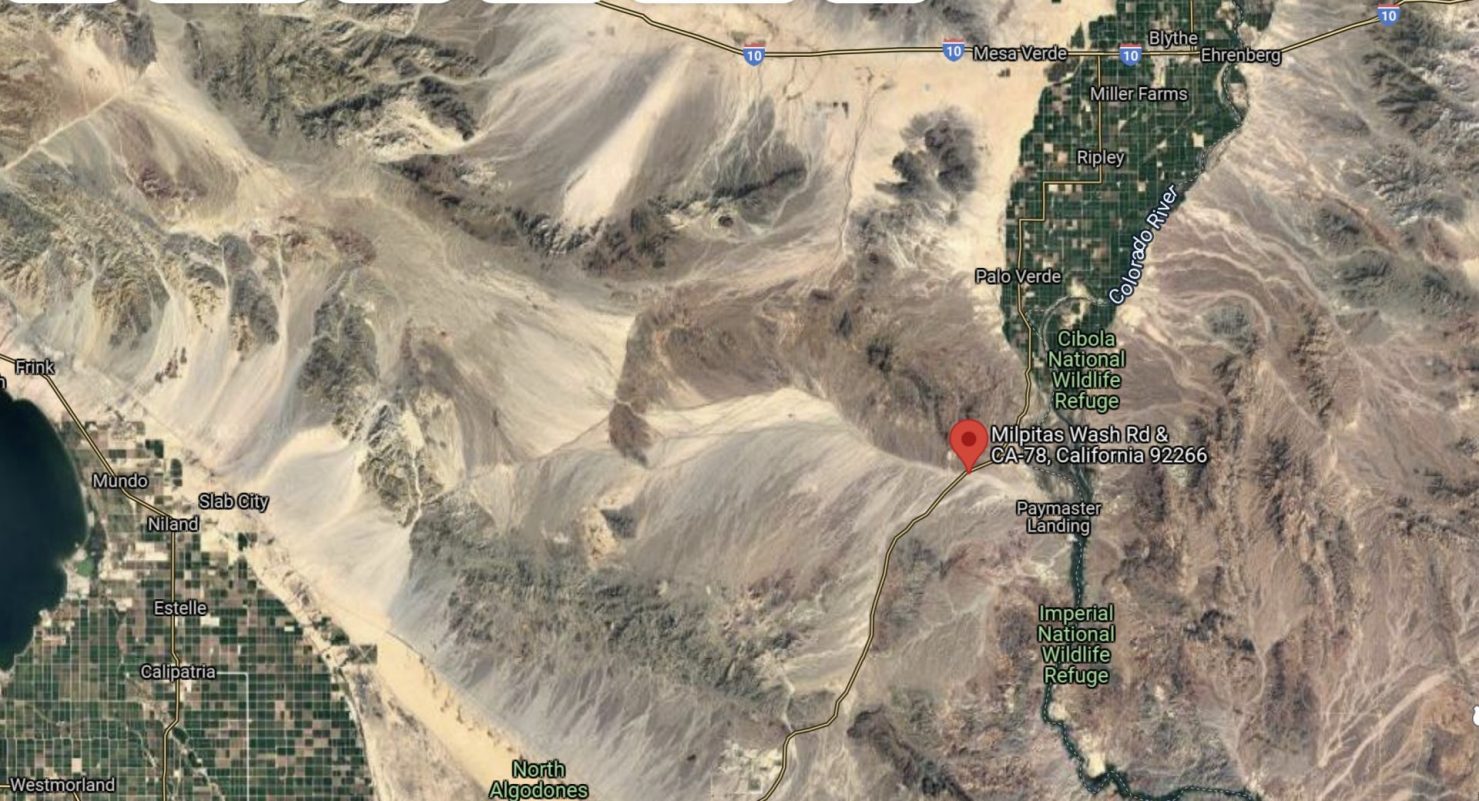 Two bodies have been recovered that were in a vehicle washed away by storm waters on Aug. 31 in the Milpitas Wash area of Highway 78 (red pin) in the Palo Verde Valley in northeast Imperial County. The second body was found Monday, Sept. 6, and coroner’s officials have yet to make a positive identification on either individual. | GOOGLE MAP
Home
Public Safety
In Public Safety

UPDATED POST (Friday, Sept. 10): EL CENTRO — A rapid DNA test is being performed on the body of a woman that was found Monday, Sept. 6, in the hopes of determining whether it is the missing occupant of a vehicle that was washed away by storm waters on Aug. 31 near Palo Verde.

The Imperial County Sheriff’s Office also disclosed the identity of a male whose body was found Sept. 1 after authorities launched a search-and-rescue effort in response to the report of a vehicle and its two occupants being washed away by storm waters where Highway 78 crosses Milpitas Wash.

Jack Andrew Wood, 61, of Blythe was traveling with his girlfriend on Highway 78 when the vehicle they were in was pushed into Milpitas Wash by the strong current of water traversing over the roadway, the Sheriff’s Office reported on Friday, Sept. 10.

Though the body of a woman had been found in the vicinity of the incident, the county Sheriff’s Office has not been able to identify her or determine whether it is Wood’s girlfriend, a Sheriff’s Office press release stated. At the request of family, the woman’s identity, if confirmed, will not be released, according to the Sheriff’s Office.

The vehicle the pair was traveling in has been located.

The National Weather Service reported that the recent storm had dropped about six inches of rain in the area of Highway 78 and the Colorado River in far northeastern Imperial County near the Arizona border.

ORIGINAL POST (Tuesday, Sept. 7): PALO VERDE — The bodies of the two occupants of a vehicle that was washed away at Milpitas Wash on Highway 78 during the Aug. 31 storm were separately recovered by search-and-rescue teams.

The second of the two bodies was located about two and a half miles east of the highway in Milpitas Wash on Monday, Sept. 6, the county Sheriff’s Office reported.

The coroner’s division was expected to use DNA technology to help identify the body on Tuesday, Sept. 7, and notify next of kin, Chief Deputy Robert Benavidez said.

No further information about the body found on Monday, or the first body to be recovered, was immediately available from Benavidez or the coroner’s division.

The recovery of both bodies resulted from a multi-agency search-and-rescue effort that got underway the night of Aug. 31 after the storm had subsided, Benavidez previously stated. The vehicle that the unidentified pair were traveling in was reported to have been washed away by fast-moving stormwaters about 3 p.m. that day.

The National Weather Service reported that the recent storm had dropped about six inches of rain in the area of Highway 78 and the Colorado River in far northeastern Imperial County near the Arizona border.

Construction crews will provide one-way traffic control on Highway 78 between Stallard Road and County Road southwest of Palo Verde in northeastern Imperial County indefinitely, according to the state Department of Transportation.

The work is part of storm damage repairs to pavement and shoulders caused by flash floods washing away infrastructure on Aug. 31. There currently is no date for full reopening of the roadway, according to a Caltrans press release.

(This story was updated at 7 p.m. Friday, Sept. 10, with information on area road closures from the California Department of Transportation.)