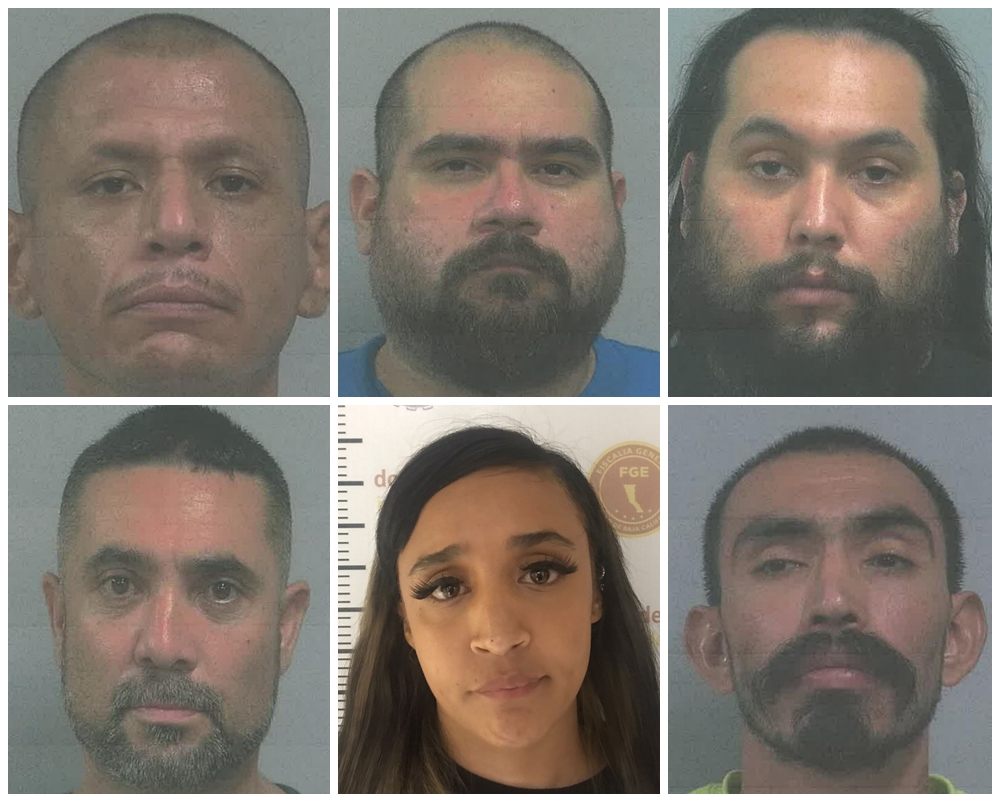 Four Suspects Were Jailed on Eight Felony Counts, One on Two Felonies

CALEXICO — Five suspects alleged to have intimidated and assaulted witnesses tied to a July 4 murder case in Calexico were scheduled to be arraigned in the Brawley Superior Court on Friday afternoon, Sept. 10, following their coordinated arrests in a series of high-risk tactical raids on five separate locations in the Imperial Valley.

Four the five suspects were apprehended in the execution of search warrants at 7 a.m. Thursday, Sept. 9, in locations in Calexico and Brawley, Calexico Police Chief Gonzalo Gerardo said.

A fifth suspect, who evaded police that morning and considered armed and dangerous, 31-year-old Michael Derrick Jimenez of Calexico, turned himself in to the Imperial County Sheriff’s Office jail staff after 5 p.m. Thursday, Gerardo said later that night.

The five taken in the morning were Raul Mejia, 48, Miguel Angel Rodriguez, 31, and Jorge De La Rosa Jr., 41, all taken into custody in Calexico, and Ruben Fuentes, 32, who was taken in Brawley.

Mejia, Rodriguez, Jimenez, and Fuentes were each facing eight felony counts, which includes two counts of conspiring to dissuade a witness, two counts of dissuading a witness by use of force or threat, three counts of false imprisonment, and one count of conspiracy, according to court records.

A sixth suspect in the case, Gilberto Mujica, 35, was already in custody at the time of the coordinated warrant sweep. He was not scheduled to be arraigned.

Federal, state, and local agencies assisted Calexico police in the enforcement action, which led officers to link the subjects to alleged additional crimes like human trafficking, drug smuggling, guns, and “other serious crimes,” according police.

The arrests are tied to the fatal stabbing of 28-year-old Michelle Hernandez Durazo in the early-morning hours of July 4 at a home in the 700 block of Contreras Court.

Homicide suspect Maria Guadalupe Palacios Perez, 22, of Calexico was arrested at a motel in Mexicali some 11 days later by Mexican law enforcement officials in coordination with Calexico police and the U.S. Marshal’s Office.

Palacios has been held in the Imperial County jail since, with her bail set at $1 million.

What happened in the Sept. 10 arraignments were not immediately available. Several of the suspects had $500,000 arrest warrants against them.

The stabbing that ties the cases together occurred just before 3 a.m. on Independence Day, when the victim sustained multiple stab wounds to her legs after a verbal altercation, police said.

Palacios reportedly left the scene in a gray vehicle driven by a male subject believed to reside in El Centro, police said at the time. The suspect was reportedly identified by a resident of the home where the incident took place.

Of the Sept. 9 warrant raids, Chief Gerardo thanked the various agencies that assisted Calexico, and give credit to the work of his officers.

“I want to commend the Calexico police officers’ hard work and tenacious police skills to solve this case. These officers make the department and me look good,” Gerardo stated in a department press release. “They deserve full recognition from the city of Calexico administration and council.”

During a conversation earlier Thursday, Gerardo said the raids were the equivalent to five tactical units, what would have formerly been referred to SWAT teams, descending on the locations. In one case, he said, teams used “flash bang” devices to disorient and take at least one suspect into custody.

Next
Harold D. Carter, ‘A True Public Servant,’ Dies at 78