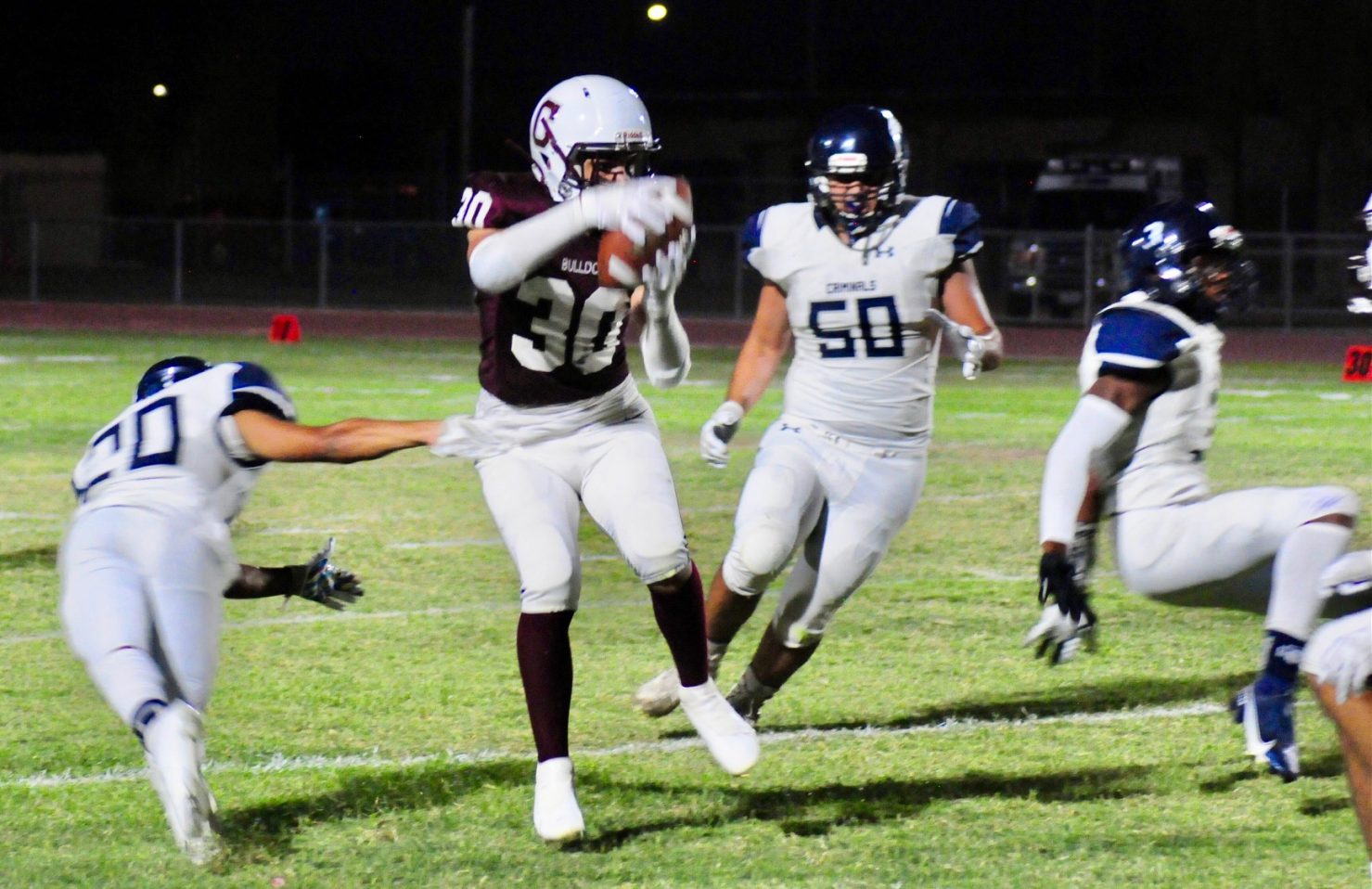 CALEXICO — Despite a handful of turnovers and costly penalties, the Calexico High School football team collected another win, downing visiting Yuma High School, 21-12, at Ward Field here on Friday, Sept. 10.The victory is the Bulldogs’ third in a row and improves their record to 3-1 on the season.

“I’m glad their hard work is paying off,” said second-year Calexico head coach Fernando Solano. “We’re still so far from where we want to be and from our potential.”

Calexico’s potential was on display against Yuma with hard running by junior Zeus Pradis, who scored two touchdowns. His first was an 18-yard rush to the end zone with 49 seconds left in the first quarter. Lorenzo Rodriguez kicked the extra point, going 3-for-3 for the night, to give Calexico a 7-0 lead.

The game was plagued by turnovers from both teams.

In one fumbling sequence, the Bulldogs held the Criminals on fourth-and-1 at the Calexico 8-yard-line. The Bullodgs couldn’t do anything offensively and had to punt, but Yuma fumbled the punt and turned it over to Calexico. The Bulldogs proceeded to fumble on the next play, giving the ball back to Yuma.

“A lot of turnovers, a lot of mistakes,” Solano said. “We should have put the game out (of Yuma’s reach) in the fourth quarter.”

Yuma scored with 8:38 left in the fourth quarter. However, a failed two-point conversion left the Criminals trailing, 7-6.

Calexico senior running back Julian De Leon answered with a 52-yard touchdown run with 7:15 left in the game and Rodriguez’s kick gave the Bulldogs a 14-6 lead.

Calexico’s defense stepped up next, forcing the Criminals to turn over the ball on downs at Yuma’s 24-yard-line.

Calexico capitalized with Pradis’ second score of the game, an 18-yard run to give Calexico a 21-6 lead with 3:28 left to play.

Yuma didn’t go quietly, returning the ensuing kick off 77 yards for a touchdown, but after another missed two-point conversion, the Criminals trailed, 21-12.

Calexico fumbled its ensuing possession, turning the ball over to Yuma at its own 42-yard-line with 2:29 left in the game. However, Calexico junior Andres Ramirez intercepted a Yuma pass attempt with 1:50 left to play.

“We’re working on that,” said Pradis of the team’s turnover issues. “We learn from our mistakes and that’s something we’ll continue to work on.”

“Both victories at home are very important,” Pradis said. “We’ll try to get those wins.”

Next up for the Bulldogs is a trip to face undefeated Holtville (4-0) in a cross-league matchup. Kickoff is slated for 7 p.m. on Friday, Sept. 17, at Birger Field in Holtville.