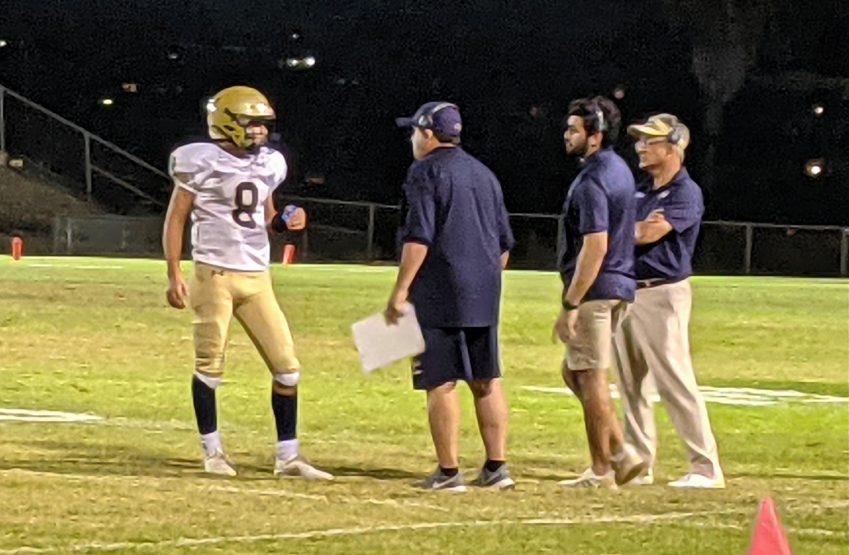 CHULA VISTA — The Vincent Memorial Catholic High football team came into San Diego County a little unsettled when its charter bus arrived late in Calexico to pick up the Scots to bring them to their matchup with Castle Park here on Friday, Sept. 10.

However, once the players and coaches stepped off the bus after the two-hour ride from the desert, it was time to focus on the game.

Turnovers are key in any game and other than giving up the ball on downs, the Scots didn’t throw an interception or fumble the ball to the Trojans. On defense, Vincent Memorial recovered two fumbles and was able to reel in multiple  interceptions.

In addition winning the turnover battle, the Scots (2-2 overall) committed fewer penalties compared to the Trojans (0-4).

The biggest offensive play for Vincent Memorial came in the third quarter when Elias threw an 81-yard touchdown pass junior Armando Apodaca to increase the Scots’ lead to 26-6.

Prior to the touchdown, Castle Park blocked a punt, giving the Trojans the ball at the Scots’ 19-yard line.

The Trojans were unable to move the ball, giving the pigskin right back to the Scots, which led to the Elias-to-Apodaca 81-yard touchdown pass.

“(In) the first quarter the kids were not ready,” Padilla said. “They were asleep, but in the second quarter, second half, they played great. We know what we have as a team. We have a young team, but we have a speedy team, so we came through and won the game.”

The Trojans opened the scoring with a touchdown with 7:29 left in the first quarter. The Scots answered quickly scoring 39 seconds later, a drive that was benefitted by two Trojan penalties for 20 yards, including roughing the passer.

The opening score for the Trojans would be the only points they would be able to muster until late in the fourth quarter.

Padilla said the team has the ability to adjust to the flow the game.

“We start very slow, and we pick it up,” Padilla said. “We have very good players to pick it up and we did great.”

The Scots controlled the second quarter, shutting out the Trojans 14-0 to take a 20-6 halftime lead.

On the flip side, the Trojans were led by senior Jose Jackson, who played quarterback and got minutes on the defensive side of the ball as well.

Padilla said the Trojans’ offense was able to test the Scots’ defense with Jackson leading the team.

“They actually have a pretty good quarterback,” Padilla said. “They lack some receivers, but the quarterback is pretty good. They’re pretty good among the lineman, so they’re a good team. We stopped them with our D-Lineman.”

Next up, the Scots return to San Diego County when they visit Clairemont for a 7 p.m. kickoff on Friday, Sept. 17.

Padilla said the team wants to have the same goals it had this week heading into next Friday, “the same mentality we have right now,” he said.