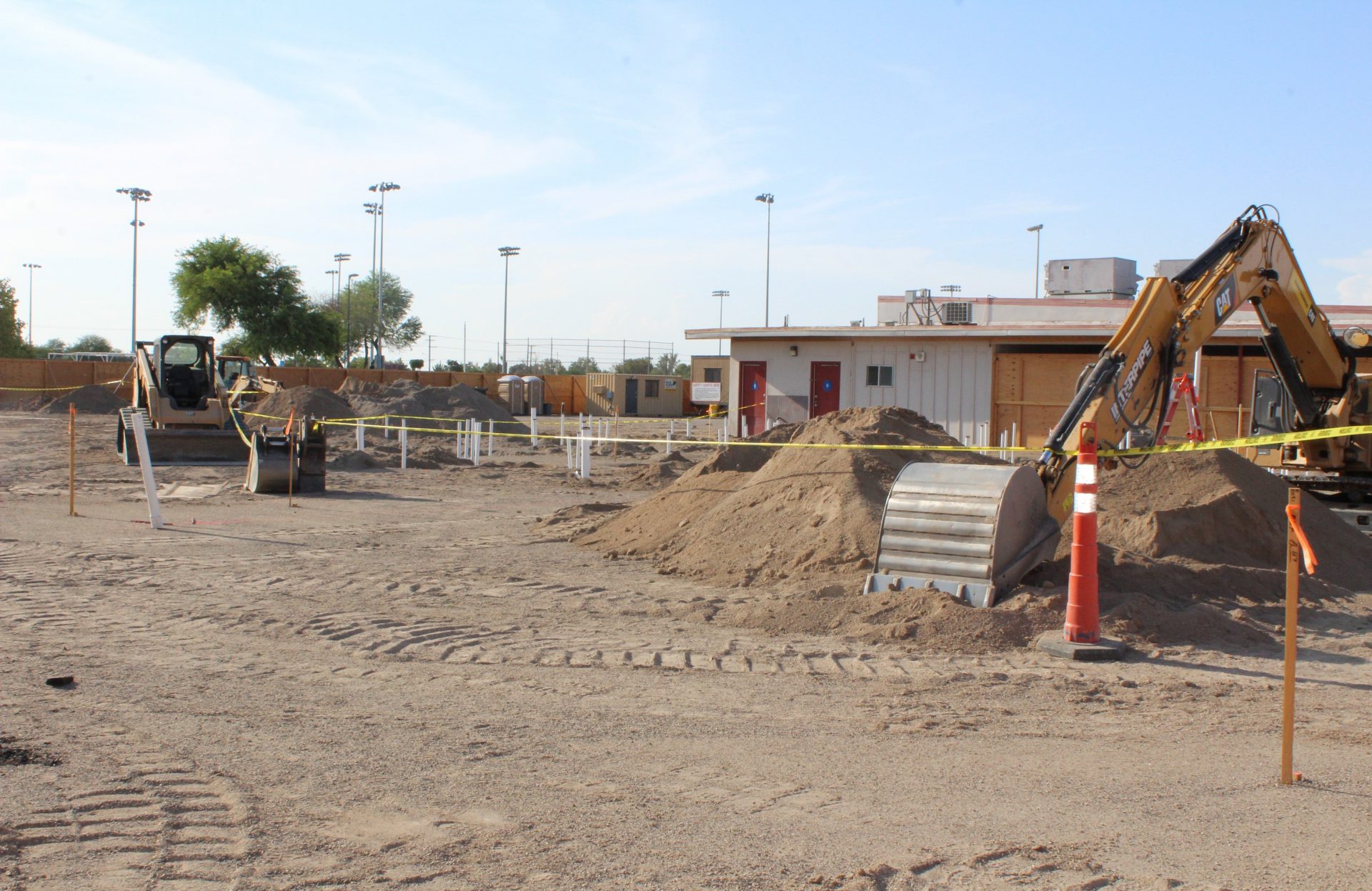 Cramped Quarters to Give Way to Larger Cafeteria, Stage … But Not Until 2022-2023

IMPERIAL — Students at Imperial High School might have seen the white walls going up or heard the sounds of construction as they make their way to class, waiting for when they will have a chance to use the future multipurpose room next year.

David Bojorquez, a senior at Imperial High, has spent his high school career in the school’s small cafeteria. He has seen the walls and had to go around them. Just like most of his class, he is a bit bitter that the new MPR is finishing up as his high school days are ending.

Yet Bojorquez said he’s happy to just see something being done for the school.

“Everybody’s pretty happy. All the sophomores and juniors are excited they are getting a new thing,” Bojorquez said recently.

On Thursday, Sept. 9, the Imperial Unified School District board had an official “groundbreaking” ceremony outside the district office to commemorate the start of construction and future of the new MPR.

The building has 18,064 square feet of space that includes a cafeteria, a state-of-the-art full kitchen and serving line with a snack bar, a culinary classroom and laboratory, and a performance stage.

The assembly area will hold a maximum of 809 persons, seats 440 students for lunch, and 560 persons for seating during presentations. The approximate cost of the project will $15 million.

Imperial High Principal Joe Apodaca said the school, students and staff are excited to see the finished product. He said it will open doors to possibilities that are not possible with the current Imperial High gym and cafeteria.

“We are all really looking forward to using the multipurpose room, the new kitchen, and the culinary arts classes. We’re all really excited,” Apodaca said

This project has been in the works since 2016 through the voter-approved Measure O, a $40 million bond “to improve the quality of education by modernizing/constructing classrooms, restrooms and school facilities; making health and safety improvements; improving access to computers and modern technology; and upgrading/constructing P.E. fields and facilities for school and community use,” according to the information from on the 2016 ballot.

The MPR was just one of two projects proposed at the time, the first being the construction of Cross Elementary School, which was completed in 2019.

The MPR will replace the current cafeteria, which Thomason said, is at “the end of life.”

It was originally a shared cafeteria between Imperial High School and Frank Wright Middle School. That changed once Frank Wright’s new campus was built in 2007, but the High School’s students have continued to use a cramped cafeteria even as Imperial’s population has grown.

When there is no room inside to eat, students often move outside to eat in the elements.

High school events have even had to be held either at Frank Wright or T.L. Waggoner Elementary because they are larger, Thomason said.

The new MPR is projected to be completed in 16 months and hopefully be ready in the early 2022-2023 school year, according to Thomason. Once it is completed, the old cafeteria will be torn down and turned into a service yard.

Apodaca added that like Bojorquez many seniors are upset that they won’t get to experience the new building. However, he has already extended an invitation for them to visit once the MPR is complete and open.

Gina Hendrix is the Imperial High director of administrative and fiscal services, a mother, and former student of Imperial High who used the old cafeteria when she was at school. Her son now is in the culinary program, and she can see this new MPR building opening doors for students.

“It opens doors to a lot more programs, and there are a lot more things that they can do in the program itself,” Hendrix said. “It’s good to see our district is putting in this much because we are still growing.”

The white walls that separate the construction site from the rest of the campus will be up for at least the next school year, giving students a front row seat to the progress.

Next
Imperial Unified: No Masks, ‘Let Them Breathe’