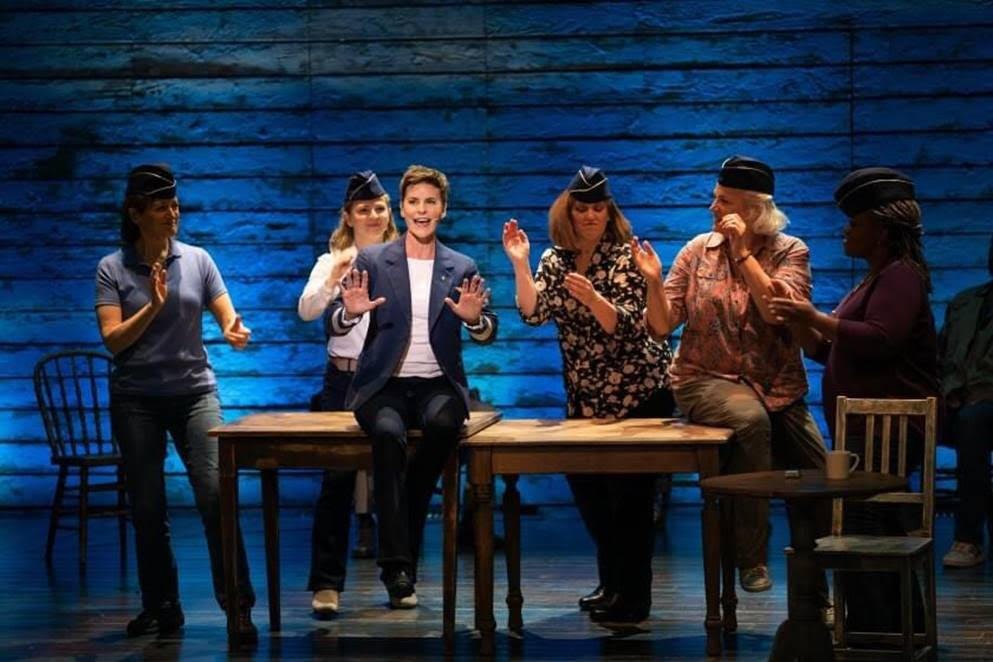 Jenn Colella and the women of “Come From Away, “now streaming on Apple TV+ Courtesy of La Jolla Playhouse
Home
California
In California

There couldn’t be a better week — or month, or year — to watch the film version of the musical “Come From Away” than on this 20th anniversary of the tragedy of 9/11.

The show recounts the real events that occurred in the small town of Gander, in the province of Newfoundland, Canada, when the U.S. airspace was completely closed to all incoming planes. Gander is home to a disproportionately large airport that used to be a refueling stop for transatlantic flights, before jets could make the trip without pause.

On that day in 2001, 38 flights, filled with nearly 7,000 passengers from 95 countries, were re-routed to Gander, effectively doubling the population. What happened over the next five days was nothing short of astonishing.

The Gander residents, rugged islanders who are accustomed to sticking together and taking care of each other, opened their homes and their hearts to the strangers, giving them clothes to wear, home-cooked food to eat, a sense of community and even a little distracting entertainment (including kissing a just-caught cod as part of an initiation to becoming an honorary Ganderian).

It was an extraordinary display of kindness, unbelievable in these tempestuous times of fear, hate, suspicion and xenophobia.

Canadian husband-and-wife team Irene Sankoff and David Heim wrote the book, music and lyrics of the heartwarming musical that had its world premiere in 2015 for sold-out, extended runs at La Jolla Playhouse and Seattle Repertory Theatre.

The show opened on Broadway in 2017 and was a huge hit, garnering seven Tony nominations and winning the coveted prize for La Jolla Playhouse artistic director Christopher Ashley for Best Direction of a Musical.

Although the “post-pandemic” plan is to re-open on Broadway on Sept. 21, a Broadway performance, filmed earlier this year for an audience of 9/11 survivors and frontline workers, just dropped on Apple TV+. Now everyone, everywhere can see this cathartic, heart-rending and often joyful presentation.

Half of the diverse 12-member ensemble is from the original Broadway cast. Tony-nominated Jenn Colella is back as Beverley Bass, the glass-ceiling-smashing American Airlines pilot who sings the affecting story of her lifelong love of flight, “Me and the Sky.”

Actors playing other unforgettable characters, all based on real Gander residents with whom they closely bonded, are also there.

Having seen the show three times while it was here (something I never do, but this one moved and touched me so much), I sorely missed beloved local actor Geno Carr playing Oz, the police constable (and others). He left the show a while back, after more than ,1000 performances, to return to his family in San Diego. It’s a shame he couldn’t have been in the film; his vitality and humor were an excellent addition.

But the ingenuity of the fluid staging (and the foot-stomping, clever chair-moving choreography by Kelly Devine), as well as the infectious energy of the players and the upbeat, Irish-inflected score remain intact, and keep the show irresistible.

A bonus of being at the La Jolla opening was seeing some of the real folks from Gander, including a couple of the “plane people” (she a Texan, he a Brit) who met and fell in love in those harrowing days, and are still married.

At the end of the film, during the credits, there are wonderful photos of the Ganderians and “Come Fromstranger Awayers” (aka plane people) with the actors who play them, so you, too, can get a taste of that art-imitates-life excitement.

You should know that this is not a movie per se; it’s a staged production on film, with the audience frequently in view. But there is one moment that takes effective advantage of film technology, offering a jib-shot aerial view of the proceedings.

The closeups and tight shots preserve the show’s sense of intimacy, so you almost feel like you’re there. And the rapturous response of the onlookers helps.

Still, there was nothing like being there, watching the inventive, swirling movement and character quick-changes happen live, before your eyes.

Speaking of eyes, there’s unlikely to be a dry one in your house after viewing.

There’s something so beautiful and inspirational about the warmth, compassion, and incredible generosity of these island folks. They kept saying “You’d do the same,” but I wonder.

To know that there are still people like that on earth (with regular Zoom and in-person reunions of the ‘plane people’ and the residents), who would embrace complete strangers in such a magnanimous way, restores your faith in the best of humankind.

Even in these dark, divisive times, maybe there’s still hope for us after all.

Pat Launer, a member of the American Theatre Critics Association, is a long-time San Diego arts writer and an Emmy Award-winning theater critic. An archive of her previews and reviews can be found at patlauner.com.

(This story first appeared in Times of San Diego and was written by Pat Launer. It was made available as part of the CalMatters Network.)

Next
Then & Now: Haugh’s Pentagon Perspective