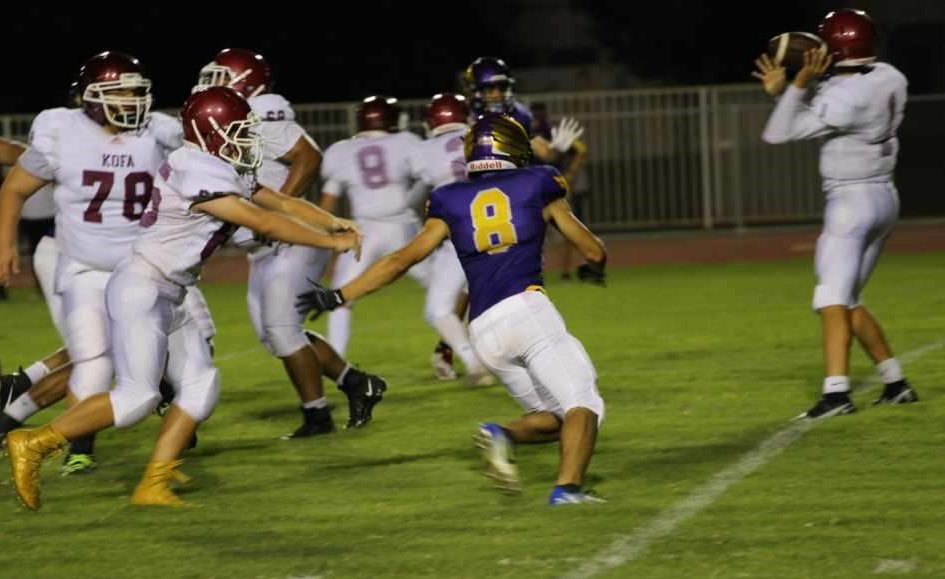 Southwest High’s Anthony Chavez gets around the edge and makes a move to pressure Kofa quarterback Leo Koivu during the Eagles’ 48-6 thrashing of the Kings of Yuma in El Centro on Saturday, Sept. 11. | PHOTO COURTESY OF JALEN FONG/VALLEY SPORTS NETWORK
Home
Sports
In Sports

The Eagles (2-2 overall) got two early rushing touchdowns from senior running back Estevan McDonough en route to the victory. Sophomore quarterback Logan Jungers had a long touchdown pass to put the Eagles up 21-0 early in the second quarter and the route was on.

Southwest will be traveling to Solana Beach to take on Santa Fe Christian in a nonleague contest at 7 p.m. on Friday, Sept. 17.

TEMECULA — Calipatria High is 1-2 on the season after a 26-0 victory against Saint Jeanne de Lestonnac Catholic School in a nonleague matchup here on Saturday, Sept. 11.

The Hornets opened the season with a forfeit loss to Desert Mirage after members of the Calipatria team were quarantined due to COVID protocols. The Hornets lost to Calexico, 27-0, back on Sept. 3.

Up next for the Hornets is a trip to Carlsbad to take on the Army-Navy Academy with kickoff slated for 7 p.m. Friday, Sept. 17.

BLYTHE — Palo Verde Valley built a 13-0 lead at halftime and held on to defeat Morse High of San Diego, 20-16, in a nonleague game here on Saturday, Sept. 11.

The Yellowjackets (2-1 overall) had a 20-8 lead at the end of the third quarter.

Palo Verde opened the season with a 15-6 win at Calexico but followed that with a 21-10 loss at Coachella Valley the following week.

Next up for the Yellowjackets is a home contest against Shadow Hills High of Indio, set for 7 p.m. Thursday, Sept. 16.

(This story was updated at noon Sunday, Sept. 12. The incorrect score was provided for Calipatria after a highly regarded prep sports website posted an incorrect score late Saturday night, Sept. 11. The score has been fixed her and on the reporting site.)