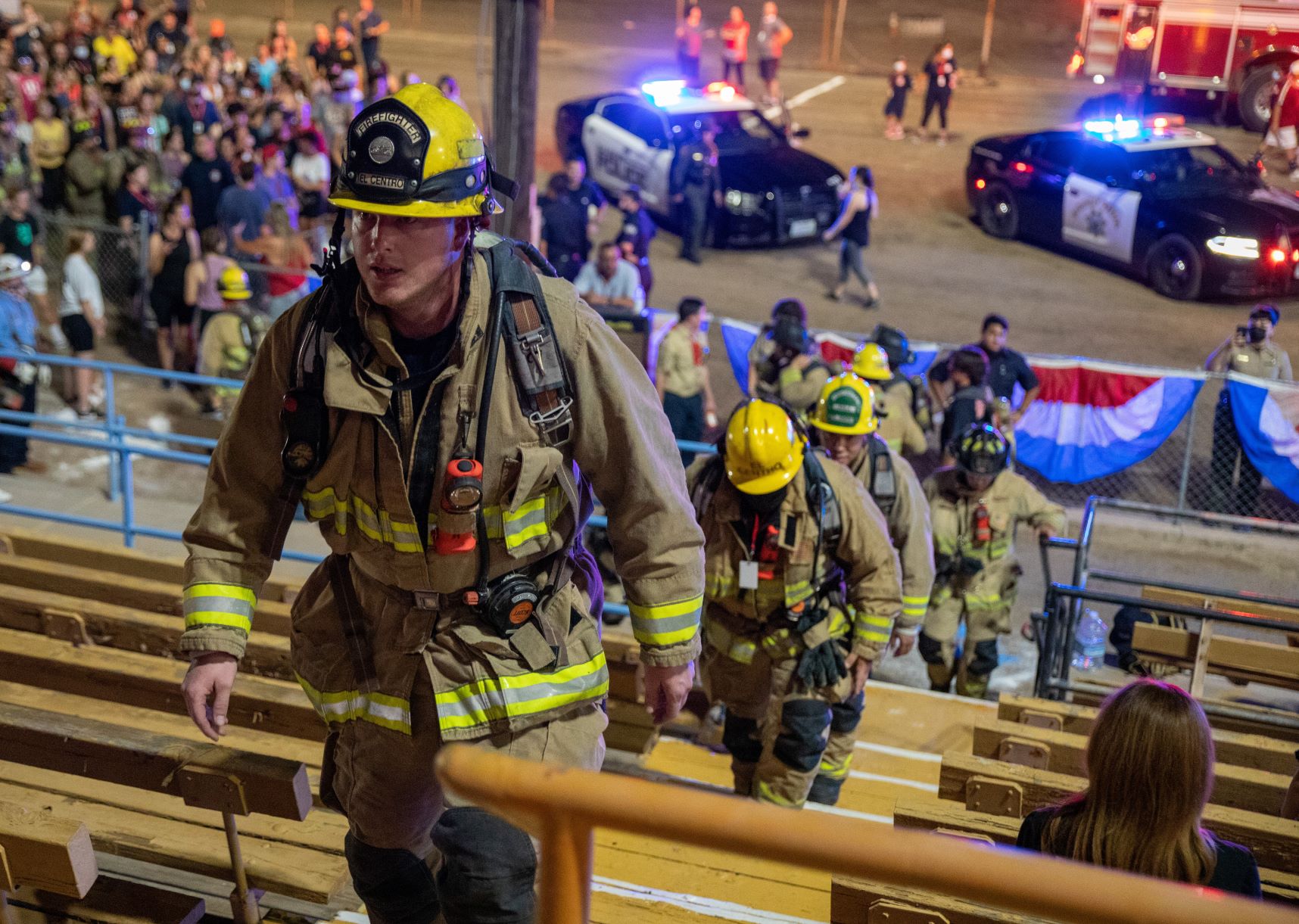 The first wave of local firefighters — followed by a sea of public participants snaking behind — start the 9/11 Memorial Stair Climb on Saturday night, Sept. 11, at the Imperial Valley Fairgrounds in Imperial to raise funds and commemorate the 20th anniversary of the Sept. 11, 2001, terrorist attacks. Some 475 people participated in the climb Saturday, exceeding the IV 9/11 Committee’s goal of 413 climbers to represent the first responders who lost their lives, 343 firefighters, 60 police officers and 13 paramedics and emergency medical technicians. | KENNY ROBERTSON PHOTO
In Featured StoriesPublic SafetyRegional News

IMPERIAL — Kate McAvoy was just 14 years old when her father died in the World Trade Center collapse, one among 413 first responders who perished on Sept. 11, 2001, answering the call of duty.

New York City Firefighter John McAvoy, age 47 at the time, was believed to have died sometime after reaching the 31st floor of the South Tower — his last known location — when it collapsed onto the streets of Manhattan at 9:59 a.m. Eastern time.

His story was shared before the nearly 500 people who participated in what appears to have been the only 9/11 Memorial Stair Climb in California on Saturday night, Sept. 11, the 20th anniversary of the terrorist attacks in New York, Washington, D.C., and the loss of life that occurred when passengers overtook a fourth hijacked plane over Pennsylvania on its way to cause more destruction.

Among the community of first responders already closely bound together through the shared sacrifices of the job, Kate McAvoy’s presence was the direct connection to the events that inspired so many of them to work in the public safety field and to remind some of the youngest fire service members the human toll 9/11 exacted on their brotherhood.

McAvoy spoke briefly at the memorial climb, saying later that she appreciates smaller events because larger remembrances can be “overwhelming” and “too big,” whereas “these events are more intimate.”

For Imperial County fire Battalion Chief Angel Morales, the memorial stair climb that took place at the Imperial Valley Fairgrounds in Imperial brings back memories of his early days as a firefighter and how 9/11 focused him.

“I was a new firefighter; it really opened up my eyes to be more situationally aware in your surroundings and community. The level of dedication and commitment (heightened for me),” he said as he stood by a county fire engine, the lights and sirens of emergency vehicles going on around him as the stair climb got under way.

Eight years ago, Tiffinie Macias, business assistant at the I.V. Fairgrounds, along with El Centro Firefighter Mathew Zinn, formed the Imperial Valley 9/11 Committee to come up with some form of community remembrance like the memorial stair climb. The IV 9/11 Committee, which has grown to six members over the years, works with the nonprofit National Fallen Firefighters Foundation to raise funds through the stair climb to support programs that help serve and support firefighter families.

Macias explained the stair climb honors the firefighters killed in the Twin Towers by having participants climb or walk the equivalent of the 110 stories of the World Trade Center. This year, the committee hoped to have 413 climbers to represent the first responders who lost their lives — 343 firefighters, 60 police officers, 13 paramedics and emergency medical technicians — but Macias said those who participated totaled about 475, exceeding the committee’s goal and expectations.

“This is my first year with the committee, but I’ve done the 9/11 stair climb in the past, (and this year) I wanted to get involved because of how special it is,” he said.

Those who participated on Saturday night, both fire personnel and other first responders, as well as members of the public, were presented with a badge that holds a name and photo of one of the first responders that lost their lives on 9/11, so that the participants know who they are climbing for.

Before and after the climb, participants and members of the public were able to walk around the nine “pillars” spaced out on the floor of the grandstands area that were posted with photos and short bios of each first responder who died in the Twin Towers attacks.

The pillars were similar to the area in New York City where family members and fellow first responders posted missing persons posters and photos in the days following the 9/11 attacks.

Battalion Chief Morales said that he continues to carry the meaning of 9/11 with him in his daily life, and now, as a leader, he makes sure that the younger generation of firefighters understands the importance of the day.

“A lot of the young firefighters we have right now were barely born, you know, 20 years ago. We have a few 18-19-year-olds. We have to educate them, and of course, they see what happened on TV, but it can be a bit of a challenge,” Morales said, for them to understand the impact.

Saturday was the first stair climb for 24-year-old Jose Ornelas, a Westmorland firefighter.

Covered in sweat and in full turnout gear, Ornelas stopped to rest at the top of the concrete bleachers of the grandstand.

“Ever since I was a little kid, I was always fascinated with the fire engines,” he told this newspaper, adding be joined the Westmorland department in 2019.

“After I became a firefighter, I realized how much it impacted the fire community,” Ornelas said of 9/11. “It’s something that we got to honor nowadays. This made me think that, you could be fine, and then the next day you could be gone.”

The climb was more strenuous than Ornelas had anticipated.

“Physically, it was a lot. My bunker (turnout gear) weighs 25 pounds, and I had to do it with no oxygen” in his tank, Ornelas said.

Oscar Orozco of Calexico wasn’t even born when the Twin Towers fell, but he still felt a connection to what was happening on Saturday. The 18-year-old is with the fire academy at Imperial Valley College.

After completing the stair climb, Orozco stood by the bleachers and reflected.

“This is my first time, and I didn’t that it was going to be this big,” he said.

When asked about his thoughts on 9/11 and its place in history, Orozco thought back to what his fire academy instructor shared.

“This is a significant event, because what they did (the first responders) is not something anyone is willing to do. It (was) really brave of them.”

More on Kate and John McAvoy

Kate McAvoy, a Los Angeles resident, sought out the event at the IV Fairgrounds as a way to pay tribute to her father and do something she had never done before.

“I wanted to do a stair climb because when I was traveling in Peru, I met a fireman and his wife from San Antonio, (who) every year since (9/11) he did a stair climb in my dad’s name, and since then I’ve always wanted to check on out,” McAvoy told this newspaper.

McAvoy said she goes back and forth every year when deciding how to honor her father’s life’s work. Some years it’s intimate, gathering with her family and friends, people who knew her father and who can truly empathize with her loss.

Other years, McAvoy does attend public events, if only to be a part of a community remembrance that reminds her people haven’t forgotten that life-altering day.

The 34-year-old drove down from Los Angeles with her husband, Kirk Bryan, their dog, Maverick, and her friend.

McAvoy remembers that her dad, whether her was working or not, was always ready to help anyone — whether it was someone that needed roadside assistance or handy work in their house — he was there for his community

The word “loyal” kept popping up in her conversation about John McAvoy: he was a loyal friend, a loyal family member, and loyal coworker, understanding the meaning behind the word in everything he did.

Kate McAvoy remembers that her father loved his job so much he would even create maps of Manhattan and would pinpoint all the fire boxes and hydrants in the city.

She said that when her dad would help others with manual labor, he often wouldn’t accept money. John McAvoy loved crime novels, roller skating, was a really good cook, liked to do outdoor activities with his family, and could talk on the phone with his friends for hours, Kate said.

When thinking about her life now, Kate McAvoy hopes that her father would be proud of her and her family.

He most likely would, considering McAvoy has a master’s degree in Public Health and is completing a second master’s for Science in Nursing, and her brother, Kevin, age 31, has a Ph.D. and is doing research at Cornell University for Asperger’s syndrome. Their mother, Paula, is a retired nurse in New York.

When asked if the emphasis on the 20th anniversary of 9/11 made this year more difficult than most, she said, “I don’t think the emphasis has made a difference; it has all been heavy, in an already heavy time,” alluding to the COVID-19 pandemic.

Fitting to what the brotherhood of firefighters meant before 9/11 and what was strengthened after, McAvoy looks back to the advice her father gave her in a card for her eighth-grade graduation.

“It’s important to keep friends close, they’ll get you through the hard times.”

Next
Traditional Mass for First Responders Continues in Calexico