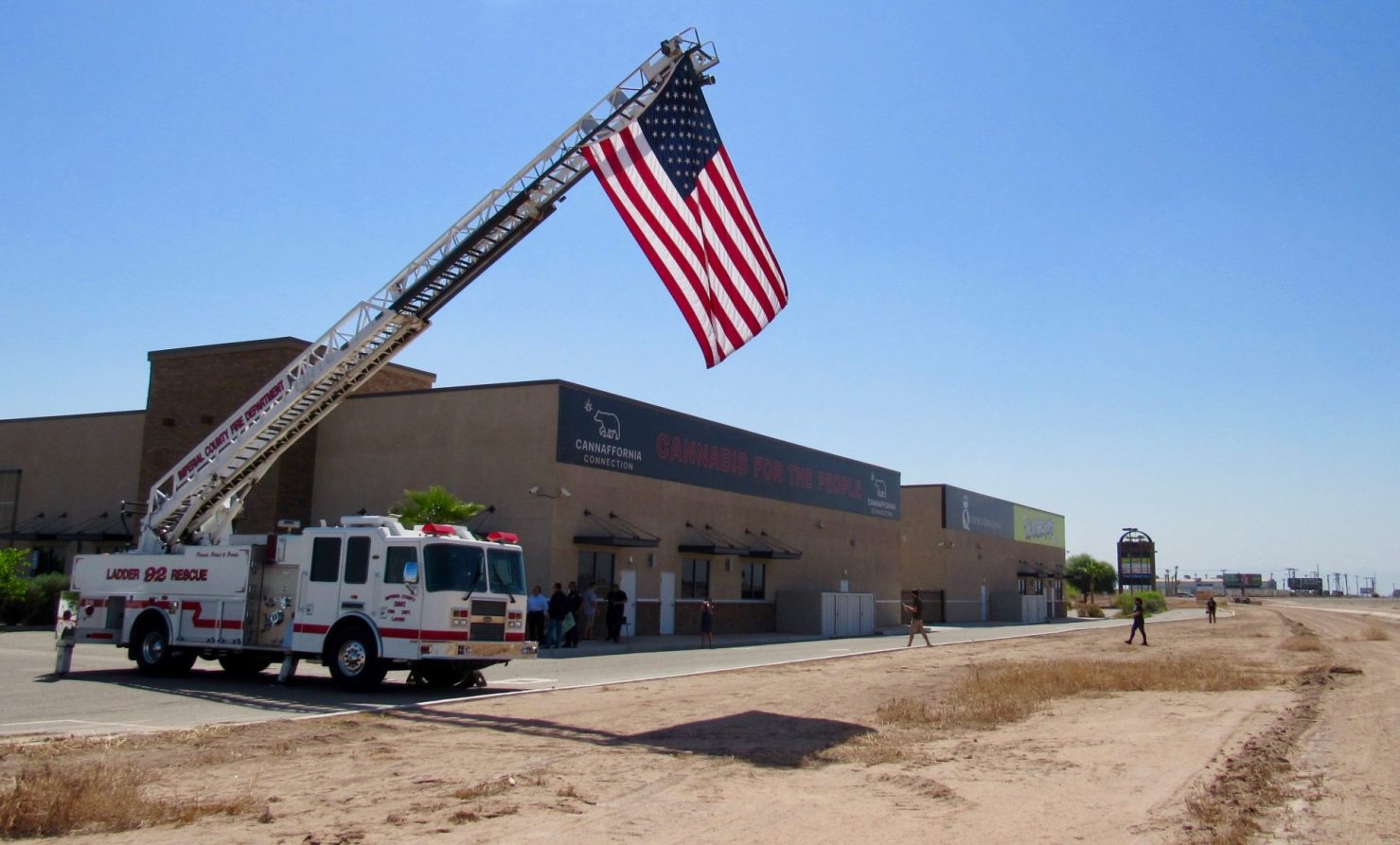 The American flag is raised in honor of 9/11 victims during Cannaffornia’s grand-opening event at the former Imperial Center in Heber off Highway 111 and Heber Road on Saturday, Sept. 11. | MARCIE LANDEROS PHOTO
Home
Business
In Business

Queen of Dragons, The Other Guys Consumption Lounges Try to Have a Patriot Day-themed Event

HEBER — Cannaffornia held its grand-opening event for its two consumption and retail lounges, Queen of Dragons and The Other Guys, on Saturday, Sept. 11, recognizing the fallen on 9/11 by raising a flag in their honor, donating to the 9/11 stair climb and the Battle Brothers Fund, then announcing Cannaffornia’s “Compassion Program” to help low-income medical marijuana patients.

While a 9/11 memorial as a grand-opening event might seem strange at first, for Cannaffornia Chief Operating Officer Mai Vue, it made complete sense.

“Up in Northern California, you know, we have a lot of, well, we call it fire season,” Vue said in an interview alongside Cannaffornia Chief Executive Officer Tim Wright, after a tour of the facility.

Vue, who lives in Shasta County in Northern California, expressed that living in that area caused her to develop a tremendous amount of respect for firefighters.

“So, we really support and honor our first responders, and the firefighters, because they keep us safe,” she said.

“We wanted to make sure that our money was put to good use,” Wright said, expanding on Vue’s statement. “For a grand opening, you can spend money on a lot of different things, so we donated for the local stair climb for the local fire department.”

For the last eight years, the Imperial Valley Fairgrounds has been home to the stair  climb event, a fundraiser and memorial to benefit the National Fallen Firefighters Foundation, a nonprofit organization with programs that support firefighter families, and the FDNY Counseling Services Unit.

After the flag was raised, the firefighters in attendance stood with Wright and Castillo for a photograph under the flag, holding an oversized check for $5,000.

In an interview before the ceremony, county fire Engineer Ramon Nava opened up about how he felt about attending such an unconventional memorial.

“It’s important to raise awareness in any way you can,” he said.

Nava, who shared that even at 5 years old, said he understood that something major had happened: “It was such a tragic day. We should all be standing together now.”

“Always support anybody who donates their time to help people,” Wright stated when asked why he chose to have their grand opening in memorial to 9/11. “You gotta honor and respect them, firefighters, first responders, and veterans as well. So, we want to give back.”

One of the ways that he was able to give back, Wright said, was to connect with Helmand Valley Growers Company of San Diego. Hemland Valley was founded and operated by U.S. Marines Crops veterans in the amphibious special operations unit (“Marine Raiders”), with a mission to effectively prove the benefits of medical cannabis for military veterans.

“There’s not a lot of cannabis research out there. There’s very little, in fact,” Wright said. “Basically, what sold me on them is they take all their proceeds and donate it to PTSD research.”

They partner with the Battle Brothers Fund, whose mission is to prevent veterans taking their own life through alternatives to standard medical treatments, through holistic approaches.

The approaches includes focusing on veteran’s personal life, placing them into mentorship and community programs, and focusing on dignity through labor, and paving the way for economic growth through apprenticeship and placing veterans in positions in financial growth sectors.

Battle Brothers also supports non-opiate based treatment for physical and psychological injuries related to military service, including PTSD, TBI, alcoholism, acute pain and trauma, including the use of medical marijuana.

“In the ’30s and ’40s, marijuana appeared in over 400,000 products. It was extensively used,” Supervisor Castillo started explaining during an interview just before touring the facility. Castillo is the District 5 supervisor for Heber, where Cannaffornia is located, and he opened up on his journey to educate himself on the medical uses of marijuana.

Castillo, who was clear that he does not support recreational use, said his research into its medical uses made a supporter.

Not wanting to stand on the sidelines, Cannaffornia launched its “Compassion Project” on Saturday, in partnership with Select and Dear Cannabis.

Patients who sign up receive cannabis products at significantly reduced prices, in exchange for participating in medical cannabis studies.

“We’ve always wanted to expand the Compassionate Program, which the Queen of Dragons is known for, and that was always fair-value products for people who use it for alternative medicine. They don’t have the ability to take it to their insurance company, what’s the best price, what’s safe product, consistently, so people can build a routine around it,” Wright said about launching the program in Imperial County.

The need to provide safe, affordable cannabis was always built into the company, he said.

“We worked very diligently to become vertical, and successfully so, 65 percent of the things we sell we manufacture, and we package, we do all those good things. We have vertical partners as well, some large brands that support us, and likewise we support them with product to make their materials,” Wright added.

“That way we can pass the cost savings on to the consumers who really need it,” Vue added.

Wright explained that the reason Cannaffornia has two storefronts opened nearby is, each has a different focus.

Queen of Dragons sells products grown and manufactured by Cannaffornia at other sites. Wright told this newspaper before that the intention is to add a cultivation and manufacturing element to the Heber complex.

The Other Guys is just that, a retail space for products produced by Cannaffornia’s partners and other cannabis companies.