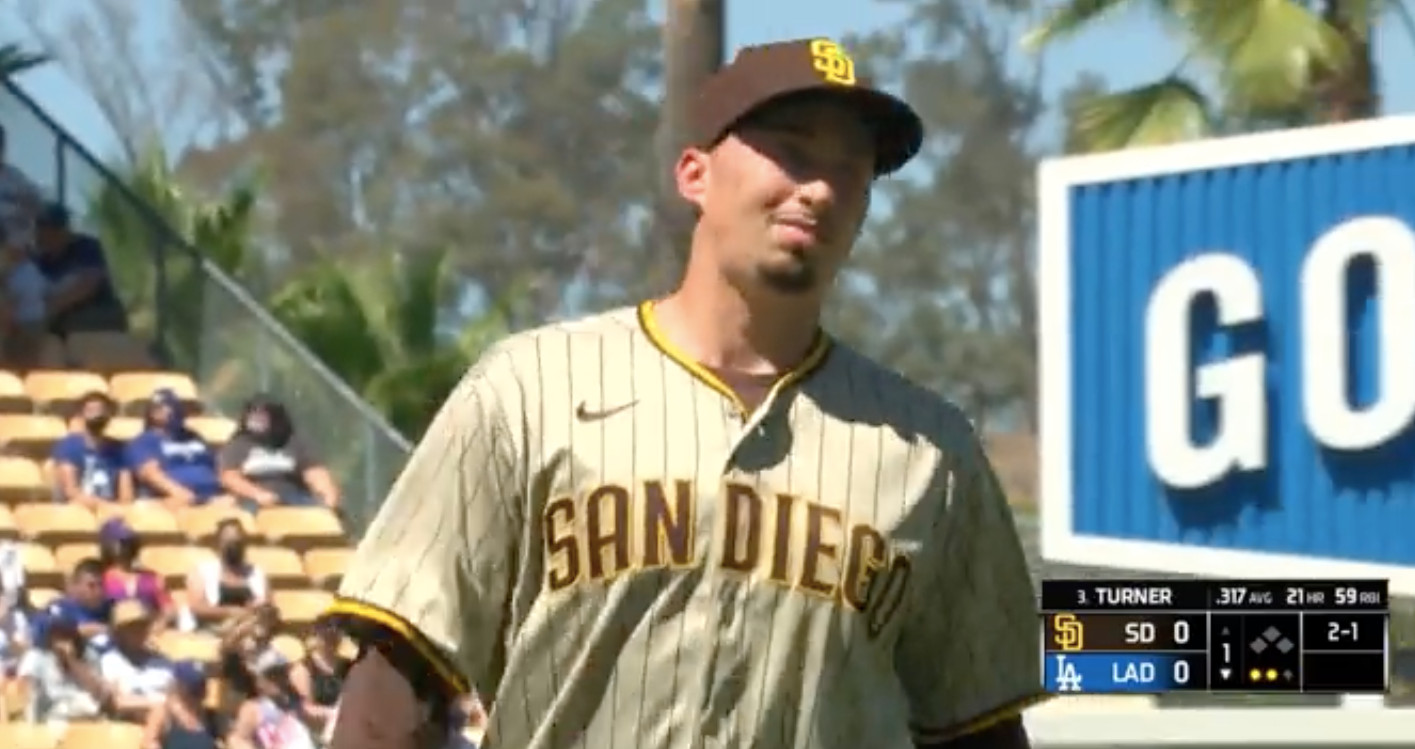 Blake Snell after signaling to a trainer in the 1st inning Sunday. Photo credit: Screen shot, @ChadMoriyama, via Twitter
Home
California
In California

Padres Lose Snell While Suffering Another Sweep at Hands of Dodgers

The Padres suffered through a brutal weekend in Los Angeles, as the Dodgers swept them for the second time in three weeks, and they lost their second player in three games.

Blake Snell lasted only 11 pitches Sunday, Sept. 12, in his team’s 8-0 loss. He left the mound in the bottom of the first inning with a noticeable hitch in his step, due to what the Padres called tightness in his left adductor – an inner thigh muscle.

Manager Jayce Tingler said Snell has dealt with the issue before, but usually in the later innings.

“He already feels a little bit better, Tingler said after the game. “So hopefully we caught it early.”

Both Snell and infielder Jake Cronenworth, who suffered a finger fracture when hit by a pitch Friday, Sept. 10, are listed as day-to-day.

Dodger starter Max Scherzer shut the Padres down, pitching a perfect game through seven. He also recorded the 3,000th strikeout of his career when he set down Eric Hosmer in the fifth.

The Padres ended up with one hit, as Hosmer gained a measure of revenge to end the perfecto in the eighth with a one-out double. But he also fell victim – along with Fernando Tatis Jr. and Tommy Pham – to an “immaculate inning” – as Scherzer struck out the side in the second on nine total pitches.

The road trip only gets harder Monday. The Padres open a four-game set against the division-leading San Francisco Giants, winners of seven straight.

They remain in a deadlock with the Cincinnati Reds for the remaining National League wild-card spot, with St. Louis edging closer.

The Cardinals, who the Padres face beginning Friday, sit one game back.

(This story first appeared in Times of San Diego and is being made available through the CalMatters Network.)