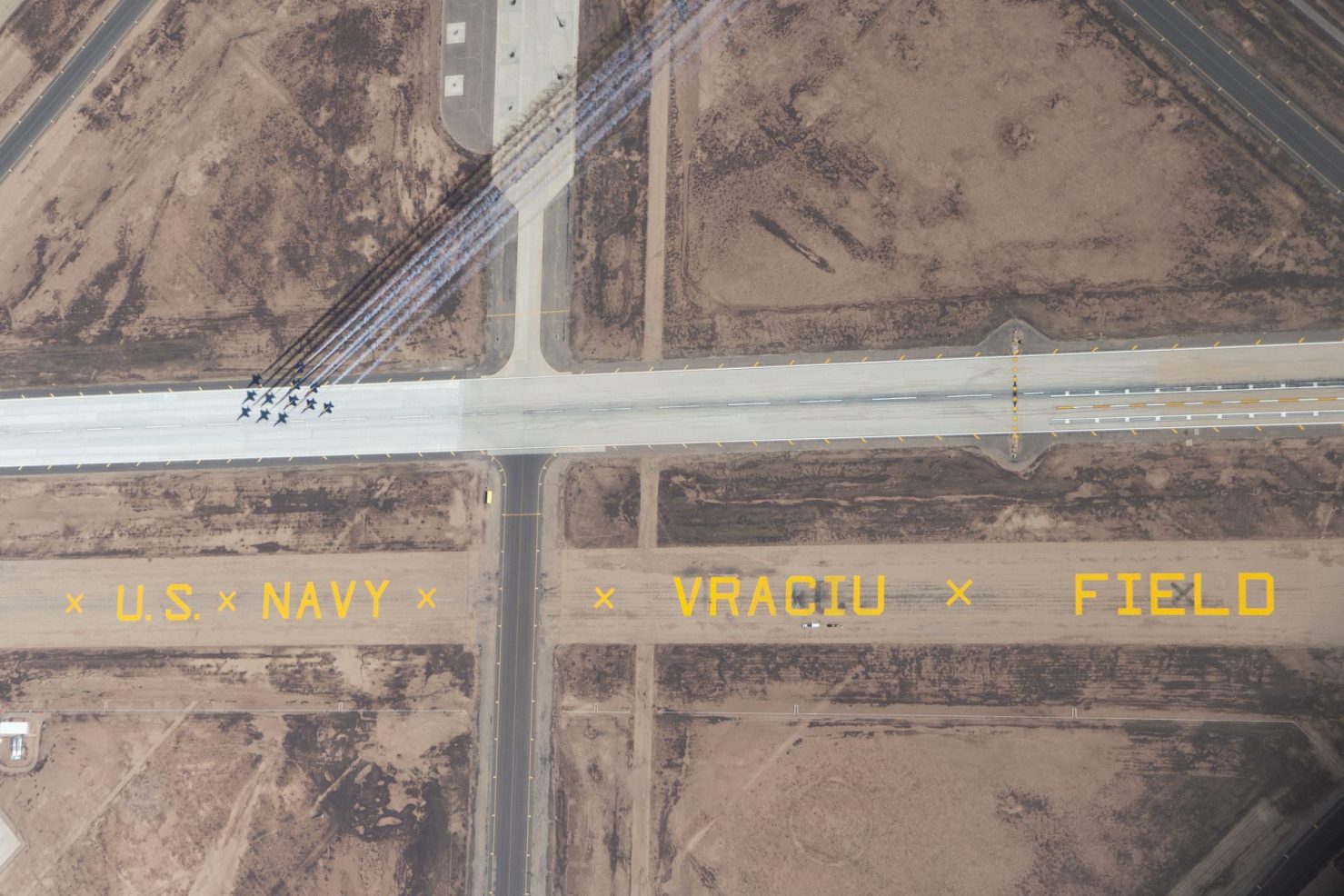 A legendary pilot in naval history, Cmdr. Alexander Vraciu was a “Top Gun,” Navy Cross recipient, and Medal of Honor nominee during WWII, who had direct tied to NAF El Centro. In 2019, NAF officially named its airfield “Vraciu Field” in honor of the pilot who was ranked fourth among the Navy’s flying aces, with 19 enemy planes downed during flight and 21 destroyed on the ground.

“It was an honor to meet members of the Vraciu family as they carry Alexander Vraciu’s legacy forward.” Perkins said. “Throughout NAF El Centro’s 75-year history, our claim to fame has been that nearly every aircraft carrier aviator will spend time at here. Many come back multiple times to use our bombing ranges during critical training for the nation’s missions downrange, and all of them learn the Vraciu legacy.”

Marc Vraciu is the youngest son of Cmdr. Vraciau and named after Adm. Marc Andrew “Pete” Mitscher, a pioneer in naval aviation. His son, Torben, toured the facility of his grandfather’s namesake with aspirations of someday following in his footsteps as a Naval aviator and perhaps attending the Naval Academy.

“Torben is proud and inspired by his grandfather’s legacy,” Marc Vraciu said. “We might have a future flyer in the family if Torben’s path leads to the Naval Academy. He would certainly be the talk of the town. Whatever decision he makes, he now has a better understanding of his identity and how he can carry this forward in the future.”

Cmdr. Vraciu was tagged to be the skipper of VF-51, of Fighter Squadron 51, also known as the “Screaming Eagles.” He assumed control of the squadron of FJ-3 Furies (the model of plane) in March 1956.

The squadron prepared for what was an annual aerial gunnery meet at NAF El Centro in January 1957. It was the highlight of every fighter squadron’s year, according to NAF history.

Cmdr. Vraciu would continue to train warfighters at NAF El Centro until retiring his helmet on Jan. 1, 1964, after 3,550 hours and 141 carrier landings.

“Early in the base’s legacy, the Fleet Air Gunnery Unit, the pre-cursor to ‘Top Gun,’ operated from NAF El Centro,” Perkins said. “In addition to learning air-to-ground bombing skills, air-to-air gunnery was taught in the skies over the Imperial Valley. These skills, exhibited by Vraciu during WWII combat missions and honed at NAF El Centro, are critical in carrier-based airpower’s success during operations around the globe from the 1940s, until today.”

Touring the facilities at NAF El Centro, Torben Vraciu was inspired and stated, “It would be an honor to serve like my grandfather.”

The mission of NAF El Centro is to support the combat training and readiness of the warfighter. This includes air operations support to operational fleet and training squadrons as well as squadrons from other services (Marine Corps, Army, Air Force) and international military partners.

This story was written by Navy personnel.

Next
Dr. Vo’s Offices Raided by Feds for 2nd Time in a Year