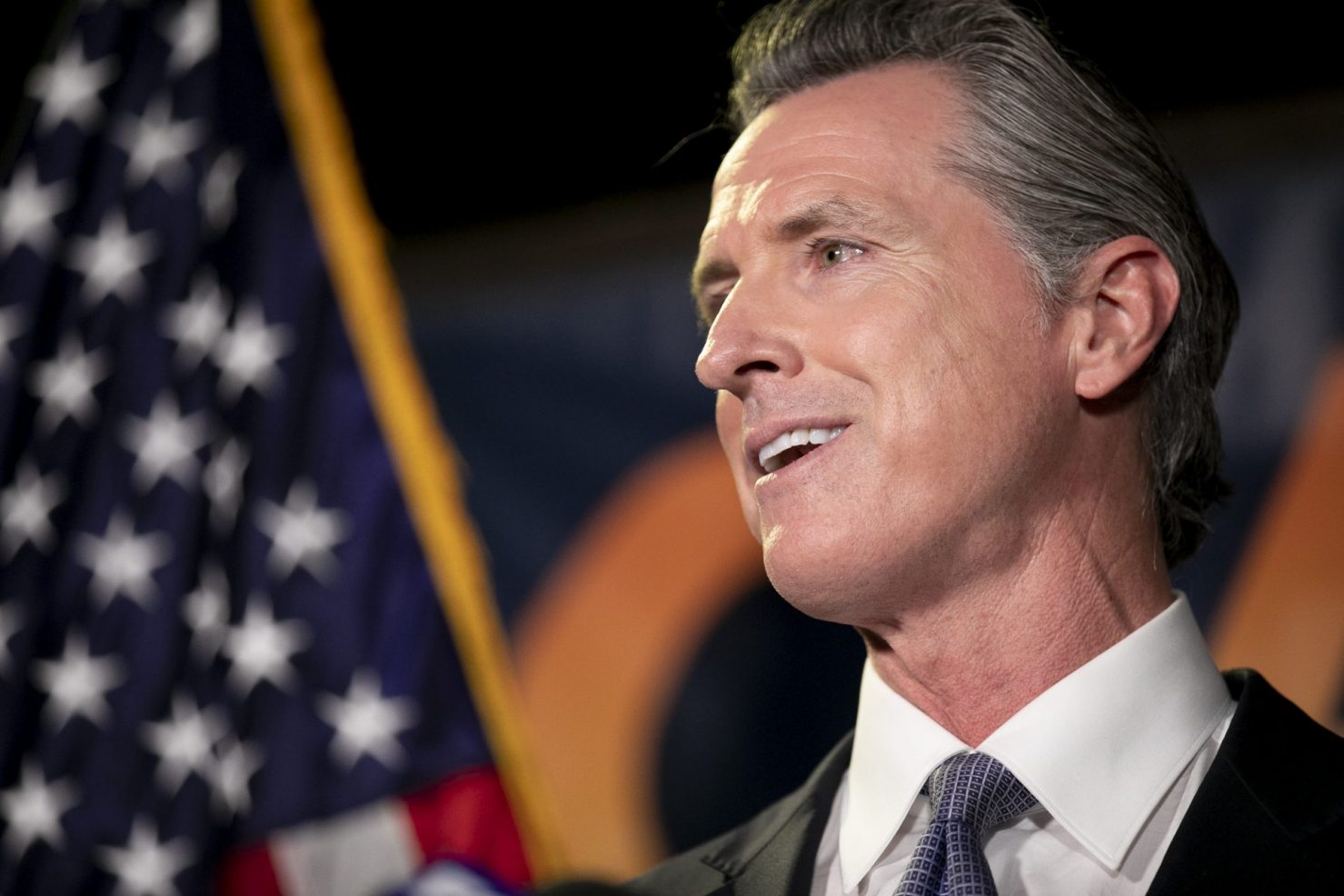 Gov. Gavin Newsom gives a speech following his projected victory in the recall election at the California Democratic Party headquarters in Sacramento on Sept. 14, 2021. | PHOTO BY ANNE WERNIKOFF, CALMATTERS
Home
California
In California

If Gov. Newsom defeats the recall, as appears likely, it will give him a head start in the 2022 gubernatorial election.

And after all that, it wasn’t especially close. After initial returns showed the recall failing by a nearly 70 percent to 30 percent margin, the Associated Press and TV networks called the race for Newsom.

Now begins a new contest: To spin the results most favorably for the 2022 election — which starts right now.

For Gov. Gavin Newsom and his political team, the last six months of campaigning offer an electoral blueprint to seek four more years.

The governor’s apparent victory ought to demonstrate to Democrats, both in California and elsewhere, the power of “showing what the alternative is,” said Newsom campaign spokesperson Nathan Click.

“So much of what we’ve tried to do — from branding it the ‘Republican recall’ to talking a lot about Larry Elder and all the other candidates’ opposition to vaccine mandates and mask mandates — we’re trying to show what’s behind door number 2,” he said. “We were telling the story of what would happen and the other guys were — and I think that’s really powerful.”

The campaign was nothing if not consistent on that point. On Monday, President Joe Biden jetted to California to make the closing argument against the recall at a campaign rally in Long Beach. Though he praised the governor’s leadership during the pandemic, the president spent the bulk of his speech hammering Elder, Newsom’s top Republican rival, who Biden described as “the clone of Donald Trump.”

Biden’s visit — along with pit stops by Vice President Kamala Harris and Massachusetts Sen. Elizabeth Warren — offer another obvious lesson, said Bill Wong, political director of the state Assembly Democrats. “Every campaign from here on out, at least for the immediate future, is going to be nationalized with regard to running against the Republican agenda,” he said.

Juan Rodriguez, manager of the anti-recall campaign, said the unusually high Democratic turnout in a special election, which allowed Newsom to stay in the governor’s office, amounts to “a rejection of the conventional wisdom.”

Running on public health restrictions, elevating contentious national issues and talking about former President Trump — the campaign “can really be a case study that should be looked at closely for how to get people energized,” he said.

The fear of Elder, and Newsom’s relentless characterization of the election as a “Republican recall,” likely did help keep the vote “no” coalition together. Whatever reservations voters might have had with the governor, “the potential damage by a Trump-loving Republican in the governor’s office” rallied most Democrats behind Newsom, said Amar Shergill, chairperson of the California Democratic Party’s progressive caucus.

But the time for playing nice is now over, he said.

“I don’t think the governor or his advisor circle are so naive as to think that a big win and the defeat of the recall election is going to result in smooth sailing through the next election,” said Shergill. He said he and other progressive activists plan to begin lobbying the governor “to hold fast to his promise” to push forward a state-run universal health insurance program.

“You ignore the progressive movement at your own peril,” Shergill added.

But Rose Kapolczynski, a Democratic political strategist, said Newsom faces no serious risks as he prepares to run for re-election next year — certainly not from within his own party.

Imagine this, she said: “Progressive congressmember X decides to run against Gavin Newsom because he still hasn’t enacted single-payer health care. The first thing that everyone’s going to see is that progressive congress members X urged all of his supporters to vote no on the recall and save Gavin Newsom.”

Kapolczynski said she doesn’t see much of a threat coming from Republicans, either.

In 2020, the state GOP won four congressional seats, in part by running a more ethnically diverse and ideologically expansive crop of candidates. “Larry Elder comes along and destroys all that work by reminding people how extreme some Republicans are,” she said.

The emergence of Elder as a leading candidate was an “absolute boon” for Newsom, said Garry South, also a Democratic political consultant. It transformed what could have been a faceless referendum on the governor’s record into a strictly partisan standoff between a generally popular Democratic governor and a specific Republican.

In other words, it turned it into exactly the kind of election Newsom will likely face next November. It also helped that Elder is a firebrand who “is so out of sync with Californians he might as well be living in outer space,” South added.

Harmeet Dhillon, a California member of the Republican National Committee, said she doubts a different candidate would have been any less polarizing, only because Democrats would have been equally vociferous in their criticisms.

If Kevin Faulconer, the former mayor of San Diego who positioned himself as a relative moderate in the race, “set the electorate on fire and had Larry Elder not gotten into the race, you would have still seen Kevin Faulconer painted as some kind of Hitler,” she said.

Rodriguez with the No campaign stopped short of that comparison, but agreed that Elder wasn’t unique. “Whether it was Larry Elder, John Cox or Kevin Faulconer, they all represent a view of the world empowered by the national Republican Party,” he said. “It’s all an example of Trumpism.”

It remains unclear which Republican, if anyone, could mount a credible challenge against Newsom.

Elder has vowed to run again; today, he called himself a “political force.” But he would face long odds head-to-head against Newsom in reliably Democratic California.

Elder’s success, however, has humbled much of the GOP bench, including Faulconer, 2018 gubernatorial candidate John Cox and Assemblymember Kevin Kiley of Rocklin.

In the early vote tally, Elder had 42 percent of the vote among replacement candidates, compared to 18 percent total for Faulconer, Cox and Kiley.

Still, Matt Rexroad, a political consultant who tends to work for moderate Republicans, said it’s not all doom and gloom for the state’s second largest party. A Republican isn’t likely to occupy the governor’s office anytime soon, but that was never very likely in California. Newsom “is going to sleep walk into 2022, it’s going to be a yawner,” Rexroad conceded.

But a snoozer of a gubernatorial race at the top of the ticket coupled with a network of pro-recall activists still fuming across the state could result in the kind of GOP-heavy turnout that midterm victories in congressional and legislative races are made of, he said.

The state party “has used this opportunity to rally the troops,” he said. “And this energy could be used to pick up some seats in the Legislature or in Congress.”

“What’s the best thing that happened to the Democratic Party in 2018?” asked Rexroad, referring to the “blue wave” midterms in which Democrats flipped 41 congressional seats, including 8 in California. “Probably how much they hated Donald Trump.”

As early as Monday, some recall candidates were tamping down expectations, reminding supporters that no matter the outcome, the fact that the recall campaign got as far as it did should count as its own success.

Kiley said the grassroots organizations that sprouted up across the state to boost the recall effort will remain an electoral force to reckon with in the coming months. “The idea that this is somehow a mandate, that Californians are endorsing (Newsom’s) failed leadership, is pretty far-fetched,” he said. He declined to say whether he plans to run for governor again next year.

This energy could be used to pick up some seats in the Legislature or in Congress.”

Elder has taken a less holistic view of the recall results. Even before the polls closed, the candidate began to suggest, a la former President Trump in 2020, that the recall defeat, even in a state where Democrats outnumber Republicans nearly two-to-one, could only be the result of fraud.

Elder’s decision to take a page from the former president’s handbook is only the latest indication that conspiracy theorizing about election results has found a permanent home in the Republican Party — even in California.

And while the storming of the U.S. Capitol on Jan. 6 showed the danger of questioning the democratic process, for California Republicans hoping to emerge from the recall invigorated, the politics might be lousy, too.

Political parties in democracies are supposed to be self-correcting: Those that are punished at the polls are incentivized to come up with a better message or a more appealing set of ideas, said David Becker, executive director of the Center for Election Innovation & Research, which advocates for more expansive and secure election policies.

Attributing failure to fraud will get in the way of that necessary self-reflection. “A party that misdiagnoses the reason behind its electoral defeat is very unlikely to fix itself,” he said.

(This story first appeared on CalMatters and was written by Ben Christopher. CalMatters reporter Mikhail Zinshteyn contributed to this story. It was being made available as part of the CalMatters Network.)