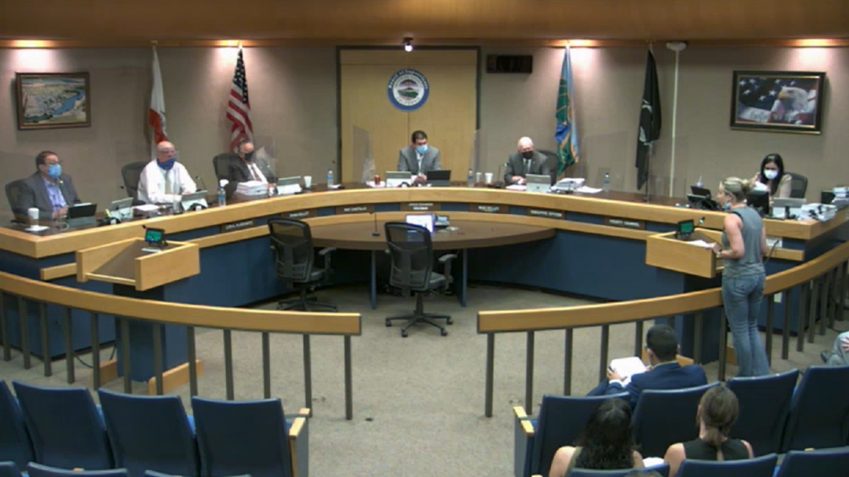 Imperial Valley resident Autumn Plourd speaks to the Imperial County Board of Supervisors on Tuesday, Sept. 14, asking them to end the local masking health order now in place. She was among several speakers during public comment to come out against the local health order on masking. | VIDEO CAPTURE
Home
COVID-19
In COVID-19Regional News

After a group expressed its opinion against local masking orders and the use of masks in general to Imperial County officials, responses from county board members ranged from firm to understanding.

Imperial Valley resident Autumn Plourd led the charge in the masking discussion, asking the Imperial County Board of Supervisors to end what she called an excessive masking mandate, during the public comment portion of its meeting on Tuesday, Sept. 14,

“Certainly, any loss of life is a tragedy, but the reality is that there are more effects from these orders than COVID, and none of them were vocally considered,” she said.

Specifically, she said, masking mandates affect mental health, increasing anxiety in children and adults, and increasing the suicide rate. There are also impacts to the business community, she added.

“Many of these businesses are hanging on by a thread since the forced lockdowns of 2020, and they feel stranded by their elected officials,” she said.

Plourd pleaded with the board to find alternative solutions to mask mandates that wouldn’t harm the community.

Four people spoke against the mask and vaccine mandates before the supervisors took their turn to speak.

District 4 Supervisor Ryan Kelley said he does believe it’s a personal choice, and he doesn’t support mass mandates, but a mandate for public health is different. He added he does believe there is more to the conversation than what is being implemented, and he does feel it’s people’s personal responsibility to wear masks.

“I started my law enforcement career back in 1969, and never in those 50 years have I seen something so tragic as this pandemic,” he said. “… and my decision, it’s impacting my family as well. I have grandkids in elementary school and in college, and they all complain to me about this mask mandate, and I tell them it’s necessary, unfortunately.”

District 1 Supervisor Jesus Escobar said the board is there to protect all, and in Imperial County that’s 180,000-plus people.

“If I could wave a magic wand and we would be together like we were after 9/11, I would,” he said. “But unfortunately, we’re not. And a lot of stuff that is driving us apart will continue to drive us apart if we don’t make that choice not to let it drive us apart.”

Chairman of the Board Michael Kelley finished board member comments, thanking the people for their input.

“COVID-19 is not a joke,” he said. “It’s very serious. All you have to do is turn the TV on to see what’s happened across the nation. Our main concern is you, your family, your children, your parent’s health, safety, and life. And that’s basically why we made the decision we did. And we want to do whatever we can for the best interest of every resident of Imperial County.”

Board member comments led into the weekly COVID-19 update, where Imperial County Public Health Director Janette Angulo said there are 28,478 positive cases for Imperial County and 751 deaths as of Tuesday, Sept. 14. The case rate is 16 new cases per 100,000 residents and the numbers have been declining over the past several days, she added.

The reason the trend is declining is due to the vigilance and wonderful work of the residents of the county, Public Health Officer Dr. Stephen Munday said.

“We really want to continue urging anyone who’s eligible to continue to get vaccinated,” he said. “It’s really nice to come and sit before you and just let you know we are going in the right direction. And that’s despite the fact that we just had the Labor Day holiday and we’re watching the numbers from that.”

For hospitalizations, Pioneers Memorial Healthcare District was reporting 13 COVID-positive patients admitted on Wednesday, Sept. 15. El Centro Regional Medical Center has not been providing dedicated daily census reporting like Pioneers, but there 27 total COVID positive patients between the two hospitals as of Sept. 14. The cumulative data on the county’s COVID dashboard appears to be from Sept. 8.

As for the county’s weekly variant report, the Delta virus numbers as of Monday, Sept. 13, climbed to 209 cases discovered through gene sequencing, the first time that yardstick has passed 200. The Gamma variant, which had led up until the past two weeks, was at 147 cases detected.