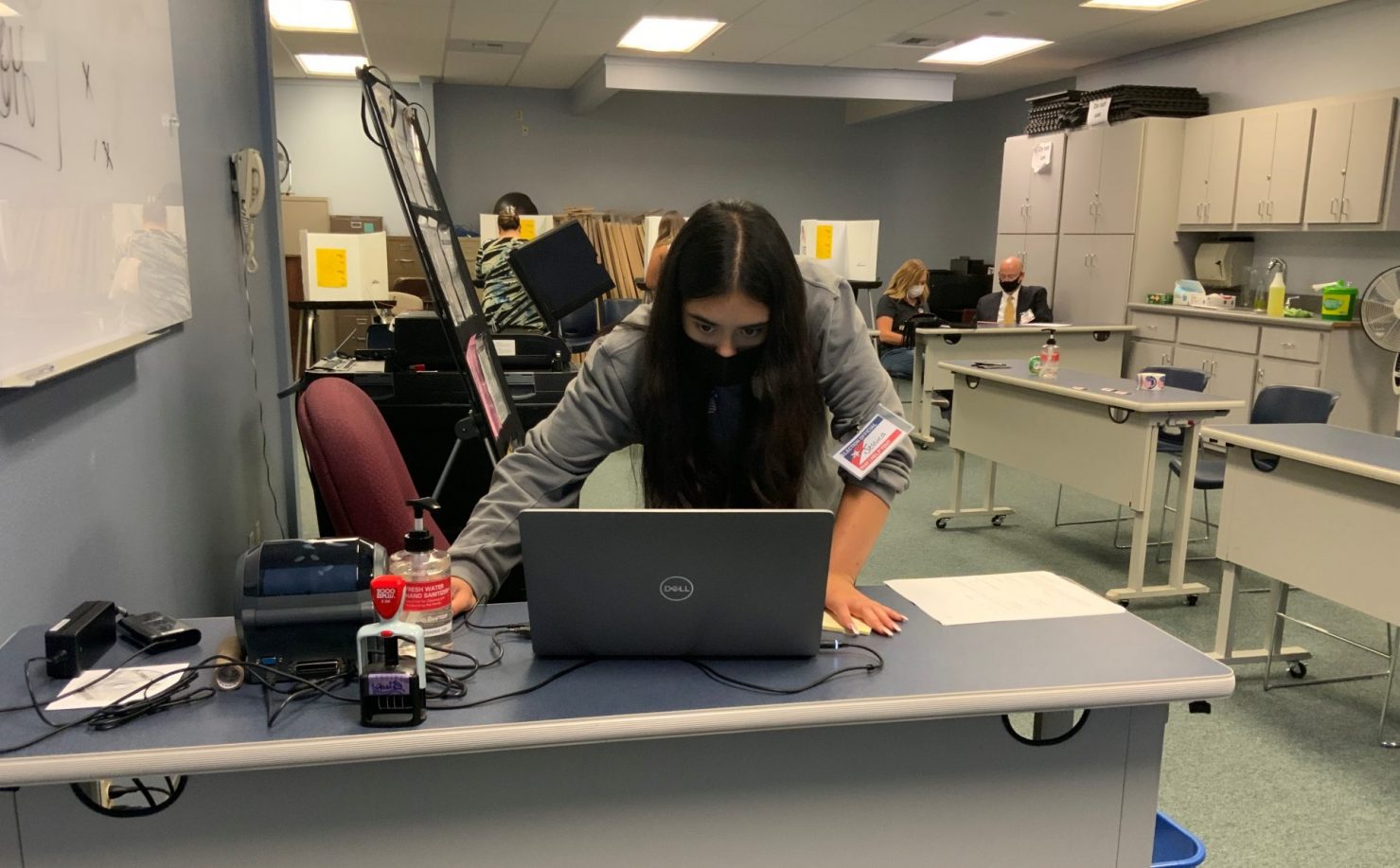 Jessica Morales, an Imperial County poll worker, updates records on provisional ballots that are given to anyone who didn't bring their ballot with them to vote on Tuesday, Sept. 14. | MARCIE LANDEROS PHOTO
Home
Election Coverage
In Election CoverageFeatured StoriesRegional News

California’s governor continues on — and as the state goes, Imperial County goes.

Gov. Gavin Newsom survived a historic recall election Tuesday, Sept. 14, and in the early showing, more than 61.3 percent of Imperial County ballots cast so far opted to keep him.

With an estimated two-thirds of ballots counted statewide, the “no” response to the question of whether to recall Newsom was ahead by a 30-point margin, according to the Associated Press. That lead was built on votes mostly cast by mail and in advance of Tuesday’s in-person voting.

“‘No’ is not the only thing that was expressed tonight,” Newsom said in his victory speech Tuesday night. “I want to focus on what we said ‘yes’ to as a state: We said yes to science, we said yes to vaccines, we said yes to ending this pandemic.”

A total of 8,830 ballots cast by Imperial County voters were against recalling Newsom. However, only 16.32 percent of Imperial Valley registered voters cast ballots during this election of the more than 88,500 eligible, and most of those were absentee and vote-by-mail ballots. Only 718 voted non-absentee on election day.

One of those mail-in voters was Alysa Teran of El Centro. She works at Kennedy Gardens Elementary School in Calexico as an independent studies teacher.

Teran voted no on the recall, citing support for the mask mandate, particularly as a teacher.

“For me, this recall, I just feel like it’s very stressful and unnecessary,” she said. “As a teacher, we just want someone … We just want to stay with Gov. Newsom. We want someone who is here for the kids and knows what we’re going through.

“I know this whole issue is about the pandemic and COVID and masks, and all this stuff,” she continued. “At the end of the day, we’re trying to protect our children. We’re trying to help them to get a good education. It’s been a very hard two years, almost, so that’s why we’re thinking that this recall shouldn’t really happen.”

Enriqueta Hutchinson, 73, of El Centro also voted “no” to the recall, and said she believes Newsom is doing a good job.

Scarlett and Adam Guizar both brought in their ballots that they received by mail to the Veterans Memorial Hall polling precinct in Imperial. The couple voted yes to recall, favoring Larry Elder.

Scarlett doesn’t like the mask mandate and is very upset about mandatory vaccines.

“I don’t like breathing carbon monoxide, you know?” she said. “We used to isolate the sick, not the healthy. And I have asthma, so it’s hard for me to breathe with this on. I think it will do more harm than good in the long run for us.”

“I am glad we are doing this,” he said. “I am not happy with his behavior.”

Calexicans Have Until Aug. 31 to Refine Plan

“His conservative views, and he seems to have a plan. He’s very focused on it,” Adams said.

Elder received the most votes should Newsom be recalled. He received 3,754 votes, or 46.44 percent of the vote in Imperial County.

Statewide, Elder led a field more than 40 printed and official write-in candidates at 46.9 percent. The nearest contender was Democrat Kevin Paffrath at 9.8 percent. For local voters, their No. 2 choice was Democrat Brandon M. Ross at 8.3 percent.

“Let’s be gracious in defeat,” Elder, the fiery talk conservative talk radio host, said on Tuesday night. “We may have lost the battle, but we are going to win the war.”

The recall has forced Democrats to focus on issues such as homelessness and California’s high cost of living, Elder added.

See How Other Counties Voted

Newsom for months had compared recall to efforts to same kind of Republican plot by former President Donald Trump and his supporters to overturn the presidential election and a push in Republican-led states to restrict voting access, according to the Associated Press.

“Democracy is not a football, you don’t throw it around. It’s more like — I don’t know — an antique vase,” Newsom said after his win. “You can drop it, smash it into a million different pieces — and that’s what we’re capable of doing if we don’t stand up to meet the moment and push back.”

Newsom became the second governor in U.S. history to defeat a recall, according to the Associated Press. Republican Wisconsin Gov. Scott Walker survived a recall in 2012.

It was not immediately available by publication how many ballots are left to be counted. There will be an untold number of provisional and mail-in ballots left to be accounted for, as there is every election. And ballots, under changes in the last the past few years, can be counted for up to week after they are received so long as they have a Sept. 14 postmark.

Previous
Imperial County Brings On Consultant to ‘Mine’ Lithium