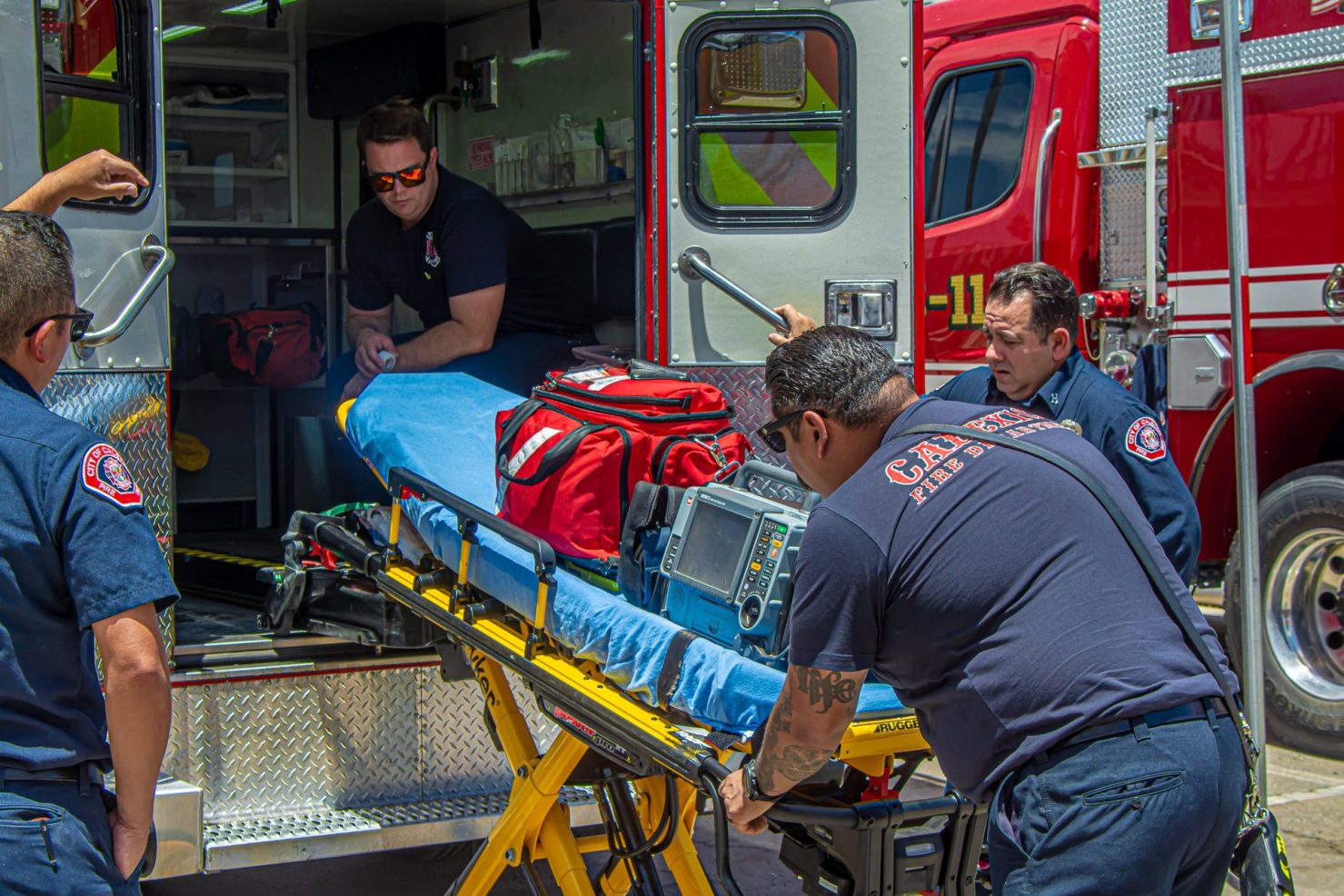 Calexico Fire Department paramedics and firefighters practice loading a gurney into the department’s new ambulance, Unit 2675, as part of a training session on June 8. The department was told recently that part of $1.2 million in American Rescue Plan Act funds will be used for two new ambulances and three fire support vehicles. Some $604,000 in vehicle upgrades to going to the Police Department. | CAMILO GARCIA JR. PHOTO
Home
Public Safety
In Public SafetyRegional News

CALEXICO — For all their high-tech and life-saving capabilities, it may seem odd to refer to an ambulance as a morale booster.

But that is just how Calexico Fire Chief Diego Favila viewed the department’s anticipated acquisition of a pair of ambulances and three fire support vehicles.

“When your equipment is new, you as an individual can’t help but feel good,” Favila said on Thursday, Sept. 16. “It makes you proud.”

His remarks came in response to the city administration’s proposal to replace some of the city’s fleet of aging public safety vehicles by using about $1.2 million of the $4.7 million in federal funds Calexico was recently allocated.

The proposal was presented as an informational item but was scheduled to return before the council for a vote in October.

Should the council approve the proposed expenditure of ARPA funds, the Fire Department would be in line to acquire two $187,000 ambulances, as well as three $100,000 fire utility vehicles.

The fire support vehicles are used to transport firehose, equipment, staff, an emergency travel trailer as well as a specialized equipment to respond to hazardous material incidents, Favila said.

The new ambulances would be especially welcome for a department that has been experiencing issues with its existing two ambulances, both of which recently broke down and required the overhaul of one and the request of a loaner.

“The ARPA funds are coming at the right time,” Favila said.

The new police patrol vehicles would replace existing models that date back to 2012, and which have proven costly to maintain because of their relatively old age, Police Chief Gonzalo Gerardo said on Thursday.

In the absence of the currently available ARPA funds, the Police Department would not have been able to acquire new patrol vehicles because of revenue losses that the city has sustained from the COVID-19 pandemic, Gerardo said.

The new patrol vehicles will replace 80 percent of the department’s fleet and are expected to save on gas costs as well, because of the newer technology that they are equipped with.

“Our carbon footprint will not be as bad as it would be with the old vehicles,” Gerardo said.

The city’s existing $4.7 million ARPA allocation represents just half of its total $9.5 million allocation, with the second installment due in July 2022, city officials said.

American Rescue Plan Act funds are distributed nationwide by the U.S. Treasury Department for the specific purpose of helping cities mitigate the negative impacts of the pandemic. The funds can be used for public health and safety initiatives, personnel, and administrative costs, to offset revenue losses as well as infrastructure upgrades.

The monies need to be obligated by Dec. 31, 2024 and spent by Dec. 31, 2026. Any of the city’s unobligated and unspent monies will revert to the Treasury Department, officials said.

Should the city incur any expense that is not eligible to receive ARPA funds, the city’s general fund would have to make up that money.

“As a result of our current fiscal conditions in Calexico, it’s imperative that we do our due diligence on the administration side to recommend projects to this city council that are 100 percent identified as eligible uses of the money,” City Manager Figueroa told the council during its meeting.

The city’s proposal to upgrade its public safety fleet represents its initial use of its available ARPA funds. As supportive as members of the City Council were upon hearing of the city’s proposal, some suggested additional uses as well.

Some of those suggestions included expanded broadband internet access, as well as water and sewer upgrades.

The city’s administration alluded to potentially using the ARPA funds for a stipend for the essential workers who helped keep the city operational throughout the pandemic, and to cover revenue losses that stemmed from the significant reduction in cross-border commerce and revenue.

Additionally, the city’s recreation and library services could see an infusion of funds to help maintain and bolster existing programs and resources.

“We may not use it as much as others do,” Figueroa said. “But if there is one thing that we realize is that we have a vast sector in our community, that does depend on those services.”

Previous
Highway 115 Closed in Holtville on Friday and Monday