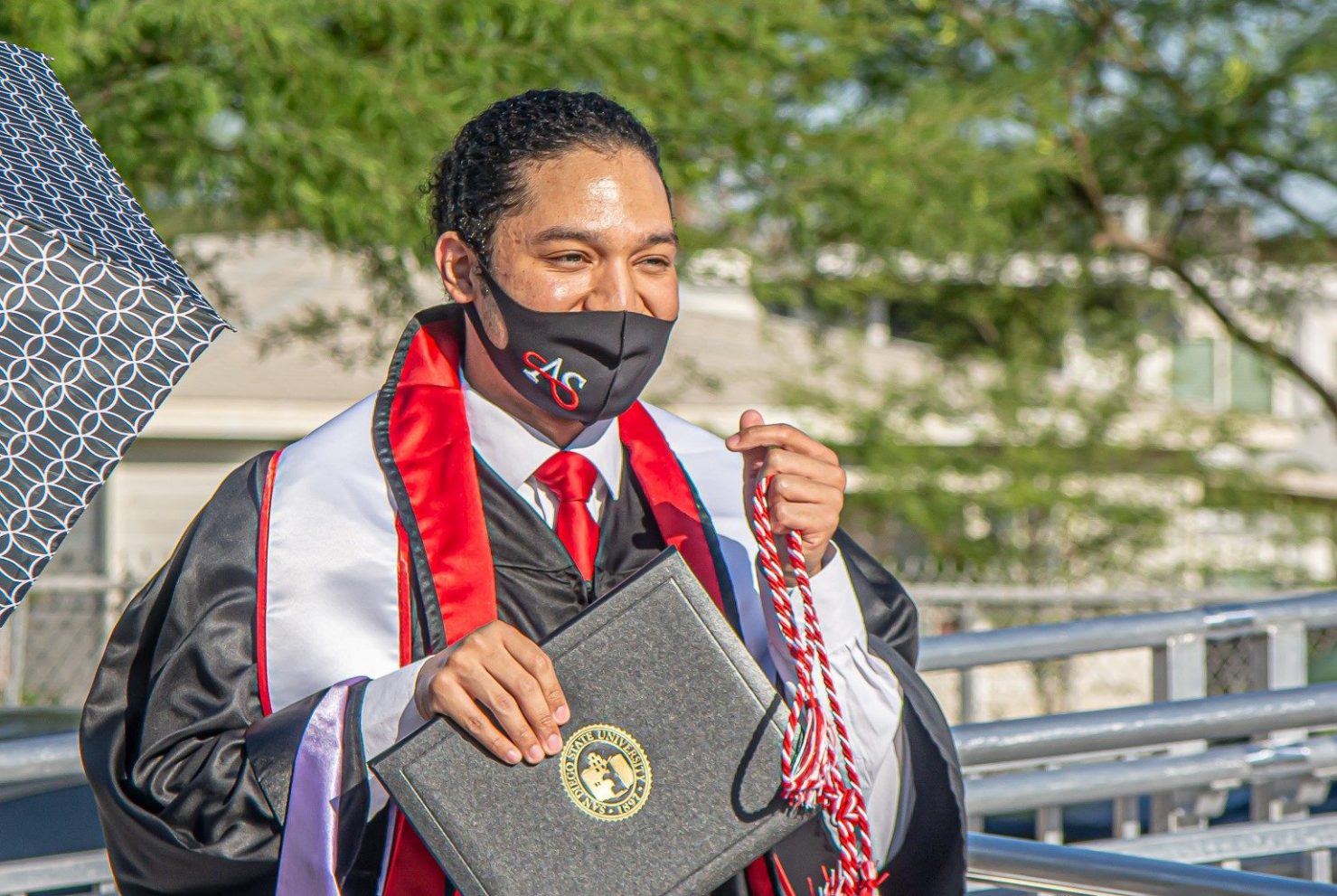 “I love to juggle,” Hardrick said in a press release.

Keep those words from Hardrick in mind while reading about his time at SDSU-IV, how he got involved in his community, and how he earned a 2021 CSU Trustees’ Award for Outstanding Achievement to help continue his studies.

Student government, LGBTQIA+ mental health, broadband access for underserved communities, disaster relief, volunteer work for the disadvantaged: Hardrick immersed himself in all of the above while pursuing a double major and a minor.

Now he’s in San Diego going for a master’s degree in post-secondary educational leadership at the College of Education with a goal of “helping people find community” or to build it in places where it does not yet exist.

Hardrick is the first student from SDSU-Imperial Valley to be given the award, said Henry Villegas, dean of student affairs for SDSU-IV.

“Lawson is an amazing young man,” Villegas said in a press release. “He is one of those exceptional students who may have not had the easiest route to a higher education but through his hard work, learning to navigate education spaces and commitment to his goals not only completed his undergraduate degree but also committed himself to the service of students responding to the call through his leadership.”

Influenced by personal experience of transferring from community college to a university, Hardrick would like to wind up in the field of student affairs “where I can have an impact on students,” he said, possibly back in the Imperial Valley where “resources for students (are) just so scarce.”

“There’s just a lot of inflation happening with regards to tuition and fees,” Hardrick stated in the release. “It’s a huge barrier for people to even think about pursuing higher education, especially at a four-year university.”

And it makes the community college even more important as a first step toward lifting those barriers, he said.

“To get that bachelor’s degree and maybe even go further, would be the ultimate goal that I always try to motivate students for,” Hardrick added.

The award recipients, announced Monday, Sept. 13, were honored Tuesday, Sept. 14, during an online meeting of the California State University Board of Trustees’ Committee on Institutional Advancement. The scholarships are awarded each September to California State University students, one from each campus, who demonstrate superior academic performance, personal accomplishments, and community service.

Hardrick’s award carries an $8,000 scholarship, supported by an endowment from the late trustee emeritus Murray L. Galinson and the Jewish Community Foundation. The graduate student said it provides not only welcome financial security in the move into San Diego’s high rent, but an unexpected social benefit from networking with the other awardees.

In his first weeks in SDSU, Hardrick has been working with assistant professor Marissa Vasquez’s SEMILLAS Research Team, helping analyze data on experiences of transfer students participating in a research fellowship program. Vasquez appointed him managing editor of a journal for community-college scholars, citing his “incredible work ethic and keen attention to detail.”

“Lawson’s naturally welcoming disposition allows him to connect easily with others, while his own life journey allows him to demonstrate authentic compassion,” Vasquez wrote in a letter of recommendation.

Hardrick grew up in Calexico. With a Black father, a Latina mother and identifying as queer, he felt like an outsider, often bullied, and left out of group activities. But the negative experiences had a positive impact. Without them, he said, “I probably wouldn’t have understood why inclusion is so important and why it’s so important for people to feel like they are a part of something.”

Hardrick entered Imperial Valley College after high school with no initial career path in mind. A decision to take a leap and continue at Southwestern College in Chula Vista sparked an interest in getting involved in student government. Then he headed back home to Imperial Valley, taking college more seriously with additional responsibilities outside of the classroom.

As president of Associated Students in 2020-21, he pushed to give the Imperial County students voting representation in the University Senate, the delegate assembly at SDSU that sets educational policy and advises the president. He also established a student organization to provide assistance to family shelters and other nonprofits serving the disadvantaged.

“Through his leadership and courage,” Villegas stated, “Lawson played an important role in advocating for bringing students much needed and demanded resources supporting their health and wellbeing, engagement, leadership development and identity development ensuring SDSU Imperial Valley students have equitable access to programs, services and facilities.”

He represented the American Red Cross at disaster scenes, supplying instant debit cards to families in distress, and became a board member at the county’s LGBT Resource Center to work on mental health issues. He joined the Young Leaders Advisory Council of California Forward, an economic advocacy group, and helped write its 2020 “Call to Action: An Intergenerational Approach to a Sustainable Future.”

In San Diego, he got involved in Associated Students’ Graduate Student Association as vice president of social change, which also gives him a seat on the University Senate Committee on Diversity, Equity and Inclusion. He is working two and prospectively three jobs.

“Taking off one hat and putting on the other one, and then going back and forth, it’s been interesting because I love to juggle,” Hardrick said. “It’s been a very good learning experience so far.”

Next
Highway 115 Closed in Holtville on Friday and Monday