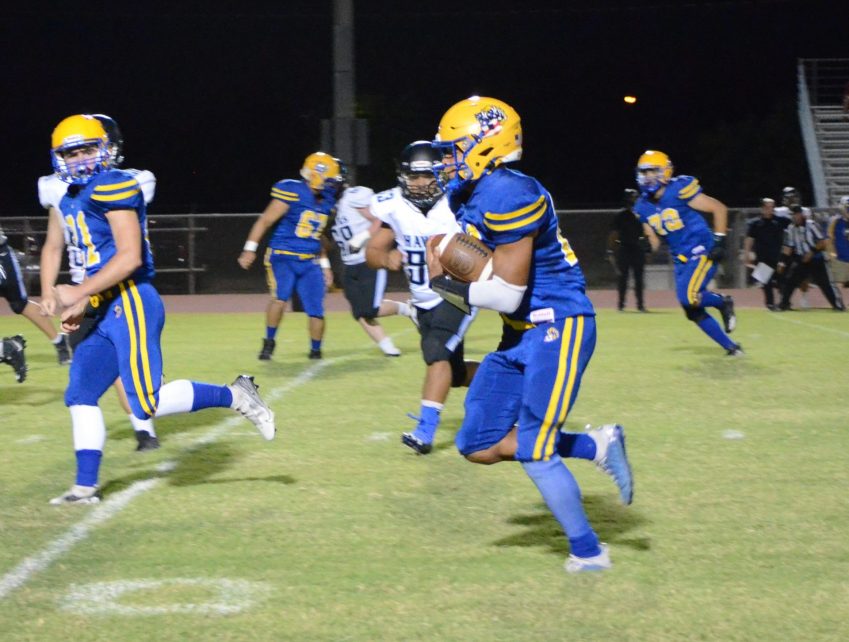 BRAWLEY — The Brawley Union High football team didn’t waste any time disposing on Gila Ridge of Yuma, jumping out to a 49-0 halftime lead and cruising in for the 49-13 nonleague victory at Warne Field in Brawley on Saturday, Sept. 18.

Junior quarterback Ethan Gutierrez led the way for the Wildcats (3-2 overall) with 149 yards passing and two touchdowns, plus he added a third score on the ground. Brawley took advantage of numerous Gila Ridge mistakes to put easy points on the board in the first half.

The Wildcats have now won three straight after dropping their first two games of the season.

Up next for Brawley is a nonleague home matchup with Fallbrook, with kickoff set for 7 p.m. Friday, Sept. 24, at Warne Field in Brawley.

Central Drops to 1-4 With Home Loss

EL CENTRO — Central Union High fell to 1-4 on the season with a 45-28 nonleague loss to Christian High of El Cajon at Cal Jones Field here on Friday, Sept. 17.

The Patriots broke open a close game in the second half to secure the victory.

The four-time defending Imperial Valley League champion Spartans now have two weeks to prepare for the IVL opener, which is scheduled for 7 p.m. Oct. 1 at Ward Field in Calexico.

SPRING VALLEY — Imperial evened its record at 2-2 on the season with a 31-0 shutout victory over Monte Vista here on Friday, Sept. 17.

The Tigers will be one of the few Imperial Valley teams in action on Friday, Sept. 24, when they travel to Yuma to take on Gila Ridge. Most of the teams in the Imperial Valley have elected to take the week as a bye week to prepare for the opening of the various league schedules on Oct. 1.

SOLANA BEACH — Santa Fe Christian got off to a fast start and never looked back, beating Southwest 56-0 in a nonleague game here on Friday, Sept. 17.

Santa Fe Christian got 28 first-quarter points and 14 in the second quarter to take a commanding 42-0 lead into the halftime locker room. It is the second ugly loss for Southwest (2-3 overall) in two weeks, having lost 75-6 to University City of San Diego back on Sept. 3.

Southwest has no game this week, giving the Eagles two weeks to prepare for their IVL opener, which is set for 7 p.m. Oct. 1 as they host Brawley Union High.

CARLSBAD — Calipatria made the trek to Carlsbad and fell to the Army-Navy Academy, 42-22, here on Friday, Sept. 17.

The loss drops the Hornets to 1-2 on the season and ends their win streak at one game. Calipatria defeated Saint Jeanne de Lestonnac Catholic School of Temecula, 26-0, on Saturday, Sept. 11.

The Hornets will be back in action at 7 p.m. Friday, Sept. 24, traveling to take on Clairemont in San Diego.

(This story was updated on Monday, Sept. 20, with the addition of Brawley Union High’s score from Saturday night, Sept. 18.)