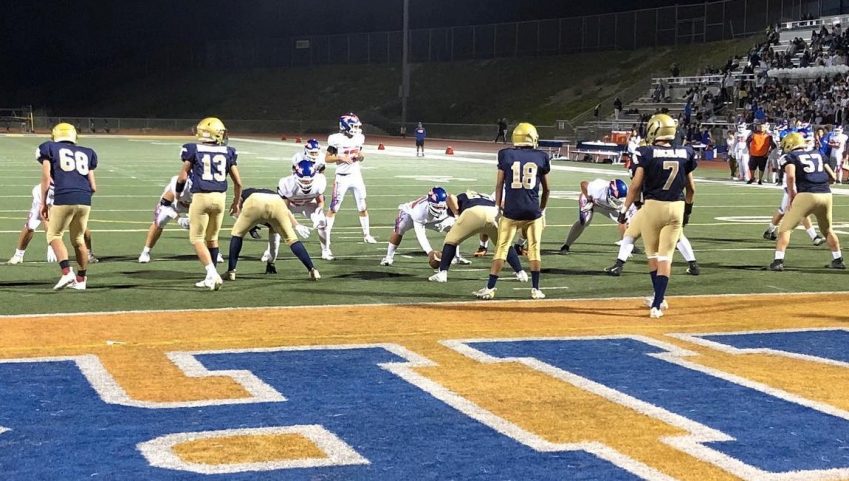 The Clairemont Chieftains line up against the Vincent Memorial Catholic Scots of Calexico in their nonleague game in San Diego on Friday night, Sept. 17. The Scots would rout the Chieftains, 35-6. | PHOTO COURTESY OF CLAIREMENT HIGH SCHOOL’S FACEBOOK PAGE
Home
Sports
In Sports

SAN DIEGO — Back on Sept. 10, Vincent Memorial Catholic High’s football team allowed Castle Park to get the game’s first points before taking over and getting a 33-13 victory in Chula Vista.

Seven days later, the Scots traveled back to San Diego County to take on  Clairemont and once again, they let the opponents score first before taking control of the game and scoring a 35-6 victory.

This time, the early score wasn’t minutes into the game, it was on the opening kickoff.

Ultimately, that would be the only score the Chieftains (0-5) would get as the Scots (3-2) scored five unanswered touchdowns, en route to the lopsided win.

Vincent Memorial’s quarterbacks coach Hector Robinson said there is still work left to be done in order to not play from behind.

“We still have to practice; we started very slow,” Robinson said.

Robinson said the come-from-behind scoring is not only on the offense, but the entire team.

“It’s not just the offense because the first play of the game was the kickoff return,” Robinson said. “It’s more about the players stepping up and getting the first hit of the game.”

Scots’ sophomore quarterback Jacobo Elias threw for 135 yards and added another 64 on the ground, totaling 199 yards of offense. He had four touchdowns against the Chieftans, three through the air and one on the ground.

However, Elias threw two interceptions deep in the team’s own redzone in a span of five minutes. The defense stepped up as the Chieftains were stopped at the 1-yard line on fourth-and-goal following the first pick. After the second interception, the Scots stopped the Chieftains’ offense once again with another turnover on downs at the 13-yard line.

Robinson said the coaches such as Manuel Padilla, the team’s defensive coordinator, get a lot of credit for keeping the Chieftans out of the end zone.

“I’ll thank the defensive coaches,” Robinson said. “They did their jobs.”

Following the Scots defensive halts in the red zone, Elias got going as he found junior wide receiver Armando Apodaca for a 52-yard pass, which set up a 25-yard touchdown to junior wide receiver Max Ascolani for the team’s first score midway through the second quarter.

Just before halftime, Jacobo ran in his lone touchdown from 11 yards out to give the Scots a 14-6 lead going into the locker room.

Despite Clairemont successfully completing both of its onside kicks – after the opening touchdown and to open the third quarter – it would not be enough as the Chieftins were unable to get into the red zone the entire second half.

Vincent Memorial’s scoring would continue after halftime as Elias would scramble on third-and-15, which led to a 20-yard score to junior wide receiver Andre Rodriguez. It would be his first of two touchdowns with Rodriguez’s second score coming late in the fourth quarter to ice the game.

Rodriguez caught his second touchdown in the front, right portion of the end zone, despite being in double coverage, for a 25-yard score on second-and-goal after a couple of penalties pushed the Scots back to the 25-yard-line.

On top of Elias controlling the offense, he successfully completed all five of his extra-point attempts.

Up next, the Scots will have two weeks plus an extra day to prepare for its Desert League opener against Mountain Empire of Pine Valley at Southwest High in El Centro (the Scots home field since they don’t have a field on campus) set for a 6:30 p.m. kickoff on Saturday, Oct. 2.

“We have the same mentality and we have got to practice,” Robinson said. “We have to take advantage of our bye week. It’s very useful for our players and coaching staff to prepare for league and let the players rest this week from the Friday Night Lights.”