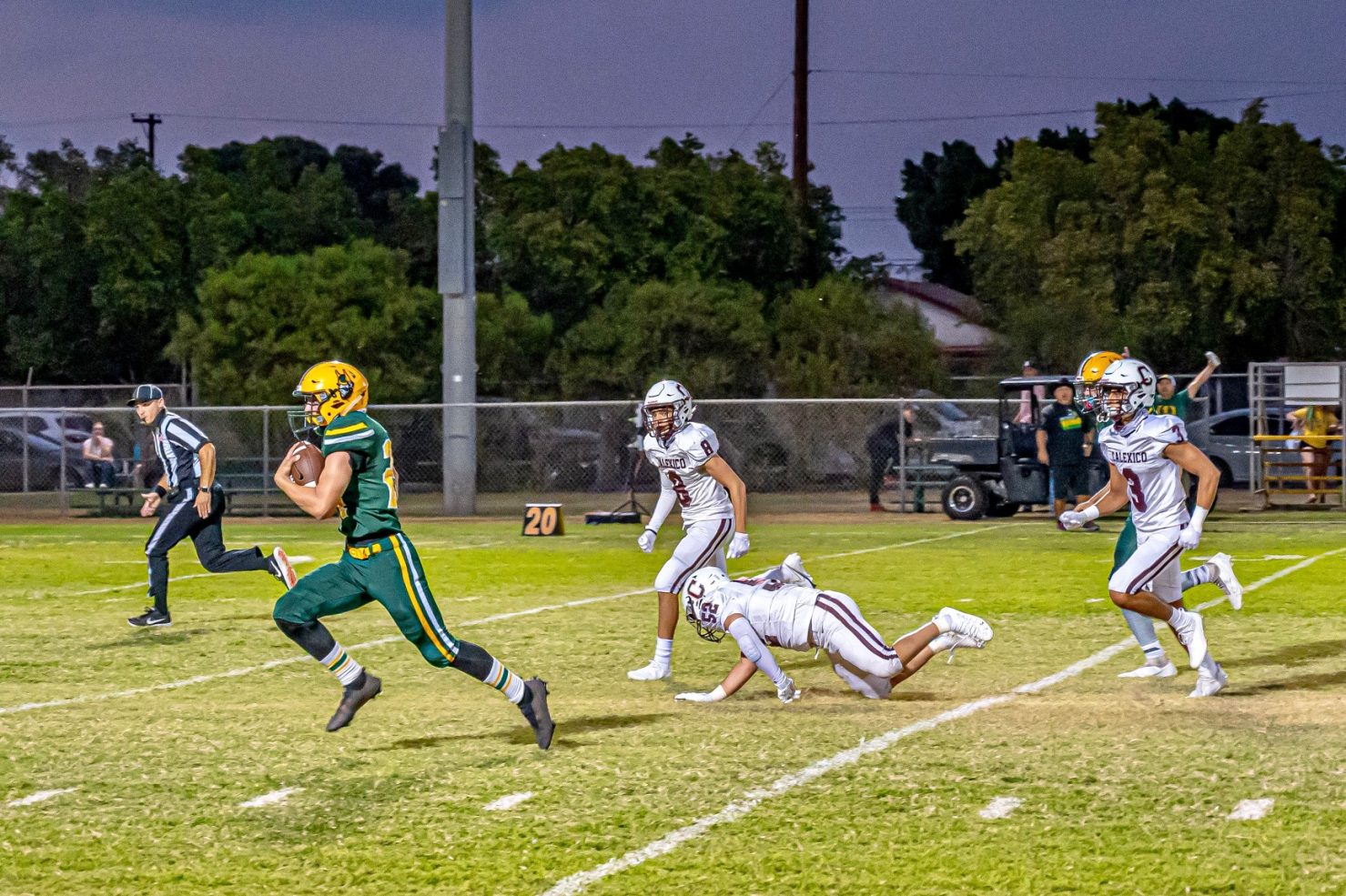 Holtville High School sophomore running back Seth Iten sprints for a 48-yard touchdown run during the first quarter of the Vikings’ 29-28 victory over Calexico at Birger Field in Holtville on Friday, Sept. 17. | CAMILO GARCIA JR. PHOTO
Home
Sports
In Sports

HOLTVILLE — Using a ground-and-pound offense, the Holtville High School football team kept its record perfect, holding on to defeat Calexico, 29-28, in a nonleague game at Birger Field here on Friday, Sept. 17.It was a matchup between two top-five team according to CIF-San Diego Section Division V, as the undefeated Vikings came into the game ranked No. 3, while the Bulldogs entered as the fifth-ranked team in the division.

Both teams delivered big plays on offense and defense, but it was a 16-play, second half touchdown drive for Holtville (5-0 overall) that was the defining moment of the game.

After stopping the Bulldogs on downs deep in Holtville territory, the Vikings took the ball at their own 6-yard line with 6:22 left in the third quarter and proceeded to march 94 yards in 16 plays, finishing the drive with a 21-yard touchdown pass from senior quarterback Spencer Hilfiker to senior tight end Mason Toten.

The Vikings took more than seven minutes off the clock and led 22-12 with 11:27 left in the fourth quarter after the time-consuming drive.

“I told the guys when we got in the huddle to ‘strap on the seat belts’ because we were going on a drive,” said the 18-year-old Hilfiker. “Our offensive line was doing a great job and we were able to keep pounding away at them.”

Holtville coach Jason Turner said his coaching staff talked at halftime about putting together a drive like that.

“We needed to put one together like that where we just small-ball it the whole way,” said Turner, the Vikings’ fifth-year head coach. “That kept our defense off the field and kept their defense on the field and wore them down.”

Holtville increased its lead later in the fourth quarter when Hilfiker scored on a four-yard run with 7:14 left in the game. Bryan Padilla booted the extra point and the Vikings had a 29-12 lead and seemed to be in control.

Down by 17, the Bulldogs (3-2 overall) got their passing game going on the arm of junior quarterback David Esquer. With 6:16 to go, Esquer hit senior Pedro Cruz on a 51-yard touchdown pass, then junior Troy Marin ran in the two-point conversion to pull Calexico closer at 29-20.

The Bulldogs’ defense was able to force a Vikings’ punt with 2:45 left in the game, leading to another Esquer-to-Cruz touchdown pass. This score came on a 30-yard pass to cap an eight-play, 66-yard drive with the two-point conversion run from sophomore Andres Castro pulling Calexico to within a point at 29-28 with 59 seconds left.

“We knew it was going to be a battle coming in here tonight,” said Cruz, who had the two touchdown catches for 81 yards. “The second touchdown I got the cornerback off balance and was able to go up and catch the ball.”

The touchdown set up the Bulldogs to attempt an onsides kick, but on the attempt, the ball bounced into the hands of Holtville’s Roger Rolfe. From there Hilfiker took two kneel-downs to run off the final minute.

“We have tried to impart that mindset to the kids of being physical and never giving up and they fought until the end tonight,” said second-year Calexico coach Fernando Solano. “We are starting to clean up our mistakes and limit our turnovers, but we have to do that for four quarters.”

Both teams seemed to match each other punch for punch in the first half. Holtville scored first on the second play of the game when sophomore Seth Iten had a 48-yard touchdown run. Daniel Ledesma ran in the two-point conversion to put the Vikings up 8-0 with 11:11 left in the opening quarter.

Calexico answered with a 13-play, 80-yard drive that culminated in an Ernie Sanchez four-yard touchdown run. The extra-point kick was blocked leaving the score at 8-6 with 2:58 left in the first quarter.

Sanchez would lead all rushers on the evening, finishing with 105 yards on 16 carries.

It didn’t take long for Holtville to answer, as senior Payton Iten finished a five-play, 53-yard drive with a three-yard touchdown run. Ledesma ran in the two-point conversion and the Vikings were up 16-6 with a minute left in the opening period.

The Bulldogs answered with another 80-yard touchdown drive, this time needing just eight plays with senior Abram Zazueta going the final 23 yards for the touchdown. The two-point conversion failed, leaving the score 16-12 with 8:36 left in the half.

“We learned tonight that we can’t get greedy,” Turner said. “We have to focus on the 10 yards between the chains and control the clock.”

Both the Bulldogs and Vikings have bye weeks coming up, leaving two weeks to prepare for big games for both teams.

The Vikings return to Birger Field in Holtville at 7 p.m. on Thursday, Sept. 30, for the Imperial Valley Classic rivalry game against Imperial.

Previous
No Special Ed Director a Concern for Brawley Mom