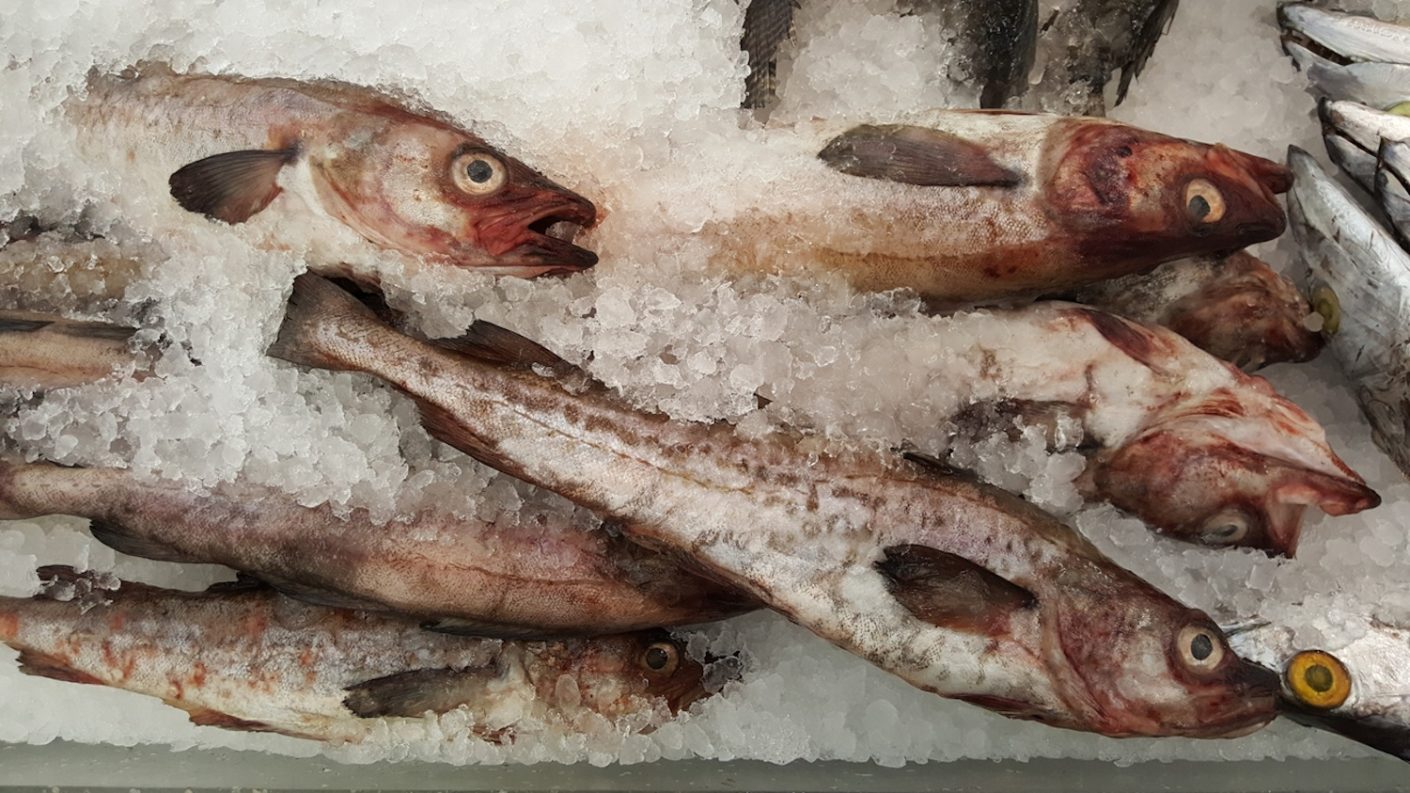 Millions of Pounds of Pollock and a Railroad to Nowhere

How a Strange Dispute Over Maritime Law May Leave Tons of U.S.-bound Fish Stranded Abroad

The fate of millions of pounds of seafood destined for U.S. grocery stores, restaurants, food banks, and schools is hanging in the balance right now.

At least that’s what Inge Andreassen, president of Seattle-based American Seafoods, one of the world’s biggest harvesting companies, recently warned amid an ongoing battle with the federal government over a century-old maritime law. The fight involves tons of seafood piling up in cold-storage facilities and a 100-feet long railroad that goes nowhere. And if it drags on, it stands to create bottlenecks along a supply chain that has already seen numerous disruptions during the pandemic.

Let’s start from the beginning: In mid-August, U.S. Customs and Border Protection (CBP) began issuing fines to two of American Seafoods’ shipping and logistics subsidiary companies—Alaska Reefer Management and Kloosterboer International Forwarding—over alleged violations of the Merchant Marine Act of 1920. CBP alleges that since 2012, the companies have been evading the law’s requirements by arranging to send seafood on a comically brief round-trip journey on a tiny Canadian railroad to nowhere.

More commonly known as the Jones Act, the law requires that any ship carrying merchandise between two points of the country be built, owned, and staffed by U.S. citizens. It also has to be U.S.-flagged, meaning that it operates under American laws. Businesses and opponents of the Jones Act have long argued that these requirements are burdensome and challenging to meet: Not only is the United States a minor player in the global ship manufacturing industry, but U.S.-flagged ships are also typically more expensive to operate due to higher crew and maintenance costs.

The Jones Act is the law that requires any ship carrying merchandise between two points of the country be built, owned, and staffed by U.S. citizens.

However, the Jones Act includes a handful of exemptions, including one called the “Third Proviso.” Under this carveout, the Jones Act does not apply to routes that take place “in part over Canadian rail lines and connecting water facilities,” so long as the routes are recognized by the federal agency that oversees rail transportation.

American Seafoods insists that its shipping routes meet the requirements of the Third Proviso exemption. CBP disagrees, and last month, the agency began slapping fines onto American Seafoods, its logistics and transportation subsidiary companies, and its various partners and customers for alleged violations of the Jones Act dating back five years. Cumulatively, those fines total approximately $350 million, according to American Seafoods. (We’ve reached out to American Seafoods’ counsel for comment and will update this article if they respond.)

Rather than cough up the funds, the company in early September filed a lawsuit against the federal government arguing that CBP had “blindsided” the company and that the penalties CBP had levied were “unconstitutionally excessive.”

First, here’s what both parties agree on: Between 2006 and 2012, American Seafoods and its subsidiaries transported products via a long and winding journey from Alaska to Maine using foreign-flagged ships. The vessels departed from Dutch Harbor, Alaska, voyaged down to Central America, crossed the Panama Canal, then sailed back up to the Canadian town of Bayside, New Brunswick. Once in Canada, the shipments then traveled a short distance via the New Brunswick Southern Railway, before they were transferred onto a truck that brought them across the border.

In early September, American Seafoods filed a lawsuit against the federal government arguing that CBP had “blindsided” the company and that the penalties CBP had levied were “unconstitutionally excessive.”

In a court filing, CBP acknowledges these details and takes no issue with them. “All was good,” the agency wrote in a court filing last week, until 2012, when American Seafoods stopped using the New Brunswick Southern Railway and instead began to use one called the “Bayside Canadian Railway.”

The marine part of the journey—from Alaska, through the canal, up to Canada—remained unchanged under the new arrangement. However, once the seafood was brought to shore in Bayside, something fishy happened: According to American Seafoods, a third-party partner would transfer the shipments onto trucks, load those trucks onto railway cars, and then pull said railway cars along the length of the Bayside Canadian Railway track—and back. The trucks would then get unloaded exactly where they started and drive down to the United States.

In a court hearing on Friday, American Seafoods’ counsel said that the Bayside Canadian Railway helped shave a train journey measuring almost 100 miles long to one less than 100 feet long. The company also claims that many other suppliers use this cost- and time-saving arrangement.

Watch the railway in action below:

CBP’s position is that putting seafood shipments on a brief round-trip journey via a railroad to nowhere does not meet the requirements of the Third Proviso exemption. Instead, the agency said that American Seafoods’ shipments that begin in Alaska and end up in Maine must take place on U.S. vessels, no matter the global circuit they take through Canada and non-U.S. waters in the Pacific and Atlantic Oceans in the process.

“Upon information and belief, the [Bayside Canadian Railway] was constructed and operated for the sole purpose to attempt to evade the requirements of the Jones Act,” the agency wrote in a court filing last week. (We’ve reached out to CBP for comment and will update if they respond.)

American Seafoods doesn’t dispute how the Bayside Canadian Railway works, but insists that CBP has long known about the arrangement and that its recent fines are indicative of an abrupt change in policy that violates due process. It filed a motion for a preliminary injunction to prevent CBP from enforcing the penalties, or imposing new ones, until the litigation is over.

“We have this basic law: You have to transport between points in the United States with U.S. ships if it goes by water, and then we have this exception.”

It’s a convoluted story, but the fundamental issue at the core of the dispute is rather simple, said Charlie Papavizas, an attorney who sent CBP a tip about the arrangement in 2017, setting off this entire legal fracas.

“We have this basic law: You have to transport between points in the United States with U.S. ships if it goes by water, and then we have this exception,” said Papavizas, a maritime lawyer for Washington, D.C. law firm Winston and Strawn. “[CBP’s] allegation is [that the Bayside Canadian Railway route] doesn’t really fit within the exception.”

So what happens now? According to American Seafoods’ president, without relief from CBP’s penalties, millions of pounds of the company’s product will remain stranded along various points of the supply chain.

In a declaration to the court, Andreassen estimated over 11 million pounds of seafood is currently stuck in cold-storage facilities in Canada, with 13 million pounds en route to the same location, and 10 million in cold storage in Alaska. As space runs out in storage, Andreassen said that the company expects to divert products to Europe instead. This could jeopardize its U.S. customers downstream; the company says its products are sold to retailers like Walmart and Costco, fast-food chains like Arby’s and Burger King, and even the federal government itself via the Department of Agriculture’s food bank and school lunch purchasing programs.

A hearing on the company’s motion is currently taking place. We’ll update this post as we learn more.

The post Millions of pounds of pollock and a railroad to nowhere: How a strange dispute over maritime law may leave tons of U.S.-bound fish stranded abroad appeared first on The Counter.

Next
Partisan Policing: Calling Riverside County Sheriff Chad Bianco a ‘Danger,’ a New PAC Hopes to Unseat Him in the Next Election