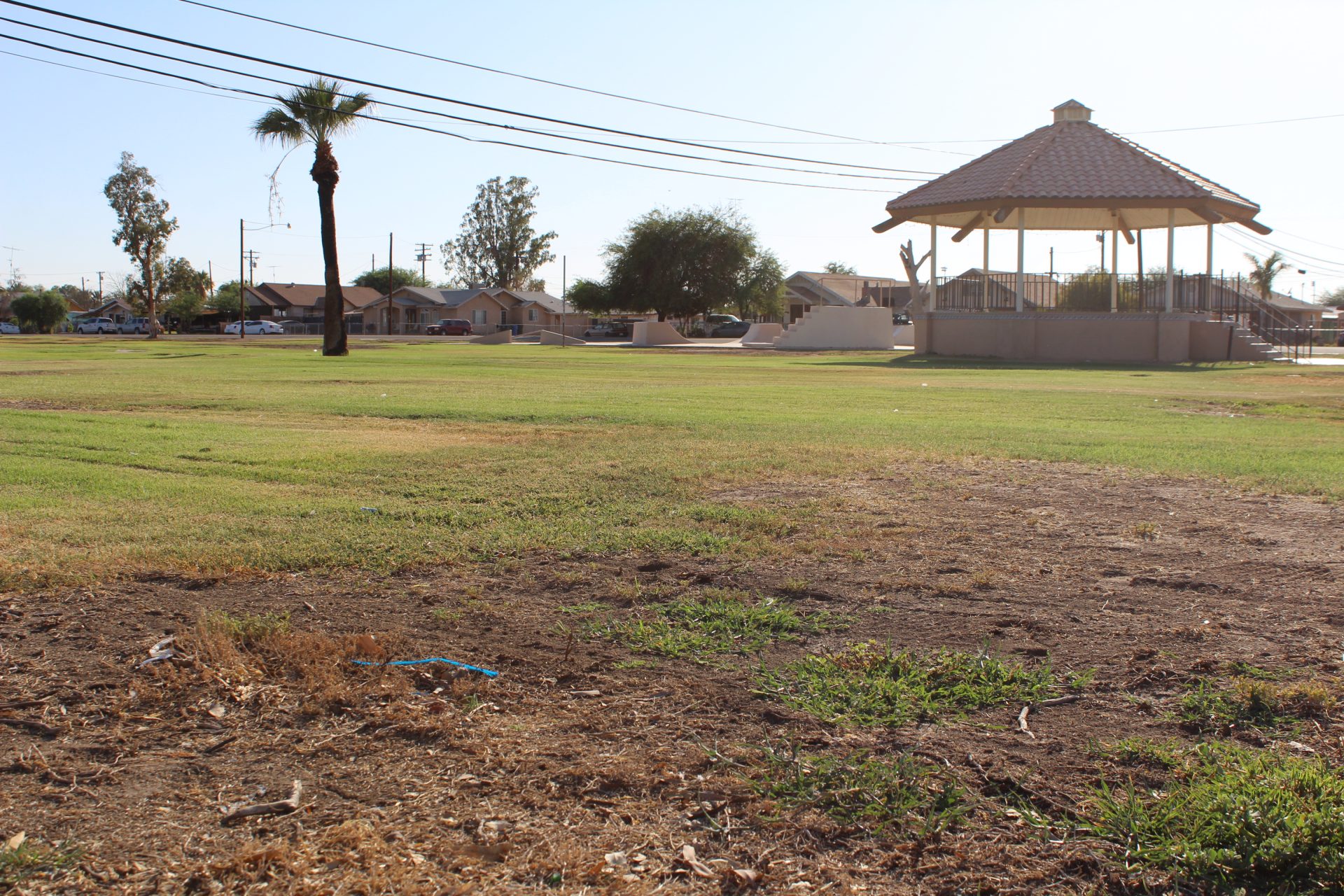 Calipatria's park looks a bit brown at the moment and could get even browner now that Golden State Water Co. is set to have voluntary water rationing in the north end. | KATHERINE RAMOS PHOTO
In Regional News

CALIPATRIA — On Sept. 3, Calipatria resident Frank Chavez received an email from Golden State Water Co., the private firm that distributes water to Calipatria and Niland, warning that mandatory water conservation and rationing plans are to be put into effect due continued drought conditions in California.

Chavez was stunned but not fully surprised. Changes and rising water prices through Golden State Water Co. have been the norm for Calipatria and other areas of the north end for years, he said.

“It makes you really think about what you value. Do you value your lawn, the trees you have had for years, and that’s a tough one to take,” Chavez said. “It’s going to be interesting how the community takes it as a whole.”

Already in Stage 1 of the private company’s contingency plan that encourages “voluntary conservation” of water usage by 15 percent, stages 2 through 6 come with more extreme measures and added costs that some believe Imperial County residents should not have to deal with considering how and from whom the Valley gets its water.

Golden State Water Co. is based in San Dimas, and mostly provides water to areas outside Imperial County, including Apple Valley, Rancho Cordova, Barstow, Bay Point, Norwalk, and other locales in Orange, Los Angeles, Riverside and Santa Barbara counties, among other areas.

Calipatria and Niland both fall under Golden State Water Co.’s Region 3 along with the cities of Apple Valley, Barstow, Morongo Valley, and Wrightwood.

All of the areas served by Golden State are under some form of drought management plans, except Calipatria and Niland, where both get their raw water from the Imperial Irrigation District, which has the largest historical allotment of water from the Colorado River. In the case of most of Imperial County, water service is usually provided by municipalities, special districts, or county water systems.

Golden State is the only private purveyor in the region.

“If we are placed on this water rationing, that would mean we would have less water going to our parks, which already have less water because of the pay rate scale,” Calipatria City Manager Romualdo “Rom” Medina told this newspaper earlier this week. “It’s evident around the city that lawns are not watered and are no longer green. It’s been a challenge maintaining vegetation, especially in the summer heat.”

There’s also the added issue that many Calipatria and Niland residents are on the low end of an already low economic scale in Imperial County.

Under Golden State, Stage 2 is the placement of mandatory water conservation of 20 percent reduction based on 2020 water usage by month and will include a $2.50 surcharge per centum cubic feet (CcF) over allocation. Customers will not be asked to reduce below eight CcF, or 5,984 gallons a month.

Golden State Water Co.’s contingency also has the potential to increase to Stage 3, 4, 5, and 6 emergency conservation mandates. This could include a mandatory water usage reduction of up 55 percent and a surcharge as high as a $15 per CcF over allocation.

“People are already low income in this town and it’s going to hurt them financially,” said one Calipatria resident who asked their name not be used. “Golden State ups their rates I think every year for the last five years, so I think it’s going to do a lot of damage because people can’t afford it.”

On Tuesday, Sept. 21, the Imperial County Board of Supervisors approved sending out two letters on behalf of its residents, one to Golden State Water Co. and one to the California Public Utilities Commission to request Calipatria and Niland be taken off the list of counties that have to ration water and a lowering of the water rates.

The letter states that the Calipatria area is already under Disadvantaged Community classification, and to impose water-use violation fines would put this already at-risk community under unnecessary financial stress.

Golden State Water Co. representatives could not be reached as of publication of this story.

Calipatria City Council member Maria Nava-Froelich echoed the sentiment of the county board and area residents. She said the city is already in poverty and that the water prices are driving it further down. She also reiterated that the city has already been dry and losing its green plants.

Some houses don’t have grass at all and are just dirt lawns, she said.

Nava was grateful the county board for wanting to help, but she feels that Golden State is going to continue walking all over the city.

“Golden State is like a dinosaur and we’re the little people,” Nava said on Monday, Sept. 20. “So they take advantage of us … Golden State has just continued and we’ve tried to fight them. A lot of injustice is happening in the north end, and if Calipat is hurting, than you know Niland is hurting.”

The Calipatria City Council will meet on Tuesday, Sept. 28, to draft its own letter to Golden State Water Co. requesting to be taken off the water rationing contingency.

This is par for the course over the past few years, Medina explained.

Residents let the vegetation around their homes die for fear of driving their water prices higher. Medina said this is the same issue that the city has with watering its parks, leaving them dry with dying grass and encroaching dirt.

Despite the emails and mailers, some area residents said they did not realize water rationing is on the horizon, but they still know and feel the pinch of the high water rates.

One resident, who also did not give a name, questioned why Calipatria and Niland, some of the smallest cities in the Valley, should have to be the ones to have to ration when there are bigger cities that use more water.

“Why should we be the first one to feel the rations when there are more likely candidates farther up river?” said the resident.

Stage 1 conservation is not ideal but manageable, Medina said, but that could easily change to Stage 2 if a drought declaration by Golden State.

Customers are already encouraged to limit outdoor irrigation to three days per week between the hours of 7 p.m. and 8 a.m.

Golden State raised the prices of the water in 2012 to go along with the state mandates to conserve and has continued to raise them as the drought continued, Medina said. This drove many around the city to begin self-imposed water rationing, actions that continue to this day.

Medina stated the other cities under Region 3 have to rely on aqueducts or reservoirs to get their water and would be subject to drought conditions, but that is not the case for the raw water that Golden State buys, treats and resells from IID.

IID has not imposed any form of water rationing, making the northend the only part of the county to be doing so. Medina added that the other cities are also considered more affluent in comparison to Calipatria and Niland, he said.

Luckily for residents like Chavez, winter is on the way and there won’t be as much of a need to water the plants. However, he is sure things are about to get interesting for the citizens of the north end and choices are going to be made.