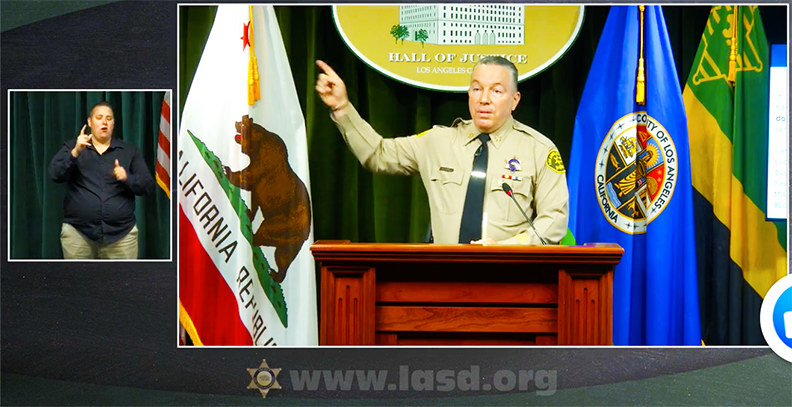 On Wednesday morning, Sheriff Alex Villanueva held a press conference in order to respond to the RAND Corporation’s long-awaited report released earlier this month in which the RAND researchers studied and analyzed the deputy subgroups — known by many as deputy gangs — that have plagued the Los Angeles County Sheriff’s Department for a half century.

At the beginning of his press conference, the sheriff sounded upbeat, as he announced that he and his administration had already accomplished all the key recommendations that the RAND people listed.

After that, the sheriff proceeded to slam the report, which was commissioned by the LA County Board of Supervisors, who are pretty much fed up with the deputy gang issue,

“They were not interested in the truth,” said the sheriff of the authors of the 230-page report (which WLA wrote about here, and which you can read for yourself here).

Deputy gangs or subgroups, according to Villanueva’s Wednesday analysis, are a “problem of perception but not reality.”

As for the members of the so-called deputy gangs, or sub groups, or deputy cliques, such as those affiliated with the Banditos of the department’s East LA station, the Grim Reapers originally out of the Lennox station, and the Executioners who are associated with the LASD’s Compton station, Sheriff Villanueva had this to say:

“They’re a glorified bunch of people who go to the river on the weekend and party. That’s all they are.”

Never mind that the actions of some of these harmless river partiers have triggered major lawsuits, and a seemingly limitless string of high ticket legal settlements that LA County taxpayers wind up paying.

(On that topic, for your reading pleasure, below you’ll find a downloadable version of the latest draft of the legal complaint written by Attorney Vincent Miller, who represents a list of LASD deputies in their civil lawsuit. The complaint, as you’ll see, lays out disturbing detail allegations of assaults, threats, intimidation” and more inflicted on the plaintiffs by members of the Banditos deputy clique.)

The sheriff’s broad dismissal of the RAND report, however, was one of many verbal mud pies Villanueva tossed at county officials and others on Wednesday.

He also took potshots at the legal opinion rendered recently by LA County Counsel regarding the legal parameters that should and should not govern efforts to curb deputy cliques or gangs. On Wednesday, citing no details, the sheriff deemed the opinion, “laughable.”

(WitnessLA will have more on County Council’s opinion and a second relevant legal opinion regarding deputy gangs at another time.)

Also there’s the matter of the subpoena.

Subpoenas, Weaponized Investigations, and a Motion

Wednesday’s slam-the-RAND-report press conference came at a time when tension between Sheriff Villanueva, and those tasked with oversight of the LA County Sheriff’s Department, was already ratcheting up.

One of the biggest causes of ratcheting tension occurred last month when the LASD’s Civilian Oversight Commission (COC), subpoenaed Sheriff Villanueva in order to ensure his presence at the Commission’s monthly meeting on Thursday, September 23, in order to discuss some topics the commission members considered pressing.

But after being served with a subpoena on August 26, 2021, on September 9, the sheriff wrote to the Commission’s executive director, Bryan K. Williams, to say that he will not, in fact, be attending the Commission’s September 23 meeting, virtually or otherwise He’s very busy, Villanueva said, or words to that effect.

One of the primary issues the COC commissioners wanted to discuss with the head of the nation’s largest sheriff’s department at Thursday’s meeting, was his habit of launching criminal investigations against oversight officials he appears to be believe may have done him wrong.

Last July, WitnessLA wrote about the sheriff’s pattern of using the threat of criminal investigations as cudgel against those he deems have treated him unfairly, especially if those on his bad list are engaged in some kind of oversight of the LASD.

This same issue was documented in a ten-page report by COC Commissioner Sean Kennedy, who described in detail how, for more than two years, Sheriff Villanueva, with the help from certain members of his administration, had been targeting oversight officials and other “perceived political adversaries,”  with what seem to be specious criminal investigations that never result in actual charges.

Now, in view of the sheriff’s refusal to show up to respond to questions about these ongoing weaponized criminal probes — some directed at members of the COC themselves, and against the Max Huntsman, the LA County Inspector General — at Thursday’s meeting the commissioners will vote on a motion that, if passed, will direct County Council to “forward potential illegal activity by the Los Angeles County Sheriff to the California Attorney General for Investigation.”

In addition, if it is approved by the COC, the motion will direct County Council to file a petition with the Los Angeles County Superior Court for an Order to Show Cause “as to why Sheriff Villanueva should not be held in contempt for his failure to appear pursuant to a properly served subpoena.”

We’ll let you know how it goes. So….watch this space.

(This story by Celeste Fremon first appeared in WitnessLA and is being made available through the CalMatters Network.)

Previous
A Reimagining: The Children’s Discovery Museum of the Desert Will Reopen in December 2022
Next
LEGAL NOTICES: Sept. 23, 2021