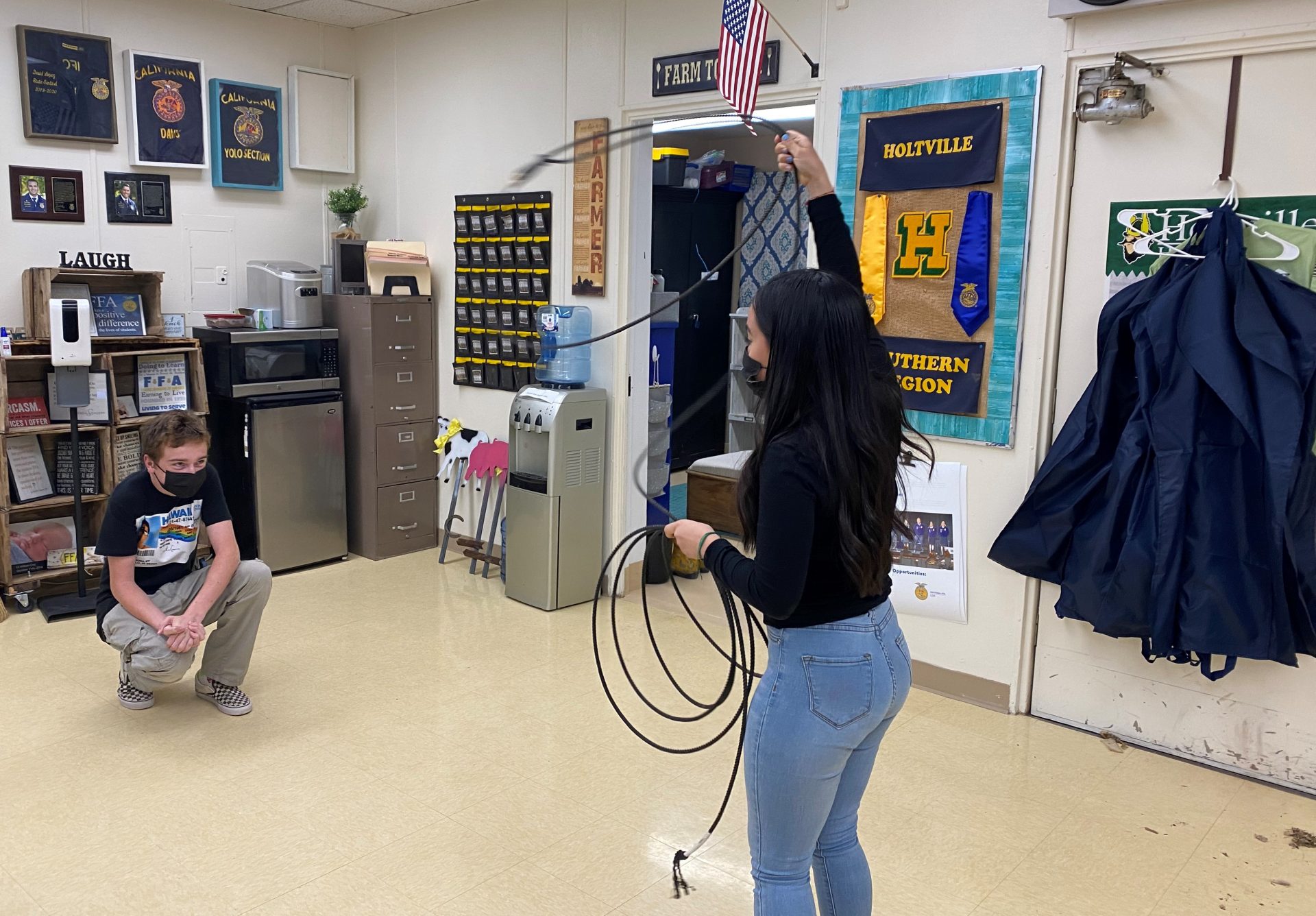 Holtville FFA President Melanie Orozco, 17, practices lassoing 15-year-old Gannon Strahm as they develop different activities they could use to engage with people who come to FFA events during class on Tuesday, Sept. 21. | MARCIE LANDEROS PHOTO
In AgricultureEducationFeatured StoriesLocal News

HOLTVILLE — Holtville’s FFA program is living up to this year’s theme, “Small Town, Big Purpose,” and is catching up on time lost due to the pandemic as the program gets ready to head east to the national convention and puts new programs in place.

“I’m really excited about being in person because it’s a different experience. FFA is not just agriculture, it’s also leadership. And a lot of the things that we do include, like public speaking and activities, where we need to interact with large groups of people,” 17-year-old senior and Holtville FFA President Melanie Orozco said.

“It’s super difficult when you’re trying to learn that, but it’s online. It really stifles the way your education works,” Melanie said during an interview on Tuesday afternoon, Sept. 21. “And I’m just so excited to come back in person, especially for, like, all our section and region activities.”

With the start of a full new year, Lindsay Cox, one of three agricultural science teachers involved with Holtville FFA, is excited about new programs being offered.

“We’re adding a Greenhand Officer team and a Discovery Officers team just to give younger members a chance to shadow some older members and in leadership roles. To see the excitement and engagement that those kids are already coming to those opportunities with, is pretty amazing,” Cox said on Tuesday. “I’m looking forward to broadening our scope working with more kids and leadership development.”

The Greenhand Officer team will be comprised of freshman FFA members, who otherwise cannot be officers because of their grade level. This gives them the chance to shadow the older officers and begin the process of learning these leadership skills necessary to take the reins later on, while older officers get to experience mentoring others.

The Discovery Officers team is an FFA group for students in middle school in Holtville. The team has been active for the last two to three years, but Cox said the team hasn’t yet had the chance to get out into the community due to pandemic restrictions.

Th Discovery Officers program gives students like David Magallon, who joined the middle school, a chance to gain leadership skills early on. Magallon is now a 15-year-old sophomore, who is a sentinel for his FFA chapter and is planning to attend the National FFA Convention and Expo at the end of October.

“I’m excited for national convention because it’s pretty much the first big thing that I’m going to be doing … and I’ve heard it’s pretty much like one of the best things that you can do and join up with.” David said.

Holtville’s FFA officers will travel to the 94th National FFA Convention and Expo in Indianapolis. Students who attend will be able to go to educational workshops and competitive events, and its gives them a chance to network with students interested in agriculture from all over the country.

“I am looking forward to is our national convention in Indiana. I have really been involved in FFA ever since I joined my sophomore year. I’m quite sad that I didn’t do my freshman year, but ever since I came in that day, I’ve always been like, I want to be involved,” 17-year-old senior and FFA Vice President Arianna Venegas said. “It’s just something that opened my eyes. It also led me to a career that I want, which is civil engineering, and I want to tie into agriculture business.”

Erika Hurtado, a 16-year-old junior who serves as FFA secretary, also found her calling in FFA, discovering she wants to be a biochemist.