Bernadette Plazola’s YouTube Channel Attracts Some 377,000 Subscribers to Her System of Learning Ukulele 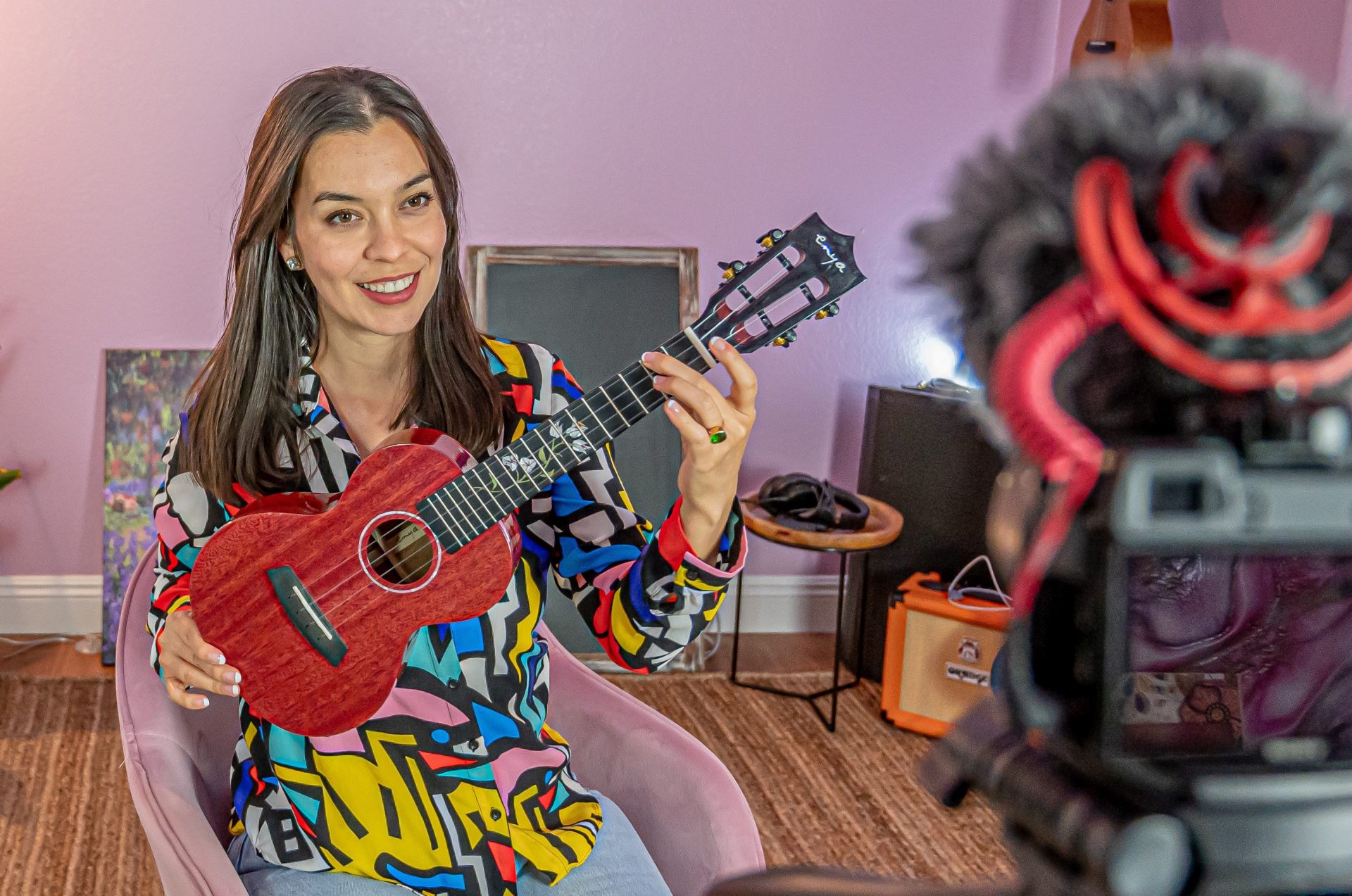 Imperial Valley resident Bernadette Plazola, of the instructional YouTube channel “Bernadette Teaches Music,” shows how she films her web content from her home outside Seeley recently. Plazola, who has 377,000 subscribers to her channel, has been teaching people to play the ukulele since 2015. | CAMILO GARCIA JR. PHOTO
Home
Featured Stories
Share

SEELEY — Calexico native Bernadette Plazola hastily uploaded a TikTok video in June 2021 and thought nothing of it. The 60-second clip turned out to be her “viral moment.”

“This is the tuning game-changer, watch …” Plazola says on the video, as she proceeds to use an automatic tuning device to wind the strings of her ukulele to pitch for her.

The TikTok now sits at 17.3 million views with 1.9 million likes. Plazola said the clip had 100,000 views in the first few hours, and 1 million views the next day.

“This job is really trying anything and everything; you don’t know what’s going to end up being viral, you don’t know what people are going to respond to. But you can’t take it personally. I found that that’s the best way to approach (this job), it’s just another seed you plant — some of them grow and some of them flop,” the 33-year-old content creator said during a recent interview from her home outside Seeley, which doubles as her pastel-hued studio.

Maybe we need to back up a bit and explain that Plazola was already a successful YouTuber when the TikTok video broke — and by successful we mean her primary YouTube channel, “Bernadette Teaches Music,” an online system of teaching people to play the ukulele that she started in 2015, has 377,000 subscribers and has amassed 35.7 million total views.

As one might have guessed (she said it herself), this is no hobby for Plazola; this is a main source of income born of taking chances, putting her education and talent to the test, and, frankly, running from complacency and expectations.

In 2014, the Central Union High School graduate had what many might consider a dream job, or at least the kind of stable position that people spend their lives trying to land — she was working as a band instructor at Frank M. Wright Middle School in Imperial.

“I was the band director there, and I had a mentor teacher say, ‘You got really lucky because this is the school district that a lot of teachers (try and wait to get into); you can retire from here,’ and I was like, ‘Oh, that’s not gonna work, I don’t want to be somewhere like that, ever,” she said. “So, I quit that year and went to Japan.”

For those who don’t know Bernadette Plazola, it might be hard to discern that her videos are locally produced: the quality is immaculate, the colors and visuals arresting, and the technique and tools seemingly plucked from some professional production company.

If not for a cast of characters of local musicians who make intermittent appearances, like Seeley Elementary band director and jazz saxophonist Quincy Cavers, who at one point was a protégé of noted jazz trumpeter, the late Clark Terry, Plazola’s local roots might go on unnoticed.

The chances of being a successful content creator is slim in the crowded space of YouTube, but Plazola has worked at it over the years and by just about every standard and benchmark, she’s a hit.

Users of YouTube reportedly upload 20 hours of content to the social media platform every minute worldwide, but the chances of being seen are dicey at best.

Most YouTube videos get fewer than 50 views; only 2 percent get 1,000 views or more, and 0.3 percent get at least 500,000 views, according to Slate magazine’s Chris Wilson, who tracked the data to determine how rare it was to become a successful content creator.

There’s certainly room for success: YouTube has 2 billion logged-in monthly users, three quarters of all U.S. adults stream video there, some 77 percent of people ages 15 to 35 use it, and 80 percent of U.S. parents say their children 11 and younger are watching.

And if you can catch on, the rewards are dizzying: the No. 1 YouTube earner in 2020 was 9-year-old Ryan Kaji, whose videos of DIY science experiments, family story time, and reviews of new toys earned him 12.2 billion views, 41.7 million subscribers, and $29.5 million — and a sweet ride on a float in the November 2020 Macy’s Thanksgiving Day parade.

Plazola is off to a pretty good start if one compares some of her stats. Her most popular YouTube video has 2.3 million views, but she has five with at least 1 million streams, and nearly 75 videos with at least 100,000 views.

After Plazola made the decision to leave Frank Wright in 2014, she followed her first husband to Japan, where the Air Force airman was stationed at Kadena Air Base in Okinawa.

Plazola stayed there for four years, where she worked part-time as a music teacher on the base. During her stay, she started and committed the rest of her free time to her YouTube channel.

Originally a baritone saxophone player, Plazola finds the ukulele a much easier instrument to play and introduce to beginners.

“I think the ukulele is an instrument that you can play on the first day, and it can make you happy,” she said.

“It’s kind of like learning a new language, like if you know the basics of learning a language, you can start to learn another one. Certain things cannot be translated, some things don’t make sense, but you can still communicate a message,” she said, and it’s the same with music.

Plazola puts a lot of thought into what she does; it’s not some off-the-cuff regimen like so much content cluttering the web — her work is intentional and draws from her background and education.

Armed with a master’s degree in education with an emphasis in curriculum and instruction, so she wanted to see if she could put what she studied to the test and she devised a 30-day ukulele challenge that only produced about 1,000 views in its first year.

“It started with the idea to teach people how to hold the instrument on Day 1, and then by Day 30, you’re playing ‘Somewhere Over the Rainbow,’” Plazola said.

Currently in the middle of her fourth 30-day challenge, the first challenge has since grown to around 200,000 views.

For every challenge, Plazola creates a hashtag like #2021UkuleleChallenege and encourages her viewers to create their own accounts dedicated to ukulele, so that they can join in on the ukulele community, and where she can catch up with her viewers’ progress and provide feedback.

Her current challenge involves teaching how to play “chord melody,” or the concept of playing both the base chords of a song and the often-single-note melody line of a piece at the same time — like accompanying oneself.

For the challenges, she records two videos in advance, and then checks to see the audience’s reception, so that she knows how to proceed — maybe the viewers need a review of the lesson, for her to go slower, or she can continue advancing the challenge.

Back in America and Moving Forward

Plazola returned to the United States several years ago, divorced and remarried, and had her first child along the way.

Since her daughter’s birth in December, it’s provided focus to her career.

“I thought I was working really hard before, but now (she’s inspired me) to be more intentional with my work,” Plazola said.

Plazola, whose Instagram and TikTok accounts bear the moniker “Plazi,” saw the explosive growth of her YouTube and social channels come with the onset of the pandemic, due to so many people being at home looking to be entertained or looking to learn a new skill.

While COVID took away one opportunity, it also opened up a whole new world to her.

In March 2020, Plazola was making arrangements with a Spanish company to be its content creator. However, COVID-19 had other plans and all international flights were cancelled. To add to that surprise, Plazola soon had to start preparing to become a mother with her now-husband, Jaime Mata.

So, Plazola continued to put out content during quarantine.

Recently, just days after being interviewed for this story, Plazola decided to let go of all brand sponsorships and focus on her own store, ukelandia.com, which appears to be a one-stop shop for her learning system, instruments and products, and even an online magazine. The site is live, but it says content to launch in October.

Prior to this, the avid collector of ukes — she has more than 40 of them — had a brand collaboration with ukulele and guitar maker, Enya Music of Houston, Texas.

“They all sound different to me now. Before I started playing ukulele, they all just sounded the same. Now that I play it every day, I can feel the difference between the strings and the wood type,” she said, adding that her favorite is one she designed for Enya meant to resemble the color of the pink bougainvillea ubiquitous to the Imperial Valley.

Plazola remains driven and she hasn’t let her influx of new subscribers and users that came with the pandemic lull her into the same kind of complacency she bolted from in 2014.

If anything, motherhood and success has made her more driven — planning new challenges, interacting with her audience on social media, potentially introducing new instruments, like the keyboard or guitar, to her followers.

“I just had the content ready to go, they say ‘luck is when opportunity meets preparation,’ so I think it was luck, but I was also prepared.”

Next
Who’s Dying in California from COVID-19?