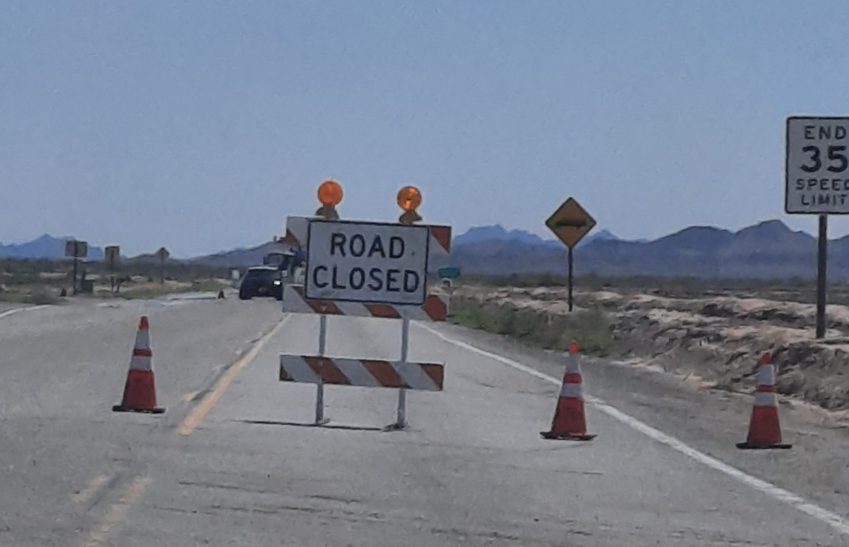 A cellphone photo from Highway 78 at Milpitas Wash in the Palo Verde area near shows the road closures following an Aug. 31 storm that killed two passengers in a vehicle carried away by storm waters. | COURTESY IMAGE
Home
Public Safety
In Public SafetyRegional News

BLYTHE — The family of a Blythe woman who went missing near Palo Verde after she and her companion were washed away by storm waters, is concerned about local authorities’ search efforts.

Specifically, the daughter of 51-year-old Graciela “Gracie” Ramirez, whose partial remains were located by authorities on Sept. 6 in Milpitas Wash near the area where her vehicle was swept off the highway on Aug. 31, expressed frustration with the time it took authorities to locate her mother’s body.

Monica Ramirez, 30, of San Bernardino, also said she is disappointed the Imperial County Sheriff’s Office did not allow family and friends to conduct their own search in the intervening days.

“It will never make sense to me,” said Ramirez, referring to the six days that lapsed before her mother’s body was found.

The elder Ramirez was traveling with her friend, Jack Andrew Wood, 61, of Blythe, on Highway 78 the afternoon of Aug. 31 when the Chevrolet HHR that Ramirez was driving was swept downstream by a strong current where the roadway traverses Milpitas Wash.

Wood’s body was subsequently discovered in an undisclosed area of the wash on Sept. 1, the Imperial County Sheriff’s Office reported on Sept. 10.

And though the Sheriff’s Office reported on Sept. 1 that a multi-agency search and rescue effort had started the night of Aug. 31 once the storm cleared, a friend of Ramirez’s family has contended that the search was minimal and did not involve as much mutual assistance as initially reported.

From what Samantha Curiel was able to observe in the days following the incident, it appeared to her that authorities were more concerned about reopening Highway 78, which had been closed temporarily between Palo Verde and Ogilby Road following the Aug. 31 storm because of storm-related damage.

“There was no kind of concern from anybody,” Curiel, of Blythe, said during a joint phone interview she and her childhood friend Monica Ramirez had with this newspaper on Monday, Sept. 20.

In contrast, the Sheriff’s Office has characterized its search effort as being “long and arduous,” and involving the deployment of multiple assets and personnel from its off-highway, boating, patrol, and investigations divisions, as well as the volunteer services of the agency’s Aero Squadron and De Anza Rescue Unit, said Chief Deputy Robert Benavidez.

Milpitas Wash is a large seasonal stream that empties into the Colorado River in northeastern Imperial County. The National Weather Service reported that the Aug. 31 storm had dumped around six inches of rain in the surrounding area. The afternoon of the storm, a witness had notified the Sheriff’s Office that they had seen two bodies emerge from a vehicle that had gotten washed off the highway at Milpitas Wash.

Aside from the deployment of various ICSO resources, the California Highway Patrol had also provided air support during the initial search on Aug. 31 after the storm had subsided. The following day, CHP air support was again requested, prompting the agency to deploy four separate flights with both CHP fixed-wing and helicopter aircraft, CHP Winterhaven station Officer Michael Mitchell said.

Initially, the county Sheriff’s Office reported being assisted by the U.S. Border Patrol and personnel from Marine Corps Air Station Yuma, as well.

In response to what she had perceived as a minimal search effort, Blythe resident and Ramirez family friend Curiel said she had contacted Border Patrol and MCAS Yuma to inquire about the agencies’ respective roles in the search effort. Representatives from both agencies told her that they did not participate, she said.

An MCAS official who was contacted by this newspaper confirmed that base personnel did not take part in the search effort. Similarly, an El Centro Sector Border Patrol agent disclosed that local personnel did not participate.

The Border Patrol agents that were on scene the night of the Aug. 31 storm and afterward were assigned to the Yuma Sector’s Border Patrol, Search, Trauma and Rescue (BORSTAR) unit, Chief Deputy Benavidez said.

Even so, family and friends of Gracie Ramirez said it was difficult to get much information from authorities regarding the search effort as it transpired.

Sheriff’s officials had first reached out to her family after initially recovering a bumper from her mother’s vehicle in the wash and before authorities had located either Wood or her mother’s bodies, Ramirez said.

At one point, Sheriff’s Office personnel contacted Monica Ramirez’s younger sister at her place of employment in Blythe to notify her that their mother was found but was refusing to help authorities locate Wood, Ramirez said.

About an hour later, authorities spoke with Ramirez’s sister again to tell her that their previous disclosure was incorrect and should not have been shared with her, Ramirez said.

Just as troubling for family and friends, Ramirez and Curiel said, was that they were advised against performing their own search in the days after their mother went missing. Friends of the family with 4×4 trucks and off-road vehicles had volunteered to help and ready to go.

“I don’t understand why we weren’t allowed to go look ourselves,” Curiel said. “They knew what would happen leaving her out there as long as they did.”

By the time authorities did locate Gracie Ramirez’s body, her lower extremities had been scavenged by wildlife, Monica Ramirez said.

As it was, the county Sheriff’s Office had encountered a number of challenging and unsafe conditions during its search, Chief Benavidez said.

The desert region’s desolate terrain, extreme weather conditions, prevalence of wildlife, as well as the still-flowing wash that presented dangerous and muddy conditions for vehicles and pedestrians in the days following the storm, all contributed to a difficult scene that officials felt was best left to law enforcement.

“Mainly it was due to community safety and the fact that law enforcement had a number of authorities on hand at all times conducting a thorough and calculated search,” Benavidez said.

Nonetheless, Benavidez encouraged the family of Gracie Ramirez to reach out to the Sheriff’s Office with any specific questions they may have, or to get clarification about how the case was handled.

“We understand this is a difficult time for the family and offer our sincere condolences,” he said.

Next
What Immigration Crisis? It’s An Inequality Crisis