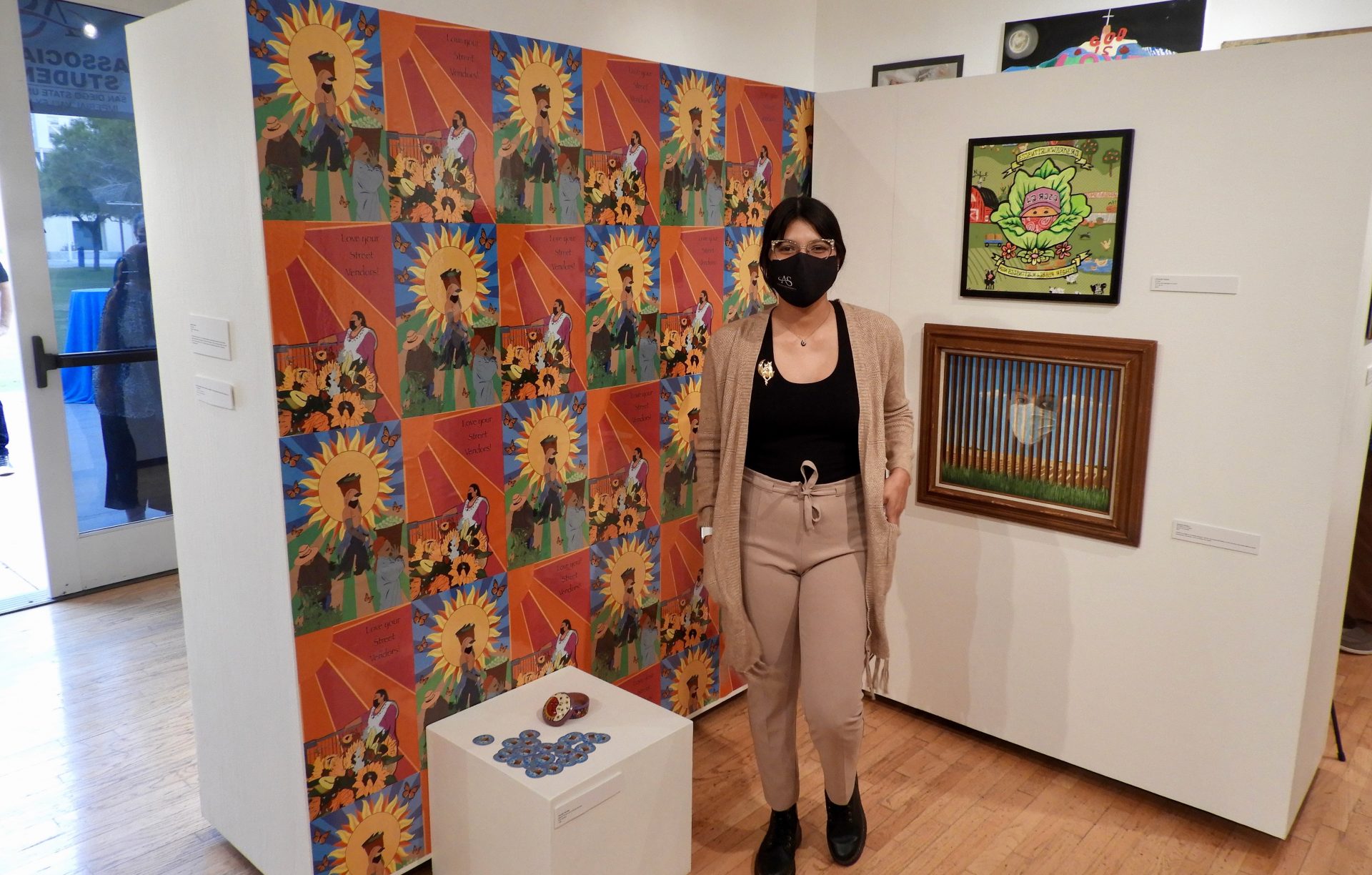 Janneth Trinidad Aguirre, 24, of Calexico stands next to her pieces, "Esenciales" and "Migrant Workers are Essential Workers" (decals on the table), during the opening reception for the exhibit, “Crisis y Cosecha,” at Steppling Art Gallery on the campus of San Diego State University-Imperial Valley in Calexico. Aguirre created the works to bring awareness to her family's struggle as migrant workers during the pandemic. | MARCIE LANDEROS PHOTO
Home
COVID-19
Share

CALEXICO — Janneth Trinidad Aguirre had never exhibited any of her artwork in a gallery exhibition, yet the themes of her debut pieces fit right in at “Crisis y Cosecha.”

“Oh my God, I am so nervous. I’ve never done anything like this before,” the the 24-year-old Calexico native said during the opening reception last week of “Crisis y Cosecha,” which translates to “Harvest of Crisis,” a study on the ways the Imperial Valley has changed over the past 18 months under the COVID-19 pandemic.

Her pieces, “Esenciales,” a “wheat-pasting” artwork adhered to a false wall, and “Migrant Workers are Essential Workers,” a set of decals handed out during the reception, were created to bring awareness to the struggles migrant workers have faced during the pandemic.

“Migrant workers are paid terribly and were some of the last to get access to COVID vaccine and (personal protective equipment) supplies, but they were still out there working,” said Aguirre, who recently entered San Diego State University-Imperial Valley campus’ teaching-credential program after graduating with a bachelor’s degree in liberal arts.

This subject was deeply personal for Aguirre because she comes from a family of migrant workers. She spoke of watching her family struggle as they continued to work through the pandemic, without any of the benefits that other essential workers saw, and that moved her to create her pieces.

Her works were part of what coincided with the reopening of SDSU-Imperial Valley’s John Steppling Art Gallery in Calexico for the first time in 18 months. The reception on Thursday, Sept. 23, was a dual celebration, anchored by the exhibit co-curated by Imperial Valley Equity and Justice Coalition and the Associated Students at SDSU-IV.

The university and the coalition also partnered with the Latino Community Foundation and Comite Civico del Valle to host “Crisis y Cosecha,” which features Imperial Valley artists and is an expansion of an online exhibit titled, “Imperial Valley Hope and Resilience.”

“There are a lot of pieces from creatives that is their first time showing at any exhibit. Our groups reflected on how it’s so important to support creatives and to support the work and really to have a platform for them to have this experience,” said Daniela Flores, co-organizer from I.V. Equity and Justice Coalition, during the reception.

One wall of the exhibit is dedicated to a single mural which won the San Diego State University Social Justice Mural Contest at SDSU’s main campus, also by artists new to the gallery space.

Painted by SDSU-IV students Alma R. Medina, Sergio Ojeda, and Samantha Ramirez, “The Struggle for a Bilingual Education” highlights the struggle bilingual students face when only being allowed to speak one language. After “Crisis y Cosecha” ends after Nov. 4, the mural will movie to SDSU-IV’s library.

One of the artists, Alma Medina, explained image, which is divided in two primary images.

“On the left side, we have a depiction of someone who is not allowed to speak freely language. We have a reference to Prop. 227, which is a proposition that enforced English only in classrooms and students that were only speaking Spanish were not allowed to get bilingual classes that they needed,” Medina said on Sept. 23.

“And on the right side, we have a girl that’s supposed to represent the positive side of that, someone who’s allowed to speak both languages freely, however, they wanted and mix them up. And that’s why we also have a reference to like, an opposite Prop. 58, which is when Prop. 227 was taken out,” she added. “And now this is something that allowed for bilingual education for our students.”

Medina was born in Mexicali but immigrated to Calexico when she was 4 years old. Her own struggles the piece, she said, recalling when schools mandated English only yet she spoke primarily Spanish.

Medina, much like Aguirre, is attending SDSU-IV’s credentialing program, though Medina’s focus is on being able to teach math in high school.

The exhibit featured artworks that were created in response to a variety of events in the last 18 months, including the 13 migrants who lost their lives outside Holtville in March, and the pre-pandemic Mexicali Resiste, a movement born of protesting efforts to build a Constellation Brands brewery in the Mexicali Valley, which was part of a larger issue of the privatization of water in the region.

“This is an exhibition that is kind of like the second part of something that we organized with the Imperial Valley Equity and Justice Coalition and the Steppling Gallery a year ago,” gallery director Luis Hernandez said during the reception. Hernandez is also an art instructor at the Calexico campus and Imperial Valley College.

“And in that time, a year ago, we organized an online exhibition. And this is kind of like the continuation now, like a physical exhibition where you can see the world in person, which is a very different experience, not just looking at images on the screen,” he said. “Now you have a chance to look at paintings and also, like, three-dimensional works, also cultural works. But again, the experience is very different (from) one year ago.”

All participating artists will receive an honorarium with funds provided by the Latino Community Foundation. Some of the artwork will be for sale by the artists. The exhibit can be seen through Nov. 4, from 6 to 8 p.m. Mondays through Fridays.

“I’m just taking it all in,” said Linda Abarbanell, associate professor of psychology at the Calexico campus, who attended the opening. “I’m glad that there’s a lot of people that showed up for this. And it’s been nice to be able to interact with some of the artists and the incredible talent that we have here in the Imperial Valley, in here on our campus as well. Perfect.”