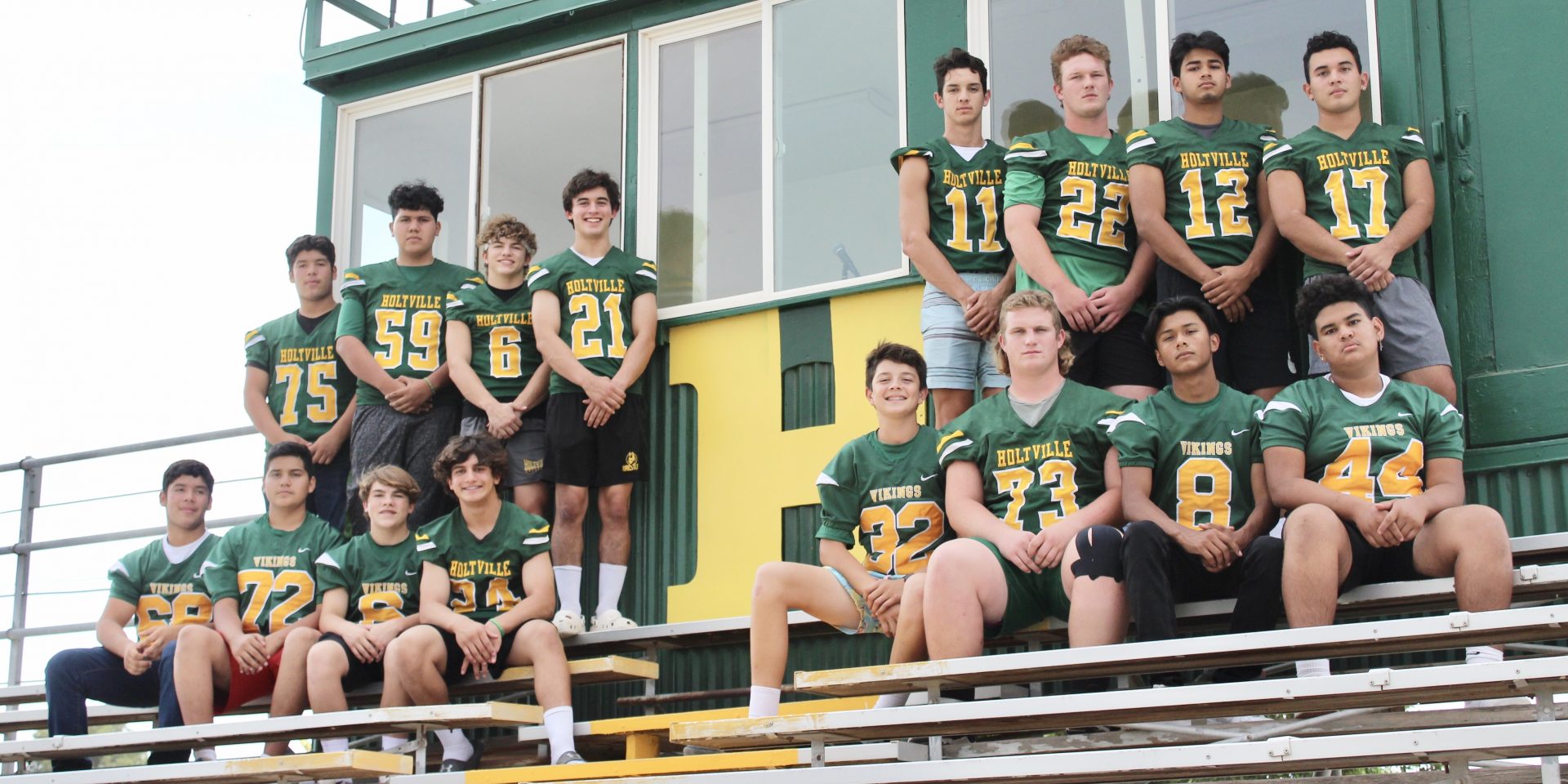 HOLTVILLE — Football players talk about their team as their “family” all the time. But in Holtville High School’s case, a majority of the team is related with eight sets of brothers dotting the roster.

Practices for the currently undefeated (5-0 overall) Vikings are like families getting together in the yard, says senior quarterback Spencer Hilfiker, who’s freshman brother Smith Hilfiker is an offensive lineman on the varsity team.

“This is literally a home away from home for us. I love coming to practice and hanging out with these guys,” said the 18-year-old Spencer, who admits he’ll be the first to blame Smith if he gets sacked this season. “I’ve been playing with most of these guys since we were little kids so we are all comfortable with each other.”

If addition to the Hilfikers, the Vikings’ varsity offense has a pair of brothers in the backfield with senior running back Payton Iten and sophomore back Seth Iten who have accounted for 11 of Holtville’s touchdowns this season. Payton, who was Desert League Offensive MVP during the COVID-shortened season in March, has eight touchdowns while his younger brother has three.

“I have seen these kids grow up. I’ve been coaching most of them since they were 5 or 6 years old,” said Jason Turner, Holtville’s fifth-year head coach. “This is what defines Holtville. Passing it on to the next generation is what our town has always been about.”

Junior running back Zephan Duarte said having his brother Sebastian, a sophomore on the junior varsity, in the program with him makes life a little easier.

“He’s going through the same tough practices I am so he knows how I feel when we get home,” said the 16-year-old Zephan. “It’s a lot of fun being on the team with this many brothers, it makes practices a lot more fun.”

Among the eight sets of brothers are twins Abraham and Aaron Lezama. Both split time between the junior varsity and the varsity and both come from a boxing background.

“Those are tough kids. They’ve been through a lot so nothing really fazes them at practice or in games,” Turner said. “They are going to be monsters as they get more experience.”

Senior tight end Mason Toten has seven receptions and six touchdowns this season, setting an example for his younger brother Maddox Toten, a sophomore playing the same position on the junior varsity team.

“It’s great to be out here together and playing football at the same time with him,” Mason said. “I’ve been playing with these guys all my life. We’re all family out here.”

Turner said practices run a bit smoother when one of the brothers gets disciplined, because it makes the other brother pay closer attention.

Senior Gabriel Panalez is a starter on defense for the Vikings while his brother Enrique Panalez is freshman on the junior varisty team. Senior Omar Cortez and sophomore Eric Cortez are also both part of the 79 players Turner has in the program.

Senior linebacker Donovan Johnston has welcomed his freshman brother Dion to the program, something Dion said he was looking forward to for a long time.

“We’ve talked about that for a long time that we would have this year to be in high school together,” said the 14-year-old Dion. “Here in football or wrestling we are gonna help each other out and be there for each other.”

Freshman Smith Hilfiker said being in the huddle and watching his brother Spencer captain the Vikings has been a great time to this point in the season.

Previous
IN PICTURES: Acura Grand Prix of Long Beach 2021 is a Wrap