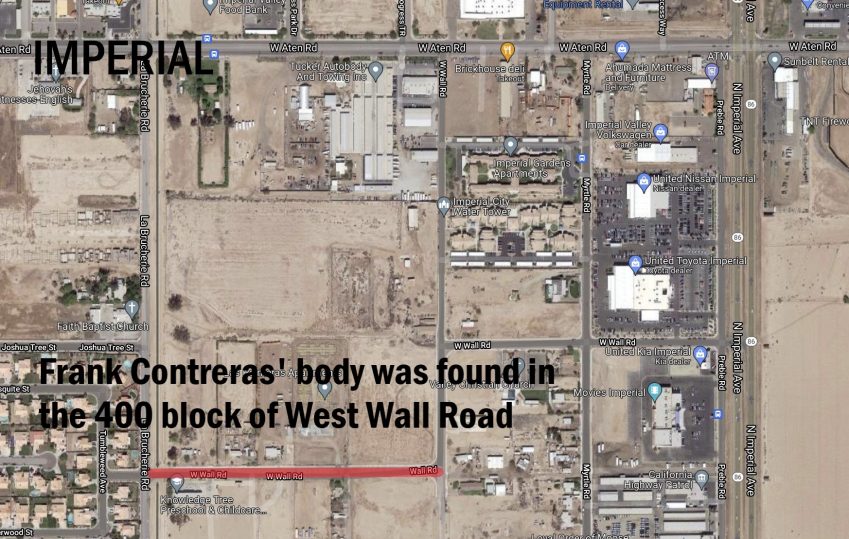 IMPERIAL — The death of a 55-year-old man found in his home with a bag over his head and injuries to his right eye is being investigated as a homicide, according to Imperial police.

Dispatchers received a call on Friday, Sept. 24, at 4:16 p.m. about a man who was not breathing inside a home in the 400 block of West Wall Road. When police arrived at the home, they were told by Imperial County Fire Department personnel the individual had been pronounced dead, according to a Monday, Sept. 27, press release from Imperial police Capt. Max Sheffield.

Witnesses at the scene said the man, identified as Frank Contreras, was found with the bag over his head and “facial injuries to his right eye.”

No suspects have been named in the case and no motive has been established, Sheffield said on Monday evening. He added that it’s too early to say much about the case and that new information likely wouldn’t come until the end of the week.

“The Imperial Police Department Investigations Unit is working to develop leads and requests the public’s assistance,” the press release states.

Sheffield did confirm that Contreras was a resident of the home he was found in and the residence was nearer to LaBrucherie Road, although he was not more specific.

Previous
Stranded in the ER: Can California Change its Treatment of Kids in Crisis?