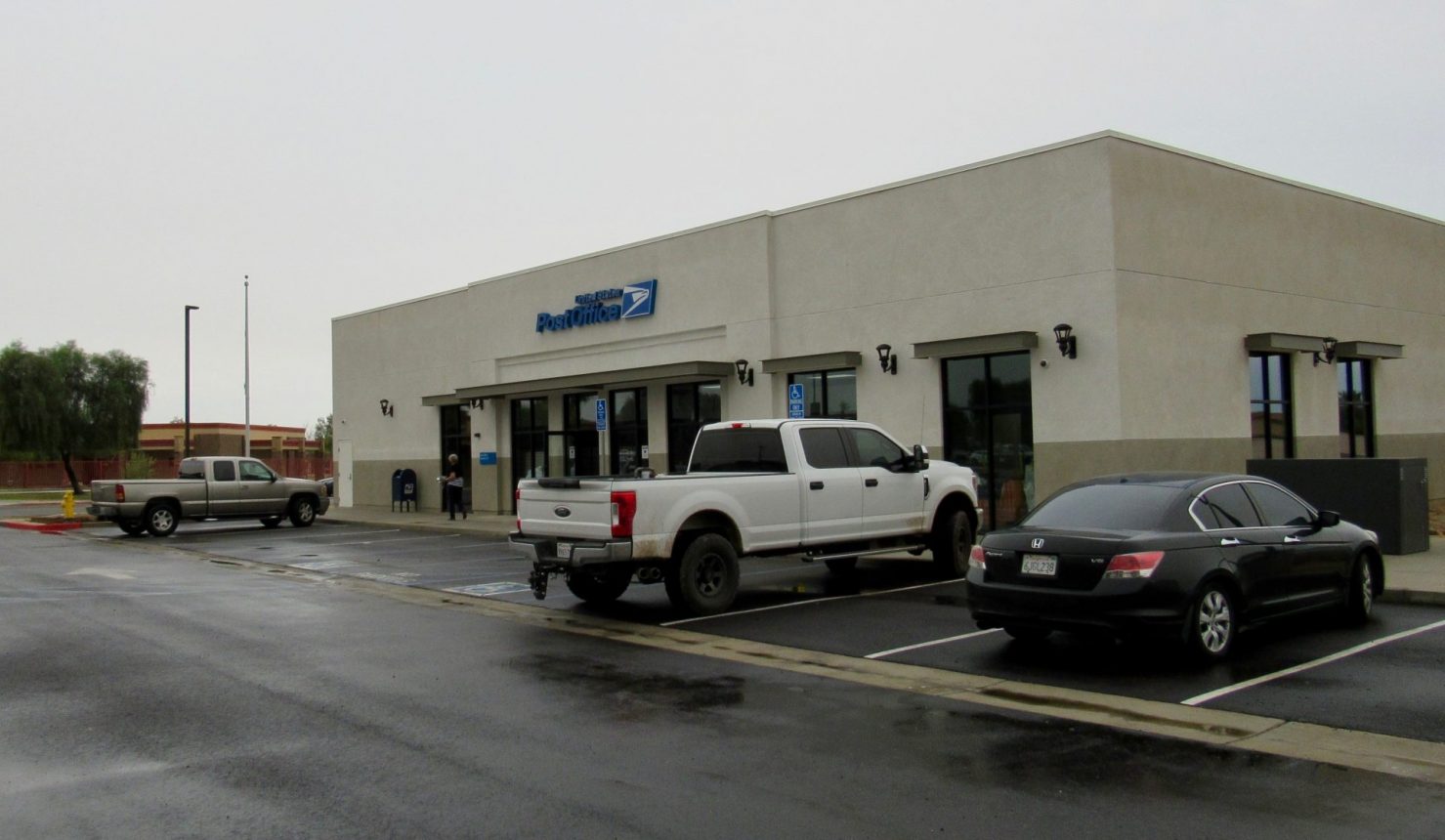 The new Imperial Post Office opens quietly on a gloomy Friday, Sept. 24, the first tenant to begin operations at the Imperial Gateway Center on North Imperial Avenue and 15th Street. With a Starbucks approved to open in the area, questions remain over traffic concerns at the site, which sits to the immediate east of Frank Wright Middle School. | MARCIE LANDEROS PHOTO
Home
Business
In BusinessRegional News

IMPERIAL — The Imperial Post Office quietly opened the doors at its new location on a gloomy, rain-soaked Friday morning, Sept. 24, becoming the first tenant to operate out of the Imperial Gateway Center in the next step of the city’s plan to improve the Highway 86 corridor.

A former announcement that included a 7-Eleven at the site when the Imperial Gateway Center broke ground in October has since been replaced by news of a Starbucks and a McDonald’s, as city officials continue to work on what has the potential to be a traffic issue with nearby Frank Wright Middle School.

The center will also be a focal point of the ongoing $3 million, 3.5-mile Highway 86 Improvement Project.

Located at 820 N. Imperial Ave., the new Post Office sits in a free-standing building at the northern end of the Imperial Gateway Center, a 4-acre development to the immediate east of Frank Wright in an oddly shaped parcel wedged between Imperial Avenue and Highway 86 north of 15th Street.

Some residents didn’t even know there had been a move, although services have largely unchanged; the Post Office is still open from 8:30 a.m. to 4 p.m. weekdays.

“I felt so dumb. I went down to the old post office, and they were closed. I even tried to open the door. That’s when I finally saw the sign,” said Ben Gomez, an Imperial County resident who lives just outside Imperial city limits.

Future of the Imperial Gateway Center

Initially, the plan for the center included a fast-food restaurant, like McDonald’s, and had a convenience store and gas station, specifically 7-Eleven announced its intention to build there in a press release on the ground breaking of the site in October.

Yet in July, the Imperial Planning Commission unanimously approved a conditional-use permit for Starbucks.

The decision to approve the permit did not sail through the commission unchecked, as commissioners peppered Chris Peto of Fifth Street Development Co. LLC, the developer for the Gateway Center, about concerns over traffic and what mitigation measures Starbucks would implement.

Peto assured the commission that the Starbucks planned for the center would be a new prototype, with a 12-car “stack” for the drive-thru and a plan for convenient pickup options. The Planning Commission expressed concerns over the traffic that typically comes with the popularity of a Starbucks at other locations given the morning and afternoon traffic generated by the center’s western neighbor, Frank Wright Middle School.

“If there is a problem on day one, it’s not going to get solved on day two, but it’s going to get solved quickly,” Peto told the commission. “I think as the schools get back in session and people learn how to shop in the shopping center, it’s going to take some time to figure it out, but it should operate OK. But if it doesn’t, (Starbucks has) an obligation to make it work.”

After much debate, the commission settled on requiring Starbucks employees to cone off the driveway that lets out on 15th Street during high traffic periods from the school. The commission also applied a stipulation that delivery trucks and the movement of materials be limited to 6 a.m. to 11 p.m., to help mitigate noise pollution.

Residents and the whomever was behind the city’s official Facebook account, got into a lively discussion on the livestream comments of that July commission meeting, with the city confirming its plan to open access to Imperial Avenue from Highway 86 as part of the city’s Highway 86 Improvement Project.

The Highway 86 Improvement Project is a $3 million project from the federal INVEST in America Act (FAST Act Reauthorization Bill), with support from both the Southern California Association of Governments and Imperial County Transportation Commission, to improve traffic flow, to do the landscaping around Highway 86, construct a multi-purpose trail, and try to create a safe pedestrian and bicycle infrastructure that includes Americans with Disabilities Act access for all community members.

The project is a 3.5 miles long project and extends from Treshill Road in the south end to Ralph Road several thousand feet north of the Imperial Gateway Center site. The Imperial City Council awarded a contract for professional design services on the project to Chen Ryan Associates Inc. in May.

Evidence can be seen of the city of Imperial’s intention for the Gateway Center to be a part of the city’s focus on improving Highway 86 in the city’s zoning for the parcel on which the center sits.

“The subject site at 802 N. Imperial Ave. is currently zoned C-2 Commercial General. This Zoning designation is intended as an area for the location of highway-oriented retail service and wholesale commercial activities such as restaurant, theatre, health clubs, and for neighborhood shopping centers which provide retail business service and office facilities for the convenience of residents of the neighborhood,” according to the Planning Commission’s agenda for the July 14 meeting in which the Starbucks was approved.

City officials also assured the commission itself that any traffic issues caused by the Starbucks would be taken into consideration by the traffic study being conducted for the Highway 86 Improvement Project, creating the possibility that traffic mitigation measures could be worked into that project, intertwining these projects even further.

Next
IN PICTURES: Acura Grand Prix of Long Beach 2021 is a Wrap