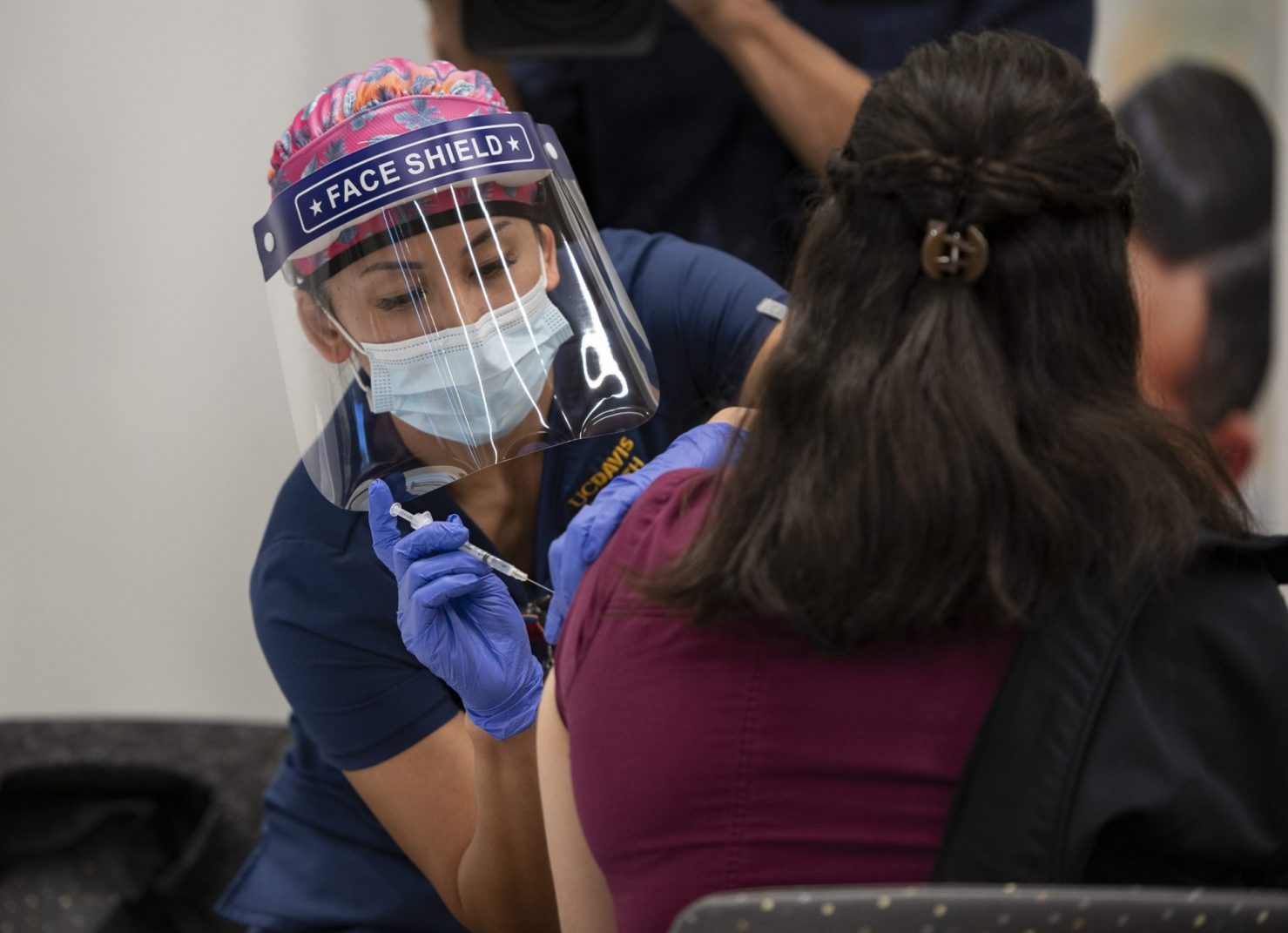 As the state’s COVID-19 vaccination mandate kicks in Thursday, several large hospital systems say 90% or more of their employees are vaccinated. But they don’t have to provide data to the state unless asked.

Kaiser Permanente, Dignity Health, Keck Medicine and other major hospital systems in California say they are well on their way to meeting Thursday’s deadline for the state’s COVID-19 vaccination mandate, with several citing vaccination rates of 90 percent or higher.

California was the first state in the nation to announce that all health care workers must be fully vaccinated. The order, which includes physicians, nurses, technicians, janitors and other workers in hospitals, dialysis centers, doctor’s offices, nursing homes, substance abuse centers and other facilities remains one of the most stringent in the country. Only limited medical and religious exemptions are allowed.

On Tuesday, state health officials issued a new order that extended the mandate to in-home, hospice, disability center and senior center health care workers, but gave them an extra two months to comply, until Nov. 30.

Despite predictions that the mandate would cause severe staffing shortages, many major hospitals told CalMatters that they were confident Thursday’s deadline would not disrupt daily operations. Several large hospitals — with the exception of a major provider in San Diego — said they had only small numbers of requests for medical and religious exemptions.

Hospitals and other health facilities, however, are not required to routinely report their employee vaccination or exemption data to the state or the public. They only need to report it “upon request” from the California Department of Public Health. That data — if it exists — has not been made public. At the federal level, disclosure of employee vaccination rates remains optional.

We anticipate it will be a relatively small number of employees that choose to end their employment as a result of not being vaccinated.”

Kaiser, which issued a company-wide vaccination requirement three days before California’s order was announced in early August, increased employee vaccination 12 percent in the subsequent six weeks, said spokesperson Marc Brown. About 90 percent of Kaiser employees were fully vaccinated as of two weeks ago, he said.

“We anticipate it will be a relatively small number of employees that choose to end their employment as a result of not being vaccinated,” said Dr. Jeff Smith, Cedars Sinai’s executive vice president of hospital operations. He said 97 percent are vaccinated and less than 2 percent have requested waivers.

A lack of state data, however, makes it difficult to determine exactly how health facilities are faring, how many exemptions were granted or whether certain regions or sectors of workers are lagging behind.

Kaiser Permanente, the largest health provider in the state, said there were “small, regional differences” in employee vaccination rates at its hospitals but declined to specify where.

Dignity Health, which operates facilities throughout the Central Valley and in many rural areas of the state, did not specify how many employees were vaccinated, only that the “vast majority” are already vaccinated or plan to be before Thursday.

At Keck Medicine of USC, 92 percent of employees are fully vaccinated and only five people have not been vaccinated or sought a religious or medical exemption, according to Felipe Osorno, executive administrator of operations.

Some health facilities said the state order, which triggered internal education campaigns, made a big difference in encouraging hesitant employees to get their shots.

In February, only 75 percent of California nurses had been vaccinated and 22 percent did not plan to get vaccinated, according to a survey conducted by the American Nursing Foundation. The California Nurses Association has supported vaccination but has stopped short of endorsing the mandate, stating “all eligible people should be vaccinated, while respecting the need for medical and religious accommodations.”

Nurses are among the most highly vaccinated groups at Stanford Health, according to David Jones, chief human resources officer. “We have not seen this issue among our nurses. Our nurses are one of our highest vaccinated groups at around 97 percent” compared to the 95 percent all-staff rate.

Nurses’ opposition to vaccine mandates has become a lightning rod throughout the pandemic, with some people staging protests in California and across the country. In New York, nearly 3,000 workers rushed to get vaccinated one week ahead of the state’s Monday deadline, but lawsuits and worker demonstrations have roiled health systems, forcing state officials to prepare to bring in the National Guard and other emergency staff should too many remain non-compliant.

Earlier we saw lower vaccination rates in cleaning and cafeteria staff, which overlaps with Latino and Black populations significantly.”

State and federal vaccine mandates have helped close the gap on vaccination disparities among Keck’s health workers, which mirror those in the general population, Osorno said. About 99 percent of Keck’s physicians are vaccinated but other employee groups are less likely to be fully compliant.

Statewide 29.7 percent of Latinos are vaccinated despite making up 39.4 percent of the eligible population. Among African Americans, 5.7 percent are vaccine eligible but only 4.2 percent have been vaccinated, according to state data.

“That to me is one of the saddest statistics coming out of the pandemic — the continued disparity of vaccination among Blacks and Latinos,” Osorno said. “Being Latino myself, it’s horrendously painful.”

Education campaigns and individual conversations with Keck employees who were concerned about side effects and other issues helped raise the vaccination rate for cleaning staff from 25 percent to 80 percent.

The state order does not apply to dental offices, although they must comply with a previous order that allows employees to undergo regular COVID-19 testing in lieu of vaccination, the California Dental Association said.

The state deadline comes one week after the federal government authorized Pfizer booster shots for those who work in high risk settings, including health care.

A 50% Coupon for One Tool? Gardeners Call California’s Subsidy Inadequate

Although the CDC indicated it would not yet change its definition of “fully vaccinated” to include three shots instead of two, California agencies are monitoring federal recommendations and have released a statewide vaccination plan, Health and Human Services Secretary Dr. Mark Ghaly said last week.

“We are preparing and considering what it will mean for the 2.5 million health care workers in California and looking at how it impacts the requirements for so many of those individuals to be vaccinated,” Ghaly said.

For the moment, there are no plans to adjust the statewide vaccination order, according to the California Department of Public Health, especially since those who received the Moderna or Johnson and Johnson shots are not eligible for a booster.

“Everything we’ve heard so far is that boosters would probably be optional,” Osorno said.

In some areas of the state where masking and vaccination protests are widespread, hundreds of employees have submitted exemption requests. In San Diego, 700 employees at Sharp HealthCare requested religious waivers and 100 requested medical waivers, according to Chief Operating Officer Brett McClain. As of two weeks ago, about 88 percent of Sharp’s staff were fully vaccinated. Down the road at Scripps Health, 571 employees requested waivers, and 93 percent are fully or partially vaccinated, a spokesperson told CalMatters.

“Close to 90 percent of (requests) right now are generally in the sense of somebody who identifies as Christian…stated around ‘my religion tells me my body is my body, and I control what goes into it,’” McClain said. Waiver requests have also stated religious opposition to the use of stem cells in the creation of vaccines, although the COVID-19 vaccine does not contain stem cells.

There are enough holdouts to worry Sharp administrators faced with escalating patient numbers and dwindling staff due to pandemic-related burnout. Turnover among some nursing departments has doubled in the past six months, McClain said.

“My concern is we’ve got about 20,000 employees and we still have about 1,000 employees who have not been vaccinated and have not applied for an exemption,” McClain said. “We’re getting to crunch time for sure.”

Those employees have stated they are going to leave the state or leave health care, he said, but President Joe Biden’s sweeping vaccine mandate for large employers and federal contractors will make it increasingly difficult for the unvaccinated to find alternate employment.

“This is going to be almost every employer in the country,” Osorno with Keck Medicine said. “This is not just us. We believe very heavily in vaccination, but this is something that (workers) are going to face everywhere.”

(This Kristen Hwang story first appeared on CalMatters and is made available as part of the CalMatters Network.)