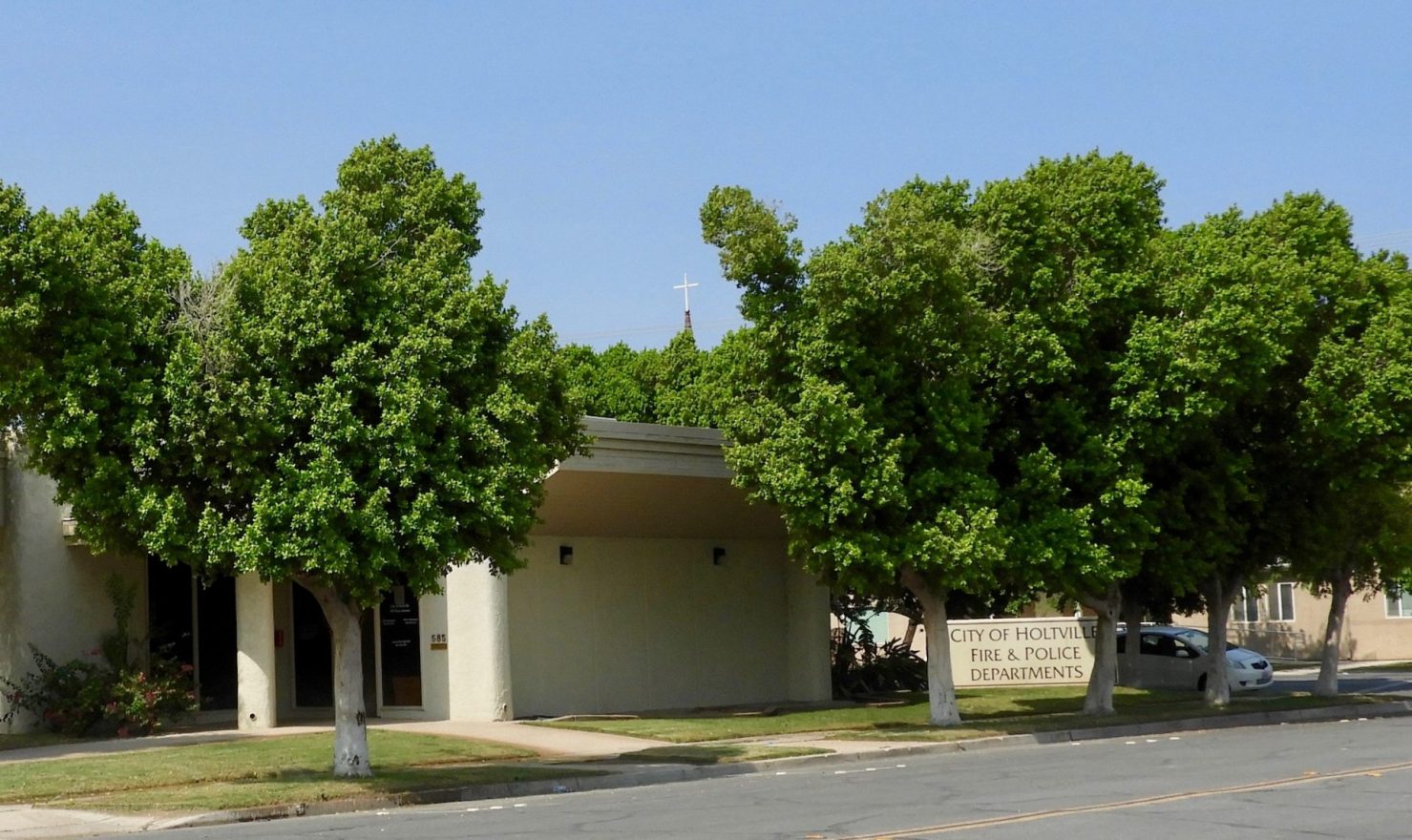 The old Holtville police station, which serves as the Holtville substation of the Imperial County Sheriff’s Office, sits quietly with its doors locked on Tuesday, Sept. 28, due to the ongoing COVID pandemic and a sign on the door to call the sheriff's dispatch center for services. | MARCIE LANDEROS PHOTO
Home
Featured Stories
In Featured StoriesLocal NewsPublic Safety

State Program Provides $100,000 Annually to Each Valley City, the County to Defray Costs

HOLTVILLE — For nearly a dozen years, the Imperial County Sheriff’s Office has kept the citizens of Holtville safe, acting as its police force under contract to the city.

“We provide all law enforcement services to the city of Holtville, including but not limited to, patrol, traffic enforcement, traffic control, city ordinance enforcement, and all public and school related calls for service,” according to sheriff’s Sgt. Roy Patterson.

Patterson, who also holds the title of Holtville’s police chief, is in charge of local operations, and supervises the deputies assigned specifically to the city, with the exception of the animal control department, which remains under the control of the city.

But we’re not telling the citizens anything they don’t already know. What might be news is some of the mechanism Holtville and other governmental agencies around the Imperial Valley use to help pay for their police services.

For a city the size of Holtville, it costs roughly $940,000 to run its police services, and on Monday night, Sept. 27, the Holtville City Council voted to draw its $100,000 allotment from the state to pay for law enforcement salaries, which makes up a little over 10 percent of the cost to fund those services.

“This is just business as usual; all the cities in the county are receiving them,” said Holtville City Manager Nick Wells of the California Citizen Option for Public Safety (COPS) Program funding used to offset the cost of contracting law enforcement services.

The COPS program was originally created in 1996 by the state and provides annual funding for front-line law enforcement, county jails, district attorneys, and juvenile justice programs for each law enforcement jurisdiction in the state.

Decisions on how much every jurisdiction receives is based on the percentage of the state that lives in that jurisdiction, and so with only 0.12 percent of the state’s population living in Holtville, it qualified for the minimum amount.

Holtville isn’t alone in receiving this money, the COPS Program allotted $800,000 to Imperial County total, which has a total 0.94 percent of the state’s population. Some $100,000 goes to each of the seven incorporated cities — Holtville, Imperial, El Centro, Calexico, Westmorland, Brawley, and Calipatria — and $100,000 goes for the unincorporated county.

Holtville has been contracting with the Imperial County Sheriff’s Office to provide police services since January 2010, so the $100,000 will be applies to offset those costs, Wells said.

The Holtville council voted to establish a new account with the California Department of Justice to conduct fingerprint background checks for new hires, but the council opted to limit who will be fingerprinted to specific types of employees during its meeting Sept. 27.

Every agency that has applicant fingerprinted must have an Originating Agency Identifier code, which is connected to a specific person, known as a custodian of records. Holtville had an authorized custodian of records with an ORI, its personnel technician, but that employee has since left the city, deactivating Holtville’s ORI code.

“We basically have to start over. We have been relying on the Sheriff’s Department in the interim (to conduct fingerprinting), but we need to get this started,” Wells said.

As of Jan. 1, 2011, before Holtville can become authorized by the Department of Justice to do fingerprinting, the DOJ must approve the city’s new custodian of records, which will be responsible for hiring decisions, for the care of the criminal records furnished to Holtville, and will serve as the contact for the DOJ for any related issues.

While establishing a new custodian of records, the City Council also voted to limit which new employees will be fingerprinted.

“We will still be fingerprinting anyone who works with the public, the finance department, people like that,” Wells assured the council before the vote.

Holtville had been conducting fingerprinting on all incoming employees before switching to using the Sheriff’s Department, but moving forward, the city’s policy will be to limit fingerprinting to safety personnel, employees that will interact with the public, and employees who work with sensitive information.