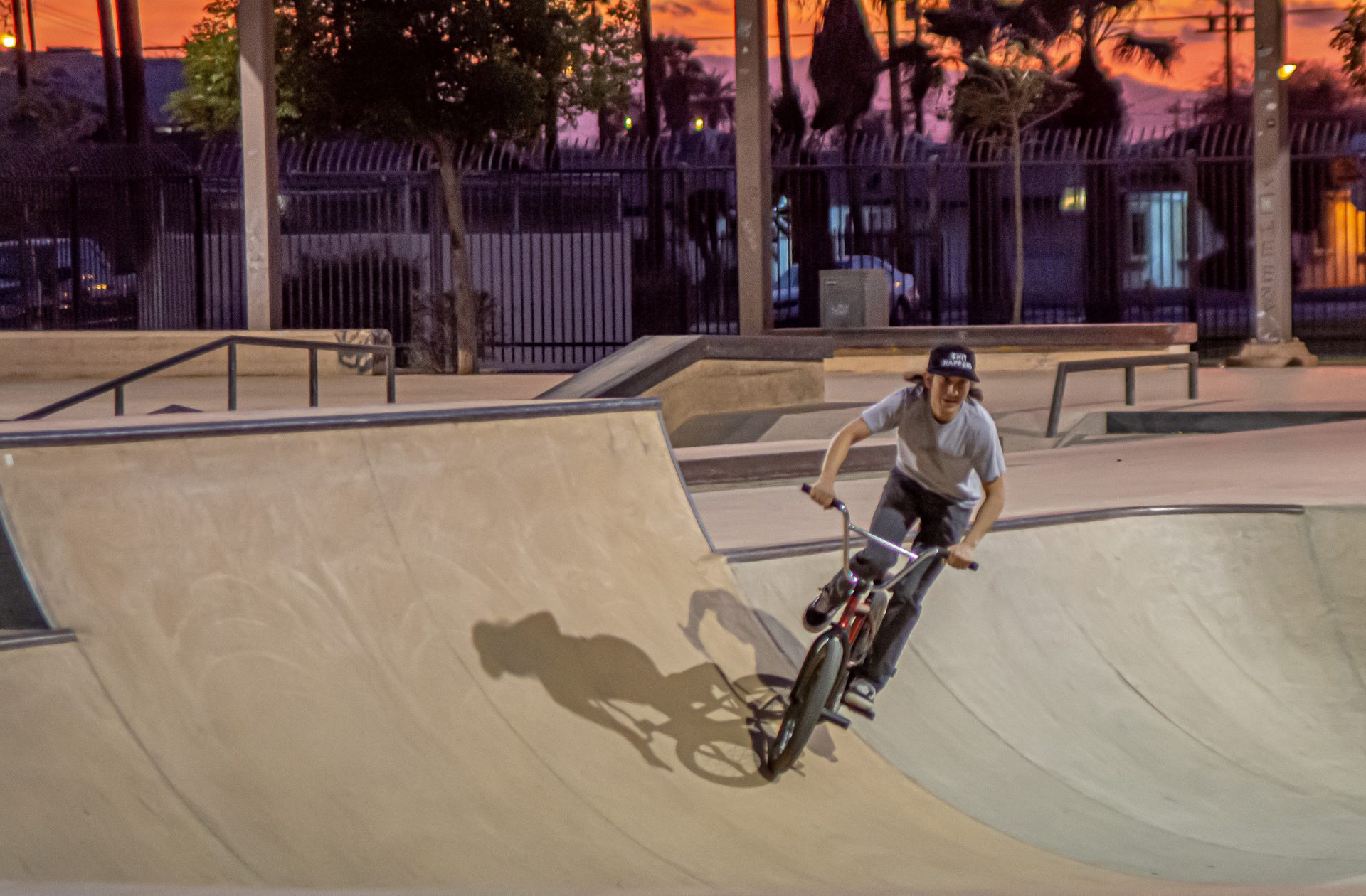 A teenage bicyclist runs the course at El Centro’s Sidewinder Skatepark early in 2021. The El Centro City Council on Oct. 16 will consider its library board’s recommendation of renaming the skatepark to Brett Driscoll Sidewinder Skatepark in honor of the late El Centro resident who was instrumental in helping to get the park built and had been advocating for one for decades. The meeting will occur on the two-year anniversary of Driscoll’s death. | CAMILO GARCIA JR. PHOTO
Home
Regional News
Share

EL CENTRO — Prior to his passing two years ago, Michael Brett Driscoll had enjoyed a wide reputation as an accomplished action sports racer, business owner and youth sports advocate.

Now, with a recommendation to have the local skatepark that he spent decades advocating for bear his name, his legacy is poised to continue to reach future generations.

The proposal, which the El Centro Library and Community Services Board unanimously supported during its Sept. 9 meeting, is scheduled to come before the City Council on Oct. 19 for its consideration.

If approved by the council, the proposal, submitted by Driscoll’s father, Mike Driscoll, would amend the skate park’s formal name to Brett Driscoll Sidewinder Skatepark.

While renaming the city’s public facilities can be an arduous and, at times, controversial affair, the current proposal has been largely free of any such obstacles.

The city’s criteria for naming a public facility or space in honor of a community member requires that the individual have attained prominence through their contributions to the community or the nation.

In the case of Michael Brett Driscoll, known affectionately as Brett, the skatepark itself counts as just one of the many contributions he has made to El Centro and the wider Valley community.

“He’s one of the pillars who made it happen,” said Ruben Najera, business owner, professional skateboarder and former member and manager of the skateboarding team Driscoll sponsored through his El Centro business, Driscoll’s Surf and Skate Shop.

Indeed, prior to the skatepark’s completion in 2015, Driscoll had been openly advocating for decades to have one built in El Centro. He teamed up with Najera and close associates Carlos Gonzalez and Anastasia Miki to form the Desert Skatepark Coalition more than 10 years ago to promote such an endeavor.

The coalition then partnered with the city of El Centro to successfully apply for a state grant to fund the construction of the $2.5 million, 30,000-square-foot Sidewinder Skatepark.

“There’s no one else they could possibly name it after that would make sense,” said Najera, who operates Metahumans Comics. “They shouldn’t even be considering it. It should be a no-brainer.”

Brett Driscoll died at the age of 56 three days after he suffered a heart attack on Oct. 16, 2019, while riding his mountain bike in El Centro.

The City Council’s vote on whether to amend the skatepark’s name in his honor will come on the two-year anniversary of his death, a coincidence that is not lost on his father.

In his application to the city to have the skatepark renamed in his only child’s honor, the elder Driscoll highlighted his son’s longtime commitment to the community, which took the form of managing a variety of youth sports teams, giving away free skateboarding products to kids who couldn’t afford new items, sponsoring skateboarding exhibitions and competitions in the parking lot of his business, and pushing for the construction of a skatepark.

“It wasn’t a one-shot thing,” Mike Driscoll said. “It was over 40 years of doing everything he could to get something like that in the Imperial Valley.”

The idea for the skatepark took root when Brett Driscoll was just a teen. His repeated visits to San Diego, where the skateboarding scene was more prominent, had convinced him the Valley needed to do more to support skateboarders and other action sports enthusiasts.

There, locals could find the latest in fashionable surf and skate apparel and professional gear, as well as hang out with their peers.

“The only reason we opened the store was because of Brett,” his father said.

Soon enough, the younger Driscoll got it in his head to build a half pipe for skateboarders and BMX riders behind the State Street business. He even went so far as to partner with the Boy Scouts of America to create a skating troop whose insurance coverage eliminated any liability issues for the business.

“I couldn’t believe he could do that,” Mike Driscoll said.

Brett Driscoll’s other remarkable accomplishments included helping coach a youth flag football team that was sponsored by the National Football League, which went on to win a national and international championship in Florida and Mexico City, respectively.

The flag football team even had the opportunity to play an exhibition against the El Centro Fire Department’s team during the halftime of a San Diego Chargers football game. As exciting as it was to have local youths participate in such an endeavor, it was just as exciting to have announcers in far-flung locales acknowledge the kids’ hometown.

“It was just a really rewarding feeling for everybody to hear El Centro’s name over the (public address) system,” Mike Driscoll said.

When the city’s Library and Community Services Board announced in July that it was considering a proposal to rename the skatepark to honor Brett Driscoll, it received considerable feedback in support of the effort, Community Services Director Nava said during the board’s Sept. 9 meeting.

One such supporter was Driscoll’s childhood friend and former co-worker Mike Hardaway, who appeared at the Sept. 9 meeting to voice his support for the renaming effort.

“I challenge anybody here to go by there any night and see how many people would be out on the streets doing something maybe not right,” Hardaway told the board members and those present. “They’re there having actually a pretty decent time.”

Nor did Hardaway shy away from referring to Driscoll as a Valley legend whose legacy deserved to be memorialized in a public setting.

“Those legends need to live on so that other generations know what they did,” Hardaway said.

The skatepark’s name was originally suggested by Sunflower Elementary School sixth-graders who were tasked with selecting a name and logo as part of the grant award.

And while some of the board’s members made it clear they recommended retaining “Sidewinder” in the skatepark’s name as part of the renaming proposal, both Hardaway and Desert Skatepark Coalition president Najera expressed a preference for having the reference dropped in place of Driscoll’s name.

If anyone is deserving of having the skatepark named in their honor, that person is Brett Driscoll, said Christ Community Church Pastor Walter Colace, Driscoll’s longtime friend and fellow 1981 graduate of Central Union High School.

Colace had presided over Driscoll’s memorial services in October 2019, which drew a capacity crowd as well as a procession of dirt bike riders who paid homage to Driscoll’s passion for racing. Aside from dirt bikes, he had also raced three-wheelers, quads, and jet skis in the past.

Yet, Colace said that what he will remember most about Driscoll is his spiritual yearnings.

“A lot of people didn’t know that side of Brett,” Colace said.