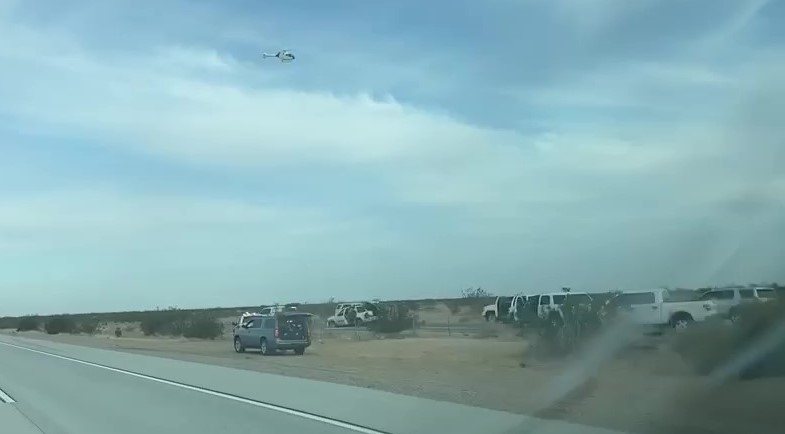 An unidentified female pedestrian was struck and killed on the eastbound side of Interstate 8 about 22 miles east of Holtville, one mile east of Brock Research Center Road, early Wednesday morning, Sept. 29. A U.S. Border Patrol helicopter can be seen circling overhead. | VIDEO CAPTURE
Home
Local News
In Local NewsPublic Safety

HOLTVILLE — A 32-year-old woman from the Mexican state of Guerrero was struck and killed by a motorist as she walked across eastbound Interstate 8 east of Brock Research Center Road about 22 miles east of Holtville on Wednesday morning, Sept. 29.

The driver of the vehicle, identified as a 37-year-old El Centro man driving a 2006 Mazda, did not sustain any injuries during the 5 a.m. incident that had temporarily closed eastbound traffic, the California Highway Patrol Winterhaven Station reported.

The woman’s next of kin had yet to be notified, so her identity was not immediately available from the county Sheriff’s Office’s coroner’s division, a representative said.

The incident remains under investigation by the Highway Patrol, which did not have any information available that indicated the woman may have been a migrant who had entered the country illegally, Officer Michael Mitchell said.

The woman reportedly was walking from the highway’s southern edge to its northern side when she was struck by the vehicle travelling in the roadway’s fast lane, a CHP incident report stated.

The incident occurred prior to dawn, when lighting conditions remained dark and with partial cloud cover, CHP reported. The vehicle in question was not able to avoid colliding with the woman who had crossed the lane directly in its path, CHP reported.

Video from the scene by a passerby that was sent to this newspaper shows at least two unmarked vehicles, one of which appears to be a white older-model SUV in an odd position.

A U.S. Border Patrol helicopter can be seen circling overhead in the video, which shows a number of responding agencies.

Shortly after 5 a.m., an El Centro Sector agent assigned to the Calexico station came across an unresponsive individual in the median of the interstate, said Agent Carlos Pitones in an email. The agent discovered the individual and made the proper notifications. Border Patrol had no involvement other than discovering the person, Pitones stated.

(This story was updated at 4:20 p.m. Wednesday, Sept. 29, with additional information from the California Highway Patrol’s Winterhaven station.)